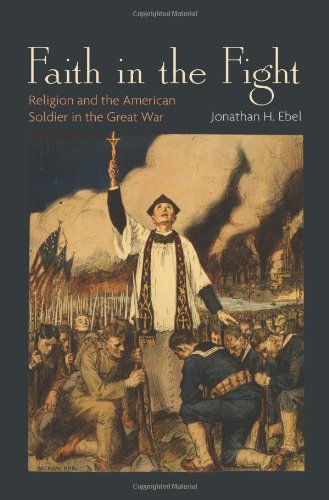 Faith in the Fight: Religion and the American Soldier in the Great War
Jonathan H. Ebel
Princeton University Press, 2010
272 pp., 29.95

Americans in World War I.

Perhaps no word is more deeply associated with World War I than "disillusionment." In the compulsive attempts of the second half of the 20th century to tell secularization narratives, one prominent version had religious faith never recovering from the shell-shock it got in the trenches, 1914-18. Jonathan H. Ebel, in his well-researched and persuasively revisionist study Faith in the Fight: Religion and the American Soldier in the Great War, convincingly demonstrates that this loss-of-faith story is wrong, at least for Americans.

Ebel's well-chosen focus for his study was to uncover the lived religion of ordinary people, especially soldiers and war workers such as nurses, as they experienced World War I. What he found is that they actually pursued the war effort with buoyant faith. The Marine aviator Walter Poague wrote home in February 1918, "This is not a terrible war. It is the most wonderful war in the world. It is the war which means the real salvation of the world." Another soldier reported, "I have made my Communion, and go with a light heart and a determination to do all that I possibly can to help in this fight against evil, for God and humanity." In a breath-taking spiritualization of the situation, a nurse defiantly pronounced, "I believe there is more real peace on earth in men's and women's hearts now in the midst of this world turmoil than has ever been known before."

While these sentiments might reflect attitudes before disillusionment set in, such a change in regard to the conflict (if or when it came) did not usually extend to weakening religious convictions. After the war had been over for a year, the state of Virginia began conducting a survey of its veterans. Most usefully, it included the question: "What effect, if any, did your experiences have on your religious belief?" The responses are filled with affirmations that the war had made their faith "stronger," or taught them to "serve the Lord better," or led them to "believe more firmly."