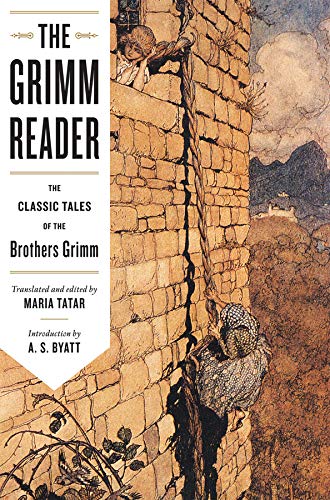 The Grimm Reader: The Classic Tales of the Brothers Grimm

What to say about fairy tales.

Something there is in fairy tales that brings out the worst in literary critics. Or stirs to life the inner critic in novelists, philosophers, and psychiatrists. From Dickens to Chesterton, from Sartre to Derrida, from Jung to Bettelheim—everybody, upon reading this stuff, wants to say something profound. Especially, of course, about the stories collected in the early 19th century by those German brothers, Jacob and Wilhelm Grimm. These fairy tales are so simple, you see, they must be complex. They're so earthy, they must be symbolic. They're so chaotic, they must be formulaic. They're so strange, they must be wise.

Take, for example, the new collection, The Grimm Reader, translated and selected by Maria Tatar, chair of Harvard's folklore department. You don't actually have to read the book. In some sense, we never read the Grimms' fairy tales anyway; we only reread them, for they exist in the air we breathed in as children even before we learned to read. But let's take the book and write a standard review—the review you'd read in any of a dozen magazines, any of a hundred newspapers.

It would open with some general observation of the magic spell cast by fairy tales—and by an iron law, the word enchantment has to appear somewhere in the first two paragraphs. Fairy tales, you understand, "lower their glittering buckets deep into the psyche's well." They are "stories made to summon wonder, horror, enchantment." They remain in the mind, "uncanny in the purest sense of the word, which is to say, both bizarre and familiar at once." They "truly possess an inexhaustible power. Children hold on tight, turn pale, close their eyes, and beg for more."

Thirty years ago, it would have been routine to speak, at this point, of the great psychological insight of fairy tales. Harold Bloom once remarked that the only problem with Freud's literary criticism is that it leaves us with the uncomfortable feeling that Shakespeare is a better reader of Freud than Freud is of ...