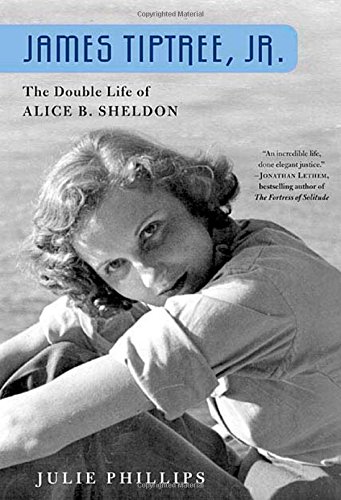 Another Stranger in a Strange Land

Writers drawn to speculative fiction have always been, well, different. In his essay "A Novel about the End of the World," Walker Percy describes the type of writer willing to risk the hazards of being associated with science fiction. This writer has a prophetic streak and is explicitly concerned with the dissonance between man and environment. So instead of dealing with familiar characters and plots, "he is more apt to set forth with a stranger in a strange land where the signposts are enigmatic but which he sets out to explore nevertheless." In other words, the speculative writer usually sees the world as it is as so strange and alien that nothing short of truly alien and strange will do to describe it.

Readers fortunate enough to have discovered James Tiptree, Jr., in the 1960s and '70s were ushered into such strange lands with even stranger characters. Tiptree, winner of multiple science fiction awards, was best known for wild and hard-hitting stories like "The Last Flight of Dr. Ain," which tells, backward, the story of humanity's destruction, and "Houston, Houston, Do You Read?": three male astronauts who have been sent ahead in time slowly discover that Earth has been beset by a plague that reduced its population to 11,000 people—all female—who reproduce by cloning. A favorite of mine is "The Girl Who Was Plugged In," a story about a deformed young woman who willingly hides her real person underground in order to "live" neurologically through a beautiful model. The woman sacrifices many of her sense perceptions (due to lack of bandwith) in order to be admired by others. Like all great science fiction, this story concerns itself less with the question of fantastic technology and more with the desires that fuel it; in this case, the self-loathing at the core of our demand for cosmetic surgery and increasingly virtual identities. Like Shelley's Frankenstein, "The Girl Who was Plugged In" spawned its own "hideous progeny," including the subgenre of cyberpunk. William Gibson's Neuromancer, the Matrix films, and Joss Whedon's TV series Dollhouse are all in its debt.

But Tiptree's characters were not the only strangers in a strange land. "Tiptree" was a name that Alice B. Sheldon had gotten from a jar of marmalade when she decided to begin her formal writing career, at age 51, in 1967. She kept her identity concealed for almost ten years, even as she continued an often flirtatious epistolary relationship with some of the best science fiction writers of the time, including Ursula K. Le Guin. As Sheldon later explained, "I had the feeling that a man would slip by less observed. I've had too many experiences in my life of being the first woman in some damned occupation."

Thanks to a readable biography by Julie Phillips, Tiptree's fans can see that this double identity was just the tip of the iceberg (as it were). Tiptree's sometime secretary Donna Risso might have said it best: Sheldon was "no more an average woman of her day than the man in the moon." Born in 1915, Alice Bradley was the only child of a famous high-society Chicago couple, Herbert and Mary Hastings Bradley. Mary was a well-known travel writer, and as a girl Alice spent many days in Africa. Known to her friends as Alli, she grew up to become a strikingly beautiful woman who never felt at home with herself. She resisted the expected debutante life, married a man she knew was not right for her (and who purposely shot at her once), divorced young, and served with the WAACs in World War II. After she remarried, she worked for the CIA, owned and operated a chicken farm, earned a PhD in psychology, and started, but never finished, two major academic book-length projects. Although she later identified herself as a lesbian, she struggled with her sexual identity throughout her life, even while happily married to Huntington "Ting" Sheldon. She suffered from clinical depression, was addicted to speed and other drugs, and eventually carried out a planned suicide plot by shooting first her husband and then herself in 1987.

The point of biography is to flesh out these bare facts, and Phillips delivers. She details the history of Sheldon's disquiet, showing how she turned to fiction to try to find a language for her overpowering feelings. Sheldon's stories verify her belief that "we are born with desires which it is impossible to satisfy, and only by a violent effort in the direction of artificiality and paradox can life be enjoyed at all." But Phillips does not succumb to the temptation to blame Sheldon's depression on repressed homoeroticism, and it is not at all clear that Sheldon would have been happier if she had felt more free to pursue an openly lesbian lifestyle. It is safer to say that she grew up in an era that provided very few role models for women who did not see themselves primarily as wives and mothers. She tried unsuccessfully to get pregnant, and commented often on how troubling the landscape was for women like her. "I would like to be a 'woman.' And yet, I look in vain for women—that is, persons who are something characteristic which is neither childish, male, nor maternal." Sheldon once responded to an article in Life magazine by Margaret Mead that told women that while they were free to do what they wanted, they should remember that marriage and children were their ultimate fulfillment. Sheldon's response? "Jesus Christ. I puke."