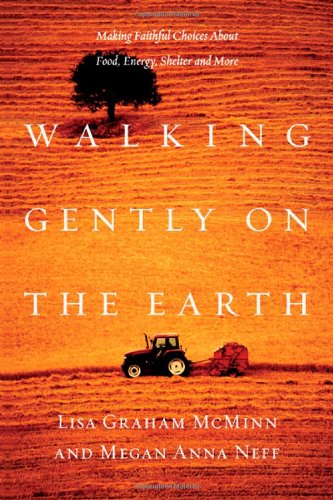 Wait—don't turn the page. You may be weary unto death of books that make a Christian case for creation care, even as you share their core convictions. Many of these earnest jeremiads interweave dense and joyless catalogues of environmental crises with heavy-handed explications of Scripture. Others are written from the perspective of the environmental naïf eager to recount changes in lifestyle that he or she has made and that you can make, too. Fortunately Walking Gently on the Earth, written by Lisa Graham McMinn and her daughter, Megan Anna Neff, is something altogether different.

Not least, Walking Gently is different because it avoids the usual hand-wringing about the church's miserable failures in the area of creation stewardship. The lack of this sentiment is especially encouraging, not only because such a reprimand is demoralizing, but also because it's not true. From the land ordinances in Leviticus to the work of Basil of Caesarea, Jonathan Edwards, and Francis Schaeffer, believers' history of compassionate stewardship is long and robust, even if it doesn't make as much noise as the larger late 20th-century environmental movement.

And the authorial collaboration between mother and daughter, which might sound like little more than a marketing strategem, adds to the book's appeal. Most of Walking Gently was written by McMinn, but Neff preludes each chapter with a meditation on an Akan proverb from Ghana. These framing reflections spring from Neff's work with the Church of Christ in Ghana and underscore the book's emphasis on living responsibly as an act of compassion for the poor. And although Neff willingly plays the part of the creation care newcomer, over the course of the book her meditations deepen to reveal how her rich theological training and international experience shape a life of disciplined stewardship.

McMinn's chapters complement her daughter's insights with solid research and practical suggestions. They demonstrate her familiarity with environmental topics ranging from en vogue homesteading subjects (backyard chicken-raising and garden-growing) to the harder science (and harder conversations) centered on climate change and population growth. Whatever the subject at hand, the discussion is always informed by the two central tenets of the book. Neff best expresses the first of these: "I am not above it all, a human director of plant and animal life. Rather, I am an integral part of this grand symphony of creation, which only God transcends." The second is that, for Christians, "loving others depends on our attending to creation because people's well-being depends on a healthy planet."

Throughout the book, McMinn's voice is candid, guileless, and trustworthy—important attributes given her potentially skeptical audience. Occasionally her candor reveals either naïveté about or insensitivity to some Christians' enduring resistance to environmentalism. For instance, her assertion that, due to climate change, "Fewer of us may inhabit the planet, which is probably a good thing for the other creatures trying to make a go of it for themselves and their offspring," seems brash in a book that is otherwise careful to avoid thoughtless commentary.

In general, McMinn's strong suit is summing up complex issues (slave labor, energy, agriculture, climate change, and population), acknowledging the disparate perspectives on each, unmasking prejudices about them, and still keeping our attention. Her sharp sociological scalpel cuts through the cultural assumptions that tend to guide much of the church's thinking on environmentalism. She unearths, instead, Christ's relentless call to compassion as the basis for a stewardship that is inexorably attached to the moral development of the Christian.

Take, for example, the subject of "animal misery"—as McMinn calls it—in agriculture. The phrase briskly asserts a level of sentience that we often hesitate to attribute to animals and challenges that same hesitation. But in this book, the challenge isn't bound to a defense of "animal rights," an insistence on animals' parity with humans, or fear over industrial agriculture's threats to our health. It is bound, unequivocally, to the injunction that a Christian adhere to the virtues of obedience, humility, courage, and mercy. In other words, it is tied to a standard that, unlike the debate over animals' rights or the science regarding their capacity to feel, will not shift. "Animals are first and foremost God's living creatures," McMinn writes:

They are not primarily ours …. Since they need many of the same things we do—sun, good water, clean air and fertile soil—their ability to relish in the abundance of a healthy planet and in having space to do the creaturely things God hard-wired in them to do is dependent on us. In this day of corporate farming and feedlots it takes courage and fortitude to treat animals respectfully, protecting their creaturely lives even as we use them for our own ends.