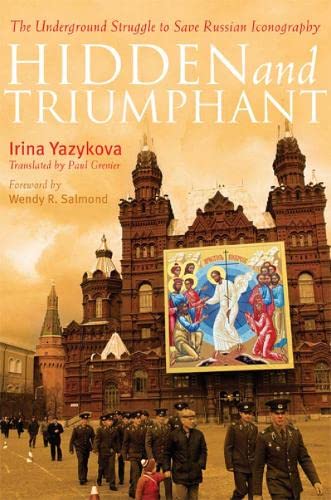 Iconography during the Soviet era.
September/October 2010

Among the illustrations in this volume there is an AP news photo from the Russian district of Bogorodsk, dated 1950, of a crowd of people carrying icons out of a church. This isn't a religious procession; instead, they are handing the paintings up to a man standing in a farm cart. Though it is cold—you can tell from the bundling garments and fleece-lined caps—the crowd looks energetic and happy, and a pretty young woman at the center of the photo looks particularly joyous. In the foreground a boy is holding a small icon, perhaps of Christ. The cart is already overflowing with these paintings of saints and biblical figures on wooden plaques. The load is going to be hauled out of town and burned.

How can we comprehend what this photo would mean to Russian Orthodox Christians? We could imagine that, instead of icons, the happy crowd is raiding an art museum and bringing out priceless paintings to be destroyed. Or we could picture them carrying Bibles, every Bible they can find, from low-cost pew copies to big family Bibles, and personal Bibles full of notes and underlining. Or we could imagine them carrying out photos of the people we love—our mothers and grandmothers, our sweethearts, our children—tossing them all into a cart to be destroyed.

All three meanings would overlap for a devout Russian Orthodox watching this scene, and even those who have not experienced the use of icons in worship can grasp that they are charged with significance and dearly loved. Icons provide a focal point for the expression of faith, and no image is as charged with power as that of a beloved face. If you wanted to destroy a nation's faith, you would have to destroy their icons.

Irina Yazykova's book traces the history of iconography during the Soviet era, but the fate of existing icons, like those in the photos, occupies only a small part of the story. She is primarily concerned with the process of icon-making, an art passed down from master to student in Russia since its conversion to Christianity in AD 988. But if all the living icon painters were persecuted, locked up, and killed, how could the method of iconography be transmitted to the next generation?

It wouldn't be as simple as looking at an existing icon and making a copy. The method is itself a form of prayer. An iconographer begins with a wooden panel and covers it with successive layers of gesso and linen. She traces in the outline of the person or event she intends to depict, and prepares the first paints: powdered minerals mixed with egg yolk and water. (Because dried egg yolk is somewhat translucent, when light hits a finished icon it will reflect back from the white gesso underneath.) The paint is very thin and the brushes delicate, so the work goes quite slowly. Instead of working on one area of the painting at a time, the artist completes all the darkest colors first, then works up gradually to the lightest. At the end, dashes of brilliant gold and white—"enliveners"—complete the image.

During the entire time the iconographer prays and fasts. She will maintain an inner gaze toward Christ and the brothers or sisters in faith whom she seeks to present; she will abstain from meat and dairy products, or follow whatever fast her spiritual mother or father has advised. Her task is not creative, in the usual sense of being an exercise of self-expression. She is more like a Bible scribe of ancient times, aiming to faithfully pass on the truth she has received. For this reason, the art of making icons is often termed "writing" rather than "painting"; an icon presents the figures and events of the Bible and church history in paint rather than ink.

As the Bolshevik Revolution aimed to destroy the faith of Russian Christians, it disrupted, as well, the tradition of personal training in the painting of icons. Yazykova tells us that, in the years just before World War II, Maria Sokolova was perhaps the last remaining iconographer in the country. The "Red Terror" of the 1920s and '30s had inflicted great suffering on the Christian population. "Churches were being demolished and defiled, monasteries disbanded …. The ranks of the clergy were being decimated … and the authorities were waging a campaign of antireligious propaganda in every corner. Not the best time, one would think, to be painting icons."

Sokolova had already been fired as a schoolteacher for refusing to deliver a classroom lecture praising atheism. Now she traveled across the country seeking out boarded-up churches and monasteries, making copies of the ancient icons. "It is difficult to even imagine the courage, at the very height of the Soviet state's antireligious campaigns, of this woman … demonstrating an interest in this 'ideologically alien art,' " Yazykova writes. "But when she saw her country in a state of moral and physical collapse, Maria Sokolova viewed it as her duty, and made it her personal mission."

This might strike us as a mission that, no matter how brave, is of unclear value. At a time that calls for martyrs, do you really need to be making paintings? But in the culture of Eastern Christianity, holy icons preserve and transmit the faith in much the way Scriptures, Creeds, and liturgies do. The interior of a church may well be covered, walls and ceiling, with such images, making iconography an immediate and resonant companion to faith. These are faces that hold a child's gaze long before he can read, before he can even speak.

In this context, preserving those images and passing them on correctly is essential. The mission is comparable to that of St. Irenaeus, who wrote his massive Against the Heresies in the wake of a hideous parade of martyrdoms at Lyons. One might wonder why he'd focus on theological details at a time of mortal crisis, but, as David Mills says in The Saints' Guide to Knowing the Real Jesus, if you're going to be tried and executed for your faith, it's important that the Jesus you're following be the real thing.

But what does it mean to pass on an image "correctly"? A major theme of the book is the lively and complex relationship between the "canon," the standard forms used in icons from time immemorial (that the Virgin holds her child in a certain way, that St. Paul is balding while St. Andrew's hair is gray and tangled), and the force of living faith within a particular iconographer. Yazykova keeps returning to the paradox that a slavish adherence to the canon can be lifeless, while too much personal intrusion turns an icon into a mere religious painting. Iconography is a spiritual discipline, and, like all spiritual disciplines, one in which "[Christ] must increase, but I must decrease" (John 3:30). For this reason, icons are traditionally not signed, and the names of artists responsible for most icons throughout history have been lost.

Yazykova writes, "Precisely because icons are sacred images, the artist's task is to bring the viewer into a relationship with that true likeness that is nothing less than the likeness of Jesus. Hence the importance of avoiding anything that distracts us from that relationship—external prettiness, virtuosity of technique, or decorative elegance."

This means that the iconographer must find a balance between faithfulness to the tradition and his own unique gifts for interpreting that tradition; he must bring the subject of the icon vividly to life, without drawing attention to his artistic technique. The only way to do this is to pray. Good iconography is the fruit of spiritual maturity.

Yazykova's strong suit is her ability to analyze iconography, identifying the artist's strengths and weaknesses. But, even with a generous 16 pages of color illustrations, it is difficult for the novice to be sure just what her comments mean. One iconographer has a "warm, brightly decorative style … [which] coexists with a certain aloofness"; another's work is "deeply contemplative and yet … charged with electrifying energy"; while the "somewhat over-emphasized didacticism" in the work of a third "is compensated for by its sincerity and openness." I confess I didn't always know what she was talking about. I felt, as I finished the book, that I'd read more of this sort of evaluation of various iconographers' style than of the history and characters of the era.

The paradox that iconography must be both original and faithful to tradition remains an intriguing theme throughout, however. A new wrinkle was introduced after the fall of communism, when the church was at last ree to recognize and proclaim the saints of the 20th century. The problem is that, for most of these figures, photographs exist. Why would that be a problem? Yazykova explains using the example of St. Tikhon of Moscow (1865-1925), a saint particularly interesting to North Americans since he spent many years on this continent as bishop of Alaska, and during that time received American citizenship. St. Tikhon was a forceful critic of the persecution of Christians under communism, and was for a time imprisoned for his witness. Many photos of St. Tikhon exist, recording a countenance that is both tender and tragic.

The existence of photographs complicates the iconographer's task. Yazykova writes that some of the depictions of St. Tikhon are

not quite iconographic—but more like portraits. The viewer has no feeling of an encounter with the saint's essence as it exists in the kingdom of heaven and finds no evidence of the miracle of transformation. In other cases, we notice a different extreme: in an effort to create generalization of the image the artist falls into abstractionism. The saint's well-known face is distorted to the point that it is no longer even recognizable. The holy countenance has been transformed into a mask. The viewer fails to feel an inner connection with such an icon, and it fails as an aid to prayer because no connection is made with the true prototype. Somehow the iconographer must find his or her way through these contradictory temptations in order to create an authentic new icon.

That passage is not only a good presentation of a new dilemma facing iconographers, but also gives us a sense of how icons are meant to function in the life of prayer. An icon is meant to be a "window into heaven," showing us not characters as they were on earth, but as they are now, transformed by God's glory. Every icon is an icon of Christ. If it depicts a human saint, it is showing the person as she is with Christ shining fully through her. It is our goal and destiny as well to become bearers of this glory, and be likewise transformed. It has been said that God was the first iconographer, since we are living images of him: "Then God said, 'Let us make man in our eikon" (Gen. 1:26). If an icon does not assist us in recovery of that union with God, it is not a true icon at all. As Yazykova writes, "In the final analysis, icons serve a purpose only to the extent that they assist us in becoming icons of God."

Frederica Mathewes-Green is the author of The Open Door: Entering the Sanctuary of Icons and Prayer (Paraclete).