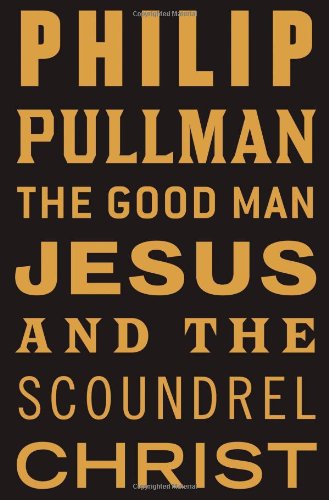 The Good Man Philip and the Scoundrel Pullman.

A parable for our times.

The following is a story that attempts to show how a recent novel could have happened. It is not the story. It is not even a plausible story. Sometimes it reads like fairy tale and at other times like a product of Google Translate. The effect is intentional.

Once there were two brothers from Norwich. The younger brother, Philip, became a storyteller. He had a gift for describing the natural world without sentimentalizing it. The older brother, Pullman, became a teacher and a champion of human liberty. He liked stories, too, but thought they ought to serve a Greater Purpose.

"Think of the good your novels could do, the freedom they could bring to so many," he told Philip. "Everywhere you look these days, you see people cowed by authority. They're so sure that priests and popes have the key to some secret mythical knowledge that they give up thinking for themselves."

"Not all religious people are bad," said Philip, who had fond memories of their grandfather, a Church of England priest. Like Pullman, Philip was an atheist, but he understood the appeal of faith. He often found himself humming tunes from Hymns Ancient and Modern. And in fact he considered it unkind to kick other people's crutches out from under them. "What gives you the right to correct everybody, Pullman? You should get the knot out of your own shorts before you go yanking threads from other people's. Anyway, the churches are all empty now, so why do you care?"

Pullman wondered how Philip could be so dense. Of course, the Church of England was a crumbling ruin. But religion seemed to spring up everywhere it wasn't planted. There were American-style mega-churches in the heart of London; Nigerian immigrants worshiping in tongues; politicians who manipulated the public with religious language; violent clashes between fundamentalist sects. Not to mention a revival of those damned Narnia books. Of all writers, C. S. Lewis pushed Pullman furthest into pure loathing. "If only I could write," he thought, "I'd be the anti-Lewis."

Philip was a working on a coming-of-age story at that time about a girl and a boy who travel between parallel worlds. One charming invention of the stories was the relation of the human characters to their animal spirits, or "daemons." The connection was as close as soul and body in Christian cosmology, but in Philip's cosmos, the animal spirits seemed to be a metaphor for sexuality, among other things (he wouldn't tell anybody what his own daemon was, but he decorated his home with pictures of boa constrictors). Pullman approved of all this, and he convinced Philip to add some of his own pet themes and present the story as a retelling of Paradise Lost—a version in which Satan (a morally ambiguous scientist) tosses aside a few innocents and then triumphs on behalf of human freedom. Pullman's additions were disjointed and disturbing, but Philip described the children and animals (particularly a polar bear) so well that almost nobody noticed. The books became bestsellers and the first of the trilogy was even turned into a movie.

It was during the public relations phase of The Golden Compass film that Pullman first met the stranger. It never occurred to him to ask the stranger's name directly. Sometimes the stranger looked like Christopher Hitchens—usually when he hadn't shaved in a few days. Sometimes he looked like the Archbishop of Canterbury, and then he would flatter Pullman, saying things like, "You've so much wisdom. It's you who should teach us."

One day, the stranger came to him wearing a white coat and goggles. He said, "You know, Pullman, it's Jesus you should write about. Your brother wrote about Satan and the death of God, but the power of Christianity Inc. is built on the church's lie that a man was God. You and I both know that if today's church people met the actual man Jesus, they'd condemn him as a heretic. In fact, Jesus was an anti-establishment sort of man in his time—much like you, in yours. He was betrayed by the religious powers of his own day, and the church co-opted him into something he would have despised, the figurehead of an abusive institution." The stranger smiled. "You would be doing history a favor, Pullman, by 'resurrecting' the real Jesus Christ."

"Funny you should bring up the Resurrection," Pullman said. "If I were to write about Jesus Christ, what would I say about that? I mean, hasn't it all been said before? But nobody listens."

The stranger smiled. "You could tell the story as the tale of two brothers. One would be Jesus, the other Christ. Give Jesus all the best punchlines, obviously. Make Christ a neurotic con-man for God. Once the real Jesus dies, people in your story would see 'Christ' walking around and then wishful thinking would kick in and they would start to believe in a resurrection. Have you seen The Prestige, by the way?"

"What would I do about Mary? Wouldn't she know one son from the other?"

"Ah, yes. I'd leave her out of the later chapters. Fortunately, the Bible takes the same tack."

Pullman wrote the story that the stranger suggested and even found that he enjoyed the project and drew inspiration from the character of Jesus. His crowning achievement, he felt, was the famous prayer in the Garden of Gethsemane. Instead of submitting himself to his father's will, Pullman's Jesus indicted God for his silence and declared himself an atheist. After the publication of The Good Man Jesus and the Scoundrel Christ, Pullman told an American reporter that his Jesus reminded him of himself (he said this without irony, but later wondered if he hadn't tipped his hand). A few weeks passed, and then, excited about all the rave reviews he'd collected so far, he rang up Philip to share his joy.

"There's no Philip here," said a raw voice on the other end of the phone.

"That's ludicrous—I've been using this number for years."

"There's no Philip here and never has been, so don't bother us again."

He was stunned. But when Pullman told the stranger about it (he'd come for a visit, showing off his iPad), the man smiled mysteriously. "Be happy, Pullman. Now you get credit for everything."

"What are you saying?"

"We read back over the galleys of your life and decided that your brother was superfluous to the plot. So we merged the two characters and—well, it's much better this way. Cleaner. You'll be happy about it when you have some distance."

Pullman recoiled. "Who in hell are you? What gives you the power or the right to change history—to change biography?"

At which words, the stranger grinned and said, "Enjoy your success—I'm hoping to write a book of my own one day. Can I count on you for a jacket blurb?" When Pullman swore at him, he vanished into a Starbucks and never reappeared.

Pullman, who now added the name "Philip" to his own, lived the rest of his life in moderate happiness. For a while, he missed having a brother to talk to. The feeling faded in time, though, as most feelings do. Eventually, he was content simply to chat with himself.