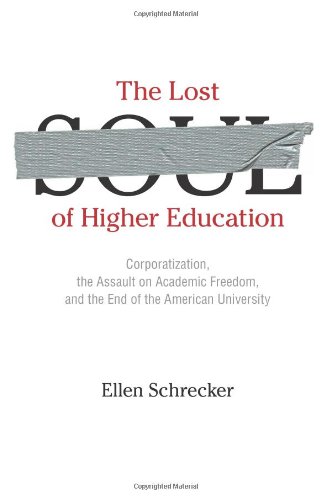 The Lost Soul of Higher Education: Corporatization, the Assault on Academic Freedom, and the End of the American University
Ellen Schrecker
The New Press, 2010
304 pp., 28.5 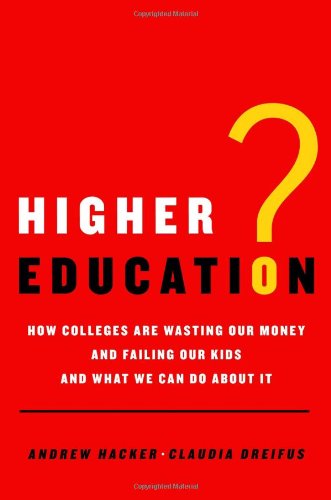 Higher Education?: How Colleges Are Wasting Our Money and Failing Our Kids---and What We Can Do About It
Claudia Dreifus; Andrew Hacker
Times Books, 2010
288 pp., 26.00

We Visit the Zoo

Reports on and from academe.
November/December 2010

At the end of her treatise The Lost Soul of Higher Education, Ellen Schrecker, professor of history at Yeshiva University, writes that "without an aware and energized academic community that can fight for all its members, higher education as a bastion of freedom and opportunity will, like the polar bears' glacial habitat, slowly melt away." Colleges and universities are not melting away, as any casual observer will recognize. In fact, they seem to be proliferating, expanding, and upgrading despite the economic downturn. But Schrecker's concern is not really with the institutions as a whole. Rather it is with the place of the faculty in them.

Having recently visited the zoo, I must say it is tempting to run with Schrecker's analogy of college faculty as polar bears—occasionally ferocious, but mostly just lazing around in their own world, scratching themselves, yawning, oblivious to the stares of onlookers. As she tells it, though, university faculty are hardworking—sometimes 55 hours a week!—and so solicitous of those outside of the academy that they have tied the university in knots trying to gain public approval.

At one point, Schrecker explains, that meant caving to the demands of Joseph McCarthy, but today, she says, university faculty are submitting to the will of corporations, the military industrial complex, right-wing foundations and Republican legislators, to name just a few. The courts, she says, are not helping either. With recent decisions like Garcetti vs. Ceballos, the American legal system has significantly scaled back the definition of "academic freedom" and limited the extent to which university faculty can claim that mantle as a justification for their actions.

Though Schrecker says that there was no "golden age" of higher education in America, she still suggests it's gone precipitously downhill. Of the firings of professors in the 1950s, she writes, "in none of the academic freedom cases of the McCarthy era was anybody's teaching or research at issue. It was the off campus political activities" that got professors in trouble back then. Today, Schrecker worries that not even teaching and research receive much protection.

The 1960s, of course, blurred the line significantly between politics and classroom life. Schrecker cites historian David Hollinger, a Berkeley graduate student at the time: "Life outside of the classes seemed to have become an all-day, half-the-night seminar involving everyone I knew discussing the meaning of the university and the life of the mind in relation to the rest of the world." And many faculty and students began to see the classroom as politics by other means. Proponents of black studies "viewed these programs," according to Schrecker, "as contributions to the ongoing struggle for racial justice, not as conventional academic courses of study." One early supporter of women's studies wrote: "What administrators didn't realize, of course, was that it was almost impossible to take a women's studies class, as scholarly as it might be, without developing a feminist consciousness." So when what Schrecker calls a "backlash" developed on the Right in the late '70s and '80s, it was perhaps a little unreasonable to assume that critics of the university should simply have ignored professors' classroom and research activities and focused their energies on faculty political affiliations as they had done in the '50s.

But before we go too far down that road, perhaps it's important to note that the Right's critique of the university is and was hardly as monolithic as Schrecker suggests. Lumping Allan Bloom and Donald Kagan's anger at the Cornell administration's capitulation to the armed radicals who took over the student union together with George Wallace's rant about "workin' folk fed up with … pointy-headed intellectuals" demonstrates a certain lack of nuance in her argument. It's hard to imagine Bloom objecting to the "elitism" of university faculty.

In Schrecker's telling, all of these complaints contributed to a "demonized portrayal of American universities and their faculties that become entrenched in the popular mind." She admits it sounds "conspiratorial," but she calls this "the result of a highly self-conscious and well financed campaign to destroy the influence of the academic left." From Bloom to Wallace, Richard Nixon, Spiro Agnew, Ronald Reagan, and George W. Bush, Schrecker argues, "the attack on the academy was part of a broader campaign that sought to roll back the social, political and cultural changes of that more liberal era." Rather than take seriously the intellectual critique of scholars on the Right, she dismisses it as so much racism, sexism, homophobia, etc. Conservative foundations like Olin and Bradley (both of which have given this author money), and academic organizations like the National Association of Scholars and the American Council of Trustees and Alumni, are not really interested in bringing back Western Civ to the classroom as they claim, Schrecker explains, but rather in ensuring that civil rights are rolled back and women returned to their proper place in the kitchen. She even blames the support by right-wing foundations for banning the use of quotas in university admissions for helping to "legitimize the exhibitions of more blatantly racist behavior … [as when a] fraternity at the University of Wisconsin held a slave auction." If there were an award for the intellectual long jump, Schrecker has certainly earned it.

Ultimately, though, Schrecker is a member of the academic Left, who feels that Allan Bloom and his ilk have discredited her. She writes of Bloom: "It took many years, and contact with a libertory gay and lesbian movement, to get over my fury at the homosocial exclusivity of a certain kind of precious and erudite male bonding. Bloom's racism is as blatant as his misogyny."

Perhaps that sentence—with all of its not atypical academic jargon and self-important anger—is as good a place as any to segue into another new book, Higher Education? Historian Andrew Hacker and New York Times reporter Claudia Dreifus see some of the same failures in higher education that Schrecker mentions along the way—the proliferation of adjunct faculty, the high cost of a college degree, the proliferation of vocational education, the premium placed at universities on publishing. But whereas Schrecker feels that these are ultimately a problem for the "habitat" that she and her colleagues inhabit, Hacker and Dreifus are more interested in the students they are supposed to serve. The subtitle of their book—"How Colleges Are Wasting Our Money and Failing Our Kids—And What We Can Do About It"—tells you who this book is written for. (Their prose is much more readable as well.)

Both books would claim that colleges and universities serve a purpose besides themselves in society. Hacker and Dreifus dismiss the idea that higher education makes better citizens. Rather they write that "colleges should be making their undergraduates more interesting people. Higher education is an ongoing conversation, created for students poised at adulthood, which can and will continue through their lives." To the extent that Schrecker sees higher education as for undergraduates at all, it is as a "social safety valve" helping the disadvantaged move up the economic ladder. But she quickly returns to the professors: "They raise questions with which an informed citizenry must deal. They are, therefore, essential to the preservation of reasoned debate and unfettered expression that our democratic system requires."

Hacker and Dreifus, on the other hand, are much more worried about whether the teachers are actually teaching the students in their classes. "The greatest single scandal in American higher education," they write, "is what happens—and doesn't happen—in the first semester. Though no one has collated full figures, we estimate that over a quarter, more likely at least a third of all freshmen fail to return."

On the lower rungs, they cite nonreturn rates at three of Missouri's state campuses as 35 percent, 36 percent, and 44 percent. At the higher end, they write that the "mediocrity of Harvard undergraduate teaching is an open secret of the Ivy League." For these travesties, they blame a faculty that is overly occupied with research and universities that are overly occupied with the prestige (and money) that come from that research. Overall, they find senior faculty to be overpaid and underworked.

Dreifus and Hacker also worry about the other functions of the "multiversity," from large athletic programs to lavish dormitory facilities. "Every noneducational appendage should be made to defend its existence from the ground up and without the benefit of any doubt. We would apply this stricture to art museums, career counseling and chaplain's offices. We'd ask the same of swimming pools, tennis teams, and golf matches against other colleges. If it's more than minimal facilities, are they really necessary?"

This narrowing down of the mission of colleges and universities is important work. And it leads the authors to some interesting conclusions. Including that tenure should be abolished. While Schrecker concludes that the institution of tenure is vital to the ability of professors to perform their roles in society, Hacker and Dreifus suggest that it puts some bad incentives in the system—and when it comes time to protect academic freedom, "tenure is a feeble shield."

For all of their sensible recommendations, Hacker and Dreifus still pull their punches. For instance, they have a table illustrating the overspecialization of many undergraduate classes—from "Language, Disability, Fiction," to "Transgression and Redemption" to "Realisms and Anti-Realisms" to "Gay Autobiography." But what these topics have in common is not simply their professors' narrow interests but the obsession with politics and the constant need of the academy to "critique" every part of the traditional curriculum (before students are even familiar with the material being critiqued). Hacker and Dreifus have written a screed against higher education that quotes Harvey Mansfield admiringly and also suggests that the University of Colorado has McCarthyite tendencies for firing Ward Churchill. No mean bipartisan feat.

In fact, both Higher Education? and The Lost Soul of Higher Education contain lengthy discussions of the infamous Churchill. Schrecker predictably gets on her high horse, citing one professor who says the ethnic studies professor had a publication record "most faculty would die for." Hacker and Dreifus, meanwhile, suggest that Colorado pretty much got what it deserved for hiring Churchill: "his politics were helpful in getting him fast-tracked for tenure in the first place, after only a year on the full-time faculty."

And Churchill's plagiarism and shoddy scholarship made Hacker and Dreifus wonder about something else. While there is a standing committee to investigate research by the 993-member faculty at the University of Colorado, "only 5 cases had been referred to it" between 1989 and 2005. In four, no action was taken; in the fifth, the professor was found guilty of research misconduct but not dismissed. The polar bears aren't on thin ice just yet.