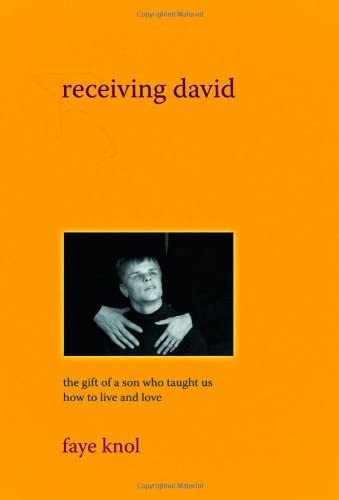 When David Knol was born fourteen weeks premature in December 1982, he was wrapped in a blanket and handed to his parents. In accordance with hospital policy at that time, no further efforts were made. Hours later, however, as David continued to fight for breath, a doctor was asked to reassess his condition. Within moments he was transferred to the Neonatal Intensive Care Unit, where he would spend the next five months.

David's birth experience left him with multiple disabilities, including cognitive delays, stunted growth, and blindness. For his twenty-two years on earth, his mother, father, sister, and brother served as his primary caregivers, but as Faye Knol clearly communicates throughout Receiving David (published by Eerdmans in September), this memoir is far more about what David gave to his family and friends than about what they gave to him.

When Faye and her husband Harry brought David home from the hospital, Harry, a special education teacher, made it clear that David was going to be "treated as a part of the family, not the center of it." So, too, does Knol write about David's disabilities not as the defining element of his personhood, but merely a factor.

When the family began attending a new church, Knol recalls, they were hesitant about sharing the responsibility of David's care with their larger church family, even though the education director had asked what services the church could provide for David. What he needed was a helper to accompany him to weekly Christian fellowship meetings for developmentally disabled adults. When Knol did bring herself to ask the church for assistance, it was readily provided, and the weekly meeting became a place where David could flourish in his faith.

Knol movingly walks her readers through the difficult decisions surrounding David's diagnosis of kidney failure, his end-of-life care, and her grieving process following her son's death. The family's decision not to pursue dialysis or a kidney transplant is relayed in a straightforward ...