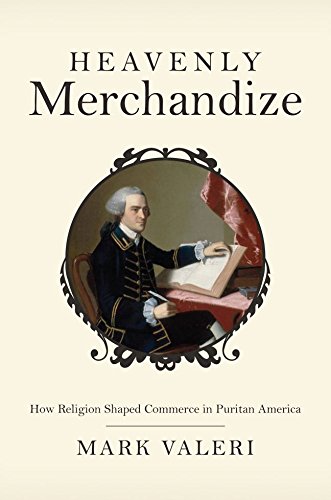 "The Most Satisfying Trade"

Religion and commerce in Puritan America.

In 1686, Boston minister Samuel Willard preached on Proverbs 23:23, "Buy the truth, and sell it not." In his sermons, Willard invited auditors to conceptualize Christian faithfulness in terms of "Metaphor[s] … borrowed from Traffick or Merchandize: a thing that is well known to, and more or less practiced by, all sorts of men." Indeed, Willard cast the entire life of faith as an extended marketplace escapade. Truth was a "Commodity." Willard's congregants themselves could be "Buyers," who "trade in … [the] Merchandize" of Truth. To acquire that precious commodity, you must hie to the "Truths Market, with a real purpose to buy." (Caveat emptor: in the Truths Market, customers should guard against those hucksters pedaling "false wares.") When you have identified the true goods, "Ask the price, and boggle not at it, but resolve to give it," confident in the knowledge that "God, who alone hath the Truth to sell, and can only make a sure conveyance of it to us, hath set a stated market-price upon it …. Hence it is a vain thing for you to think ever to beat down the Market. God … hath positively set the price, and he will never go from it." Finally, you make the purchase, acquiring "interest and propriety in the thing which is bought." Soteriology and spirituality were, it turns out, "the most Satisfying Trade." The sermons were published (and, of course, bought and sold) later that year under the startling title Heavenly Merchandize.

In an elegant study of the same name, historian Mark Valeri explains how it came to be that a Reformed preacher in Puritan New England could stand up before his people and limn salvation in market imagery. Valeri tells a story of profound change: at the beginning of the Puritan experiment in New England, clergymen were decided critics of market practices, and they worried that merchants, possessed by self-interest, were likely to exploit their neighbors. Yet by the third decade of the 18th century, New England's ministers, and indeed the whole culture, comfortably spoke the idiom of the market; it was widely believed that God had written the laws of commerce, and merchants, generating profits that served the common good, were God's faithful servants.

Valeri's argument, in its simplest terms, is that changes in religious culture and changes in theology made possible New England clergymen's embrace of market practices. In other words, in Heavenly Merchandize, we are not in the hands of Weber—what Valeri offers is not a "Calvinism" whose essential self-discipline and industriousness ironically predestined its own "capitalist" undoing. Nor is Valeri arguing for secularization. Contra those scholars who see New Englanders' embrace of market practice as perforce a move away from religiosity, Valeri demonstrates that New England's clergymen and lay people, increasingly comfortable with market practices, were nonetheless deeply Christian. Their Christianity, however, changed over the century, and those changes—changes in theological idiom, in epistemology, in ecclesiology—made possible their accommodations (a term Valeri rightly uses, though sparingly) to market culture. In Valeri's persuasive reading, religious language was not merely a sop that eased the embrace of triumphant market norms. Rather, ministers and devout merchants were "thoroughly religious," even as they stitched together their beliefs and their pious Christian practices with newfound enthusiasm about commerce.

It is worth pausing to emphasize how dramatic a transformation this was. The early 18th-century embrace of the marketplace contradicted not only Puritan precedent; it stood in marked contrast to centuries of censoriousness about exchange and trade. Aristotle, for one, held that the "Life of merchants is … ignoble and inimical to virtue," hence merchants could not be citizens of the ideal state. The church, too, had long inveighed against trade. Augustine glossed Psalm 71:15-16 to mean that traders did not "go in the strength of the Lord," and medieval compilations of canon law included the dictum that merchants are "rarely or never able to please God." Trade, exchange, and shameful gain (buying low and selling high)—all were denounced by thinkers in antiquity and the Middle Ages. In light of this ubiquitous critique of market practices, it is all the more striking that by the 18th century, New England's clergy was hymning praise to Boston's merchants.

The change from denunciation to accommodation to unambivalent embrace of market practices was gradual. "Protestant religiosity and economic modernization," writes Valeri, "moved toward congruence slowly, generation by generation." In Boston's first generation, Puritans—lay and ordained—assumed that the church would set the boundaries in which commercial transactions occurred. Indeed, between 1630 and 1654, Boston's First Church excommunicated eight people for economic sins such as overpricing goods. From the pulpit, ministers took aim at mercantile assumptions and tricks of the trade. Merchants, said ministers, should distribute excess capital to the blamelessly needy, rather than reinvest it. Unsurprisingly, clergymen disapproved of usury and of ostentatious display of wealth. They also blasted price-gouging, for the Bible made clear that merchants should set their prices according not to what the market would bear, but according to custom and the goods' inherent value. This criticism of (to use the apt early modern term) "oppression" reveals at least two assumptions: Scripture disclosed timeless principles, including principles that governed trade; and the church had authority over merchants' economic activities.