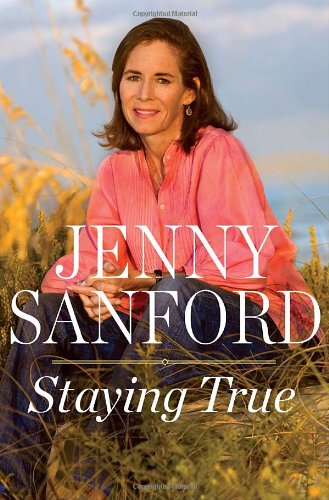 The Story of a Marriage

When a marriage ends, it is hard not to wonder who changed. Was it the husband? The wife? Both? Reading Jenny Sanford's account of her marriage to, and separation from, South Carolina Governor Mark Sanford, it is clear that she thinks he changed. The rambling June 2009 press conference he gave—admitting that he was not "hiking the Appalachian trail" (as his staff originally claimed), but meeting his Argentinian lover—was not what she had expected from the man she married two decades earlier.

While no one knows what really happens inside a marriage, it is safe to say that Mark Sanford did not behave well. The title of his wife's book, Staying True, refers to her. She stayed true to herself, her marriage, her family, and her ideals. He did not. But when a marriage ends, it is also hard not to wonder whether there were early signs that it would not turn out well. And every one of the mostly female readers of Staying True will have a moment when she thinks, That's when I would have dropped him like a hot potato. For me the moment came on page 25, when I learned that during their engagement, Mr. Sanford asked Mrs. Sanford to meet him at a restaurant for dinner "and bring a list of … lifetime goals for us to discuss." He came with several pages of notes, with priorities including making a lot of money, bicycling across America, beating his brother at tennis, and becoming a senator.

What? He didn't want to be a fireman too?

The other list Mr. Sanford brought with him that evening was one of "spiritual goals," referencing specific Bible verses that he aspired to live by. According to Mrs. Sanford, they included Galatians 5:22-23: "The fruit of the Spirit is love, joy, peace, patience, kindness, goodness, faithfulness, gentleness and self-control." And Matthew 5:16: "Let your light so shine before men, that they may see your good works and praise your Father in heaven." And Proverbs 16:18: "Pride goeth …." (Well, maybe not.)

Mrs. Sanford herself never had to memorize any Bible verses as a child growing up in the Catholic Church, and she was duly impressed with her future husband's knowledge. Despite his strange, and now well-publicized, request that he not be required to pledge faithfulness to her in their wedding vows (another aha moment), Jenny Sanford took the plunge.

To hear her tell it now, the marriage required a lot of sacrifice on her part. "I suppose you could say that women are built for sacrifice," she writes early in the book. But there's sacrifice and then there's sacrifice. Mark Sanford hounded his wife about every penny she spent. Yes, many other men do the same, but Mr. Sanford's skinflint ways put him in a class of his own. When they were first married, he bought her a $25 bicycle: half of it was a birthday present and half was for Christmas. Years later, he bought her a diamond necklace, but later decided it was too expensive and returned it. (Are the bells going off yet, Jenny?) Mr. Sanford seems like an insensitive lout in other instances as well. He refused to attend Jenny's grandfather's funeral. And while she concluded it had something to do with their different understandings of funeral services, one can't help but suspect he was too cheap to cover the plane ticket.

Jenny Sanford has become something of a cultural icon in the months since her husband's breakdown. On the fast track at the investment bank Lazard in New York, she gave up her career to follow Mr. Sanford to his home in South Carolina. She had four sons, and ran most of her husband's political campaigns. But when the moment of truth came, she did not turn into a shrinking violet. Neither Silda Spitzer nor Hilary Clinton, Jenny refused to stand by her man while he humiliated himself and his family.

Mrs. Sanford's balancing act between career and family was not something she planned. She seemed to want to stay at home and raise a big family. But in the hospital after the birth of their first child, Mr. Sanford announced his candidacy for Congress, telling his wife that she must be his campaign manager. "You can do this with the babies at home," he explained, "and we can just put a phone line in the kitchen. The only way this will even possibly work is if we keep our expenses incredibly low and that's why I really need you. You are free."

Amazingly, this sweet talk worked. And Jenny Sanford, who (by her own account) wanted nothing more throughout their marriage than to be with her friends and family, to devote herself to raising her sons, couldn't seem to catch her breath. So determined was she to help her husband fulfill his political ambitions, to calm the "restlessness" he was always displaying, that she kept saying yes. When Mr. Sanford won his first election, she told the local paper that she wanted to spend a night at home alone with her family. "After that, she wants to see her friends, read something beside political treatises, and play some tennis or golf."

When did she think the unrelenting demands were going to end?

However blind Mrs. Sanford may have been to Mr. Sanford's faults, she was immediately attuned to the differences in their religious practices. She was a Catholic from a large family in the Midwest. "Faith in our family wasn't just something you had, it was something you did. I saw my dad pray nightly on his knees before his cross. Though he rarely preached to us, when I saw my father, such a huge figure to me, praying in this humble position, I felt the serenity of knowing that someone was always watching from above."

She recalls going to Mass every Sunday as a child; her parents would go almost every day. Interestingly, she never describes going to church with her husband or children. There is no evidence, in this book anyway, of a pastor or a priest, of a church community, of any kind of group worship.

Instead there is Mark Sanford, quoting Bible verses and even writing what he called the "Sanford Family Constitution." While Mrs. Sanford found herself "nodding in agreement" as he read it to the family over dinner one night, an outsider might have found the existence of such a document a bit odd. The family's "mission," he announced, "is to be a nurturing, loving and fun safe harbor and home place—where each member is loved unconditionally for who they are, where values are instilled and where each person is encouraged to develop their talents, find their passion and pursue it with excellence to indeed glorify God and make the world a better place." (Christian College presidents may want to see if Mr. Sanford has cribbed from their websites.)

It was shortly after the mission statement dinner that Jenny discovered her husband's lustful emails to his mistress. Confronted with the evidence, his reaction was nonchalant to say the least. And he later admitted to her that there were other dalliances over the years as well.

By the end of Staying True, Mark Sanford is begging his wife to allow him to see his mistress again because he wants to "find the key to his heart." It is hard not to imagine him as the leader of a religious cult of his own making, spouting sermons to everyone, all the while living by his own rules. And finally Jenny has her aha moment. "He seemed to be traveling a path of his own making, seeking his own comfort, no longer guided by a power above. I began to see him as lost, disconnected from his basic values."

Despite what readers might see as early warning signs of Mark Sanford's failings, Staying True is not the story of a naïve woman suddenly finding out the truth. Whatever her husband was up to, she seemed to have her eye on the ball. How could she be there for her kids? How could she ensure they would be raised well? How could she keep her own faith? How could she plan for their life after politics?

There is surprisingly little second-guessing or handwringing in the book. Mrs. Sanford seems confident (despite the way the rug was pulled from under her) that her fate is in God's hands. She is like many women of strong faith I have interviewed, better able to navigate the push and pull of modern motherhood and womanhood because of their trust in God's will. The key to her heart was never lost.

Naomi Schaefer Riley is an affilate scholar at the Institute for American values. She is working on a book about interfaith marriage.