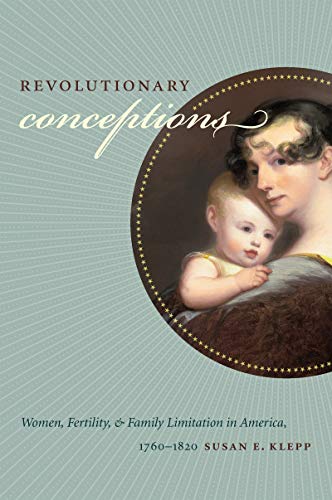 Contrary to what we all learned in tenth-grade health class, making babies is complicated. At least, making babies on a national scale is complicated. To grow its population, a country needs nearly equal numbers of men and women, and they must possess the legal and economic freedom to marry. They should marry young to maximize the childbearing years. The men and women need to be near each other a lot, meaning husbands cannot be absent for months at a time for work or war. Additionally, women must be healthy enough to carry pregnancies to term, and then they and their children need adequate nutrition to survive. A cultural mandate to "be fruitful and multiply" helps, too.

By the second half of the 18th century, the United States had assembled all the ingredients for a sustained baby boom. Yet on the eve of the Revolution, American birthrates began a long decline, about a century before the rates of other Western nations and two centuries before the rates of developing nations. Historian Susan E. Klepp wondered why.

After copious research, she concluded, in Revolutionary Conceptions: Women, Fertility & Family Limitation in America, 1760-1820, that the "founding generation of American women (and some men) … rejected the abundant and redundant fertility of the colonial, patriarchal family and replaced it with a sensible, sentimental, and carefully planned family of beloved daughters and sons that freed women to pursue other interests." As a result, whereas the average colonial woman might bear eight or more children, that number stood at seven in 1800, five in 1850, and just three and a half in 1900. Along the way, both womanhood and motherhood were redefined.

In her first chapter, Klepp documents this trend with reference to numerous demographic studies, mostly of New England and the Middle Colonies. She compares these numbers with data from England, which saw a slight rise in birthrates in the late 18th century, and from France, the only other country that saw a dramatic birthrate decline in the same period. The figures are suggestive rather than conclusive. No census or set of parish registers proves Klepp's statistical argument. Some of the data, such as a bar graph of age and sex distributions of enslaved persons in eastern Pennsylvania (page 37), seem only marginally related to her argument. Furthermore, Klepp cites both demographers and historical witnesses who judged America to be teeming with wee ones in the years after the revolution. The overall impression of the book's many charts, graphs, and citations, though, is one of a country in which each generation of women, urban and rural, black and white, immigrant and native-born, bore about one fewer baby than their mothers had.[1]

Klepp devotes the rest of the book to parsing how and why American women regulated childbirth. Such regulation was not easy, for, as complicated as it was to make babies in statistically significant numbers, it was just as complicated for married women in the early Republic to stop making them. Condoms were known then, but they were associated with European prostitutes and scarcely available in the United States. No other barrier methods of contraception existed. A variety of organic medicinals were thought to prevent conception, cause abortion, or regulate menstruation, but these were unreliable and could cause distressing side effects. Klepp describes all of these options in exhaustive detail, but the descriptions do little to answer her central question: how did women take control of their childbearing bodies?

The real keys to family limitation, Klepp suggests, concerned starting, spacing, and stopping. Women who wanted smaller families started having children later by marrying later than their colonial foremothers. Women spaced their children by nursing their babies longer and, in some cases, by sending their husbands away for a while. (Incidentally, taking a hiatus from home was one of the only ways men participated in family limitation.)

Lastly, increasing numbers of early Republican women stopped having babies before the end of their fertile years. Rationales for stoppage abounded: childrearing was exhausting work, feeding multiple mouths could get expensive, and, as America began to distinguish its homespun self from decadent Europe, large families were seen as an extravagance. In visual reinforcement of the latter development, portraits of women shifted from fruity exuberance (a mother seated outdoors with a cornucopia on her lap, for example) to domestic tranquility (a mother reading or sewing by the hearth). It remained a woman's nature to bring forth a baby every couple of years, but she endeavored to control that nature that she might better nurture a smaller brood.

In short, the how and why of family limitation were entwined. Working from sketchy biological knowledge, women developed somewhat successful practices for limiting fertility, and they shared these with neighbors and kin. At the same time, women shared even more revolutionary ideas drawn from the rhetoric of independence. Perhaps American women could achieve self-determination as the colonies had. Perhaps Enlightenment interest in science could be expressed in family quantification and rational domesticity. Perhaps elevation of the body politic could foster a new understanding of female bodies as vessels of consciousness and volition instead of just babies.

Connections between revolutionary rhetoric and feminist ideals are certainly plausible to 21st century readers, but Klepp falters in her attempts to locate these connections in the historical record. The problem was not a lack of investigative effort. Klepp examined diaries, letters, paintings, poetry, engravings, medical records, Poor Richard's Almanack, and A Vindication of the Rights of Woman, plus countless secondary sources. Like the demographic data at the beginning of the boo k, though, this evidence—while it does not undermine Klepp's argument—is not always relevant. Cure rates of venereal disease at the Philadelphia dispensary in the 1780s, while possibly interesting to a medical historian, shed little light on changing ideals of femininity and family life in the early Republic.

Klepp's original research contributions deal largely with matters of vocabulary and usage, but this evidence, too, is ambiguous. She makes much, for example, of different words used to describe a new baby, including "little stranger," "little urchin" (meaning Cupid), "beloved object," "pledge of happy union," and, in a curious reference from Elizabeth Bayley Seton, "the Shadow." These terms are supposed to demonstrate increasing sentimentality toward children, but none of them would make very good Hallmark cards.

Klepp also posits that these terms signaled a shift in emphasis from pregnancy to motherhood, for as the number of allusive descriptors for infants rose, the number—and earthiness—of descriptors for previously "prolific," "lusty," and "big-bellied" pregnant bodies declined. But all of this vocabulary appears jumbled in paragraphs matched by equally long footnotes, so it is difficult either to evaluate its usage or use it to reconstruct a decisive change over time. Klepp does not, in these passages, correct for possible variances by source type, maternal social standing, or geography, among other potentially muddling factors.

Revolutionary Conceptions does not press an argument for family limitation. Instead, it simply assumes feminist ideals, among them the decoupling of womanhood and motherhood, as well as of sex and reproduction. Not all Americans, particularly conservatives, would be comfortable with such assumptions. Still, these ideas are striking not because they are radical but because they have become so widely accepted.

Today, even most conservative Christian couples carefully control their family size with artificial birth control. Some, like many other Americans of various religious and political persuasions, regard childbearing as a discrete, optional phase of life, desired by many women but not accepted as an inescapable destiny. In American society at large, links between sex and procreation are contingent; links between "reproductive rights" and women's rights are inviolable. The foundational assumptions Klepp attributes to a progressive minority of early Republican women hardly raise modern eyebrows. Questioning these assumptions—now that's revolutionary.

In her conclusion, Klepp asserts that the advent of family limitation marked "a sudden, sharp break with a long tradition of promoting high fertility within marriage. There could be no halfway measures." But, on the next page, she writes, "Or maybe that's wrong. The fertility transition was a slow, gradual process that began in the late eighteenth century; its assumptions about families, women, and children are still being contested and the consequences are still unfolding nearly 250 years later." Klepp ultimately steers a both-and course. Women who, in their many and varying ways, value both womanhood and motherhood will understand the impulse.

Elesha Coffman is assistant professor of history at Waynesburg University.