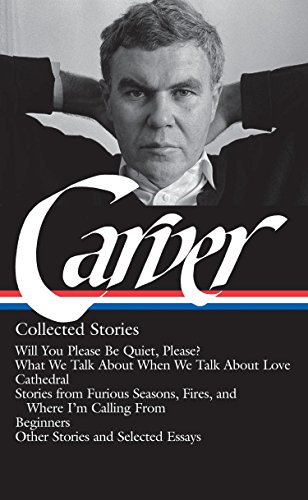 At a graduate writers' workshop I attended in Missoula, Montana, in the 1970s, our resident fiction instructor held up a copy of Raymond Carver's first book of short stories, Will You Please Be Quiet, Please?, and proclaimed, "This is going to knock you out."

And so it did. Carver's spare and powerful stories revealed in swift strokes the bruised lives, failed marriages, and assorted psychological wreckage in anonymous towns and working-class hamlets along the Pacific Coast. We were bowled over by his small, charged scenes. Innocuous incidents exposed hidden desires and muted despair, then snapped shut like nutshells. The dialogue was terse, oblique, the characters nondescript yet fully menacing. Reading Carver was like eavesdropping on trapped ghosts who don't know they're dead until they accidentally cross before a mirror. A Carver story was the record of what they saw. A friend described Carver characters as "those people in Edward Hopper paintings—together with their drinks but alone with their secrets." Critics dubbed the stories "minimalist"—short, bleak, profound stabs of realism. It was not long before the terms "minimalist" and "Carveresque" were interchangeable.

In a professional career that lasted less than two decades, Raymond Carver wrote five collections of stories and several volumes of poetry. His big break came in 1971, with the publication of his story "Neighbors" in Esquire magazine. Esquire's fiction editor, Gordon Lish, edited many of Carver's early magazine stories as well as his first book, Will You Please Be Quiet, Please?, published in 1976. Lish also edited Carver's third book, What We Talk about When We Talk About Love (1981), the book that confirmed Carver's reputation as a minimalist. It was a label Carver both regretted and resented.

At their most minimal, Carver's stories were like glancing blows, shorn of literary prose and even the exigencies of plot. Some critics thought his X-rays too bleak and unforgiving, the characters too thin, the nakedness too naked. He added heft in subsequent books. The writing filled out and filled in with more description and texture. He began to write between the lines and flesh out the characters. He wanted to make them more Chekhovian, he said. He revised, rewrote, and republished many of his earlier stories, often to restore what had been cut by Lish.

The dramatic—some would say draconian—extent of Lish's edits of What We Talk about When We Talk About Love became widely known only recently, first in a December 2007 New Yorker article and then with the British publication of the original manuscript, titled Beginners, by Carver's second wife, the poet Tess Gallagher. This publication, Gallagher said, restored the intent and depth of the stories as Carver had originally written them. Both versions—the original manuscript and the published book as edited by Lish—are reprinted in Raymond Carver: Collected Stories, issued as volume 195 in the Library of America series. It is a testament to the editors of Collected Stories, two devoted Carver scholars, that the labyrinthine history of individual story publication—and republication—is included here, along with extensive notes on the individual books and a detailed chronology of Carver's life.

Born in 1938 to a working-class family, Carver grew up in Yakima, Washington, in a house that had no indoor toilet. He married at 19, his wife Maryann already pregnant. He took the jobs he could get and so did she. They worked nights (janitor, waitress) while trying to finish their college degrees and raise two children. Their financial struggles were constant—so was their drinking. Carver wrote when he could, snatching only enough time, as he later said, to compose short stories and poems that he could draft in one sitting. The luxury of long fiction was beyond his means and finally his dreams. Of that time he wrote, "[My wife and I] thought we could bow our heads, work very hard, and do all that we had set our hearts to do. But we were mistaken."

By 1977, Carver's alcoholism had become acute. He had been hospitalized several times. In June of that year he quit drinking. After four harrowing days he emerged "shaky but sober," the editors of Collected Stories report, "and he never drank again." Divorce, sobriety, his newfound intimacy with Tess Gallagher—a strong relationship that would last the rest of his life—and his growing reputation would give Carver the security and time to take his stories in different directions. To open them up and, as he said, to explore the nuances of his characters and their fates. With the publication of his fourth collection of stories, Cathedral, in 1983, Carver was in full control of the editing of his work.

Though Carver had always cautioned himself with a mantra borrowed from the writer Geoffrey Wolff, "No tricks," he made full use of literary effects. There is symbolism and irony. There are Hitchcockian moments of conversations seen but not heard, observations through windows and across streets, encounters witnessed but left mysteriously unexplained. A Carver story tended to end in midair, yet with a finality, as if landing in purgatory. Its locomotion hinged on the telling detail, the blunt assertion, the little syncopated shock:

He had to square his shoulders every few minutes. It was like he was very tired of carrying them around.
—"Vitamins"

"You think you're God or somebody? You're not fit to lick God's boots, or anybody else's for that matter."
—"Intimacy"

[D]uring this time his wife took it into her head to go down the road with another drunk, a friend of theirs.
—"Kindling"

What happens in a Carver story takes place between men and women, in their words and behind their doors. He once said the most important influence in his life was his children, an influence he called "heavy and often baleful." But it was marriage and its vicissitudes that were Carver's great subject. No one dissected the married state, no other writer captured the sad halo of a marriage in its death throes, like Raymond Carver did. He got into its sinews, exposed its tortures, confusions, despairs. He followed it all the way to resignation and forgiveness and memory, and he recorded all its words, the lethal and the tender. When Gordon Lish extracted a line from the story "Beginners" and retitled that story and the entire third book of stories What We Talk about When We Talk About Love, it was a brilliant stroke, and it was prescient. Carver was still autopsying marriage a decade after his own had ended. One of the truths he seems to have discovered is that love fails; after that, it just endures.

Carver's life was hard and fascinating. He was unlucky, and then lucky. He all but failed, then he succeeded. By 1987, Esquire magazine had placed him at the "red-hot center" of the literary universe. He would die of lung cancer the following year, at the age of fifty.

"It would take a Tolstoy to tell it and tell it right," says one Edgar Morgan in "Put Yourself in My Shoes," a fine example of early Carver, with its contrapuntal marriages, its suppressed anger, and its little ironic click. Raising the specter of Tolstoy was a clever joke at Carver's own expense—there would be no long, sweeping novel from his pen. Yet minimal is not the same as shallow, and Carver's best stories are taut and sure no matter their length. By the time of his death, he had given them larger structures, and these too he controlled masterfully. "Intimacy," "Kindling," and "Blackbird Pie" are three of his best stories, and they show his range as well as his economy. The tension of the early work had now been finessed with a simple grace. Yet these are Carver stories. They are sly and move inevitably with great power. They have a keen compass for loss, and they zero in on this loss with precision and affection.

Do they surpass those early stories with the hard recoil that gave us small gasps, stories like "The Father," or "Collectors," or "The Idea"? I'd say no. There was nothing cheap about these, and they retain their power. Re-reading them thirty years later, I marveled at their muscle. From his first stories to his last, Ray Carver proved he didn't need a lot of words to go deep, where the pain is. He just needed the right ones, and these he found.