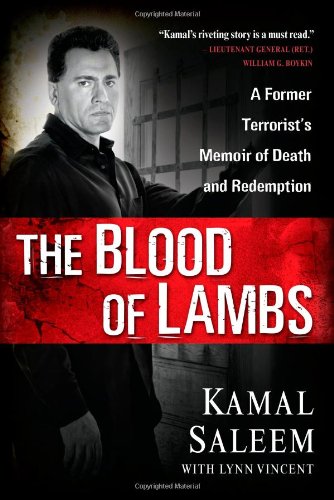 The testimony of a self-described former terrorist.
May/June 2010

On Christmas Day 2009, our youngest son, Jay, found himself on Delta Northwest Airlines Flight 253 from Amsterdam to Detroit. Toward the end of the flight, Jay's seatmate, a Nigerian Muslim about his age named Umar abd al-Muttalib, tried to blow up the plane using a bomb hidden in his underwear. Reflecting on Jay's experience, and on Umar and the failed efforts by his father to warn authorities, has helped me clarify my attitude toward American Christian anti-Islamic literary polemics, including Kamal Saleem's "memoir," The Blood of Lambs . The book fits the familiar pattern of reassuring Christians of the superiority of their own faith tradition by negative comparisons with a dehumanized Islam. But Kamal Saleem's titillating dance with violence and fame makes the book more complicated and more uncomfortable than most like it. By embracing the glamorous violence it claims to abhor, it raises readers' hopes of touching secret human meanings through it.

I first encountered Kamal Saleem when he appeared at Calvin College in November 2007. A look at his website told me immediately that he was not who he said he was. The signature of his deception was his statement that "in my family was the Grand Wazir of Islam." The term is ridiculous, a spurious title meant to mislead the innocent with an aura of authority. The audience, including many from the Grand Rapids Muslim community, watched Kamal Saleem's performance with quiet restraint. He told stories, now repeated in The Blood of Lambs, of being recruited as a child for missions against Israel via tunnels under the Golan Heights, disguised as sheep; of visions of a rider on a white horse who, drawn swords in hand, commanded him to sever the heads of the infidels. In one painfully disturbing account, the mother of his friend screamed with joy that her little boy had met a violent death and joined the martyrs in heaven. He continued with the story of his immigration to America to recruit for jihad. Instead he was converted to Christianity as the result of a car accident, when he was taken into the home of a Christian physician and cared for out of selfless love. These tales were interspersed with exhortations for America to "wake up" to the threat of radical Islam and testimonials to the power of Christ in helping him forsake his old life.

Kamal Saleem sometimes appears with two other "former terrorists," who also appear in the book. One is Zachariah Anani, a Canadian. Tom Quiggin, a former intelligence and security expert with the Royal Canadian Mounted Police, stated in the Windsor (Ontario) Star that Anani is "not an individual who rates the slightest degree of credibility." The other, Walid Shoebat, was exposed in the Jerusalem Post. According to his brother, who still lives in Beit Sahour, Shoebat left Palestine in 1978 to further his education in the United States. He met and married the daughter of a Baptist minister and converted to Christianity. The most extreme thing he ever did was attaching Palestinian flag stickers to utility poles around town. A 2006 letter from Rev. Alex Awad, president of the Council of Evangelical Churches in Palestine, warned American churches about him. Yet these three men march brazenly on, not only in churches but at Christian colleges and major universities.

In The Blood of Lambs, Kamal Saleem writes, "I wanted to be like Bond." In these pages he is Bond, James Bond, in size 6X. He gets those emphatic rivals, the PLO and the Muslim Brotherhood, both to recruit him. He recalls the intricate details of raids he carried out at age seven. Abu Jihad himself teaches him how to use an AK-47. He is shown off by Yasser Arafat as a model warrior. In Libya at age 14 he has Muammar Qaddafi gushing in gratitude. In Iraq, he waves to Saddam Hussein. He only meets one man smarter than himself, an American commander of the mujahidin at al-Qaeda, "the base," in Afghanistan. No major war of liberation in the Arab world seems to have gone off without his expertise. He schmoozes with rich oil sheikhs in the Emirates and Saudi Arabia and makes love to the beautiful daughter of one of them in London. Even if one were disposed to give these entertaining claims the benefit of the doubt, the book's frequent mistakes give the reader pause. The Islamic umma does not mean one world government, and it is not "coming." The PLO was a secular organization even though Yasser Arafat prayed and quoted the Qur'an.

The Blood of Lambs describes so many deaths and killings, in such pornographic detail, that we wonder whether indulging this secret lust is the whole point.

The book tries to make readers feel ashamed for asking nagging questions, but I am unmoved. Every other chapter is devoted to coyly reminding us of the dangers Kamal Saleem faces when he speaks publicly against "Radical Islam." Describing the controversy surrounding his 2008 appearance at the Air Force Academy, he writes that "a college professor specifically called me a 'fraud.' " I was that college professor, and having now read his book, I see no reason to withdraw the assessment. I want to know why a person who so vividly recalls maneuvers carried out when he was seven years old has such vague memories of his twenties. How did he come to the United States, exactly? When asked that question at Calvin, he answered "as a student, like you." In the book, he refers to students being funded by Arab oil money, which of course is true. But he avoids saying he was a student himself, and it would seem to have been impossible, since he says he was forced to drop out of school as a youngster to work for a cruel uncle. He writes that he got a temporary visa in Abu Dhabi and had $35,000 in his bank account from "an Islamist sheikh whom I had introduced to three very accommodating French girls." Did he really get a visa to come to Wassau, Wisconsin, to "freelance" around college campuses and in poor neighborhoods, evangelizing for the Muslim Brotherhood and recruiting for jihad? Then he "moved to a major southern city." Why not say which one? Was he working, and if so, where? Within a few pages four years pass, and he has his car accident. After his conversion to Christianity he meets his wife. Nobody knows that he was a "former terrorist," not even his wife, and not Immigration and Naturalization officials, not until 9/11.

Lest I be accused of endangering his family, I will not disclose Kamal Saleem's real name. Nor do I want to be "destroying reputations with unresearched words," as the book warns. So with the blessing of the Calvin College president, I telephoned his former employer, Focus on the Family, and with the help of colleagues John Hubers, an RCA pastor, and Habeeb Awad of Hope College, investigated his background. I spoke with Jim Daly, president of Focus on the Family, and with his assistant Ron Reno, who described his own job as "looking at everything we do with a cynical eye." What I was saying jibed with their own reservations about Kamal Saleem's story when they first heard it in staff devotions. Their concerns had to do not with his fabricated terrorist past but with his implausible conversion story. The physician treating Kamal Saleem took him into his own home because his medical bills were excessive and he had no health insurance? Then why the reluctance to identify the doctor, or the city and hospital where it happened?

I bear Kamal Saleem no malice. He is my age, a refugee and a victim who now, thanks be to God, has found new life. Much of his difficult biography is shared by the Arab Americans who were in the audience that evening at Calvin College. They also are immigrants who have settled down to find a better life and have lived here for decades as respected professionals and merchants. Like him, many fell in love and married. Some are Christians, some are Muslims. Some, like him, became Christians. Others did not. Still others married Christians who themselves converted to Islam.

The book purports to describe only "radical" Muslims, and once even concedes that "[m]any Muslims are kind and gentle people." But we meet no such Muslims in The Blood of Lambs. It repeatedly asserts that the core value of Islam is to kill Christians and Jews. This is common fare in Christian pulp fiction, where the fatuity of Islam matches its mind-numbing power. Still, some of the book's distortions are bizarre. It claims, for example, that the "rules of Islam" mean "no ham, no bacon, that sort of thing," and that Islam's higher rules are: "Do not drink alcohol. Do not use your right hand in the bathroom. Do not look upon women. Do not tolerate a disrespectful woman. Do not tolerate your grandma's Christianity." There are no adequate terms for such absurdities. Suffice it to say that if the subject were Jews, this book could not have been published.

Yet the book's seductiveness is more complex than this, and it does not really matter in the end whether or not Kamal Saleem is a fraud. The Blood of Lambs is obsessively, sadistically violent. It describes so many deaths and killings, in such pornographic detail, that we wonder whether indulging this secret lust is the whole point. Everyone longs to live a relevant life. It is as if Kamal Saleem has been very close to something that the reader, too, deeply yearns to experience, and that something seems to be encapsulated in the book's violence. Through violence the book pretends to give vicarious access to a more real knowledge of life. But our family has been through an attempted terrorist attack, and this is not just us, it is Umar abd al-Muttalib's family too—and many others, actually. My wife has survived cancer. Last summer in the Upper Peninsula we saw a bear in the wild (from our car!). Our niece just gave birth to twins. These are not our experiences only, they are every person's in some measure. It is insulting to be told that we have to look down the barrel of a gun to see life's inner meaning, or that only a killer can really understand Islam. Authentic experience comes when we see a man or a woman before we see a Muslim, a Christian, a Jew; when we hear a human voice before we hear "a thick Middle Eastern accent"; when the person next to us on the plane is a young man—with a father and a mother waiting for him—before he is a Nigerian or an American. Anything else leads down the road toward extremism. Although Kamal Saleem has forsaken much, he has evidently not yet forsaken that.

Doug Howard is professor of history at Calvin College.

This book was read by my book club at my church earlier this year. The book sparked great discussion among us. None of us believed that this book was fraud. We are all entitled to our own opinions, but I am cautious in expressing that a memoir that someone has written is fraud. I believe that after having read this book I understand a little better the deep hatred that people from certain countries have towards American's. It is a hatred that goes beyond anything I've ever encountered in my world of central Texas. Although it is still shocking to me that this hatred is nurtured in the home. I believe that the writer's aim was in waking up American's to the fact that there are people that hate us and want to annihilate us. We've forgotten 911---maybe not forgotten but it has become a thing of the past for many. Thank you.