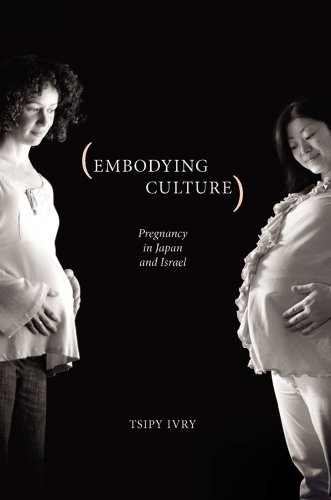 The Meaning of (Gestating) Life

Pregnancy in Israel and Japan.
May/June 2010

"What's the book about?"

It was a question I heard frequently over the holidays this past December, as I went to pre-Christmas rehearsals, parties, and church services carrying Tsipy Ivry's Embodying Culture: Pregnancy in Japan and Israel.

"It's about pregnancy," I'd say. "In Japan and Israel."
The inevitable response: "Why there?"

The gestation of Embodying Culture began when anthropologist Tsipy Ivry was concluding a research program as a graduate student in Tokyo, and became pregnant. A native Israeli, Ivry was surprised by what she describes as "an overwhelming and all-encompassing sense of becoming 'different,'" a sensation she attributes not only to the experience of pregnancy itself but also to the reality of being pregnant as an Israeli woman in Japan. This impression in turn led to a developing interest in the lived experience of pregnancy and how it is socially and culturally constructed in different societies.

In this ethnographic study, Ivry focuses on pregnancy as a "meaningful cultural category." The anthropology of reproduction is skewed toward a body of literature on the drama of birth, she argues, not on the much longer experience of the pregnancy itself. What work does exist on the subject of pregnancy tends to focus on "technologically oriented" assisted reproduction. Ivry instead seeks to "take up pregnancy as a meaningful unit of analysis" and thus contribute a study rooted in the " 'gray' and 'undramatic' category into which most pregnancies still fit."

The text itself, as you will have guessed by now, is quite dense, riddled with the multisyllabic expressions of a true academic. Reading it made me feel as if I were eating an entire plum pudding in one sitting—or studying for an exam back in graduate school. Yet the topic is one of great interest to me. Having been pregnant and given birth three times in the past five years, I know what it means to be an avid consumer of what Ivry calls "pregnancy information." When I was expecting my firstborn, I gorged on everything from BabyCenter to the Journal of Obstetrics and Gynecology, so I figured I was, if not Ivry's exact intended audience, close enough. I pressed on—and I was glad I did.

Although both Israeli and Japanese women experience pregnancy as a highly medicalized event, much as in the United States, the forms that medicalization take differ greatly. And these differences, Ivry argues, are deeply rooted in distinctive cultural contexts: in Israel, a struggle to stay alive amidst constant military conflict; in Japan, an emphasis on the betterment of society through the long-term maternal efforts of child-raising.

If we think of each culture's implicit understanding of pregnancy as a narrative, Ivry contends, we'll find that the "protagonist" of the Japanese narrative differs sharply from the protagonist of the Israeli narrative:

In the Japanese arena the protagonist of pregnancy is the interconnected entity of the mother-baby, whereas in the Israeli case the protagonists are the pregnant woman and her suspect fetus. Pregnancy is conceptualized as an early stage of parenting in Japan and is all about the interdependence of mother and baby and their ongoing relationships. The Israeli model defines pregnancy as a state "in limbo" that involves two separate individuals (of whom only one is a person).

This implicit understanding, in turn, shapes the experience of pregnancy for Japanese and Israeli women. Japanese pregnancies are understood through a lens Ivry refers to as "environmentalism," by which she means the notion that the mother's body (and thus her actions, both physical and mental) are responsible for the outcome of the pregnancy—in other words, the baby. To this end, Japanese ob/gyns place strict boundaries on the body of the pregnant woman: she must not gain too much weight, nor allow herself to become chilled, nor submit herself to the bumps and jerks of public transportation.

As I read through the book I found it impossible to avoid comparisons with my own experiences of being pregnant in the United States, and although some of the logic of Japanese ob/gyns escaped me, I discovered that I resonated with much of what Ivry wrote about Japanese women. The notion that the developing baby is indeed a baby right from the start reflects my own convictions, and I was especially drawn to Ivry's descriptions of the Japanese practice of taikyô, which involves speaking to the unborn baby. In the words of a bestselling Japanese prenatal guide, "It is practiced in order to deepen the bonds between the mother and the baby, through the mother's recognition of the baby and her acceptance of him."

Ivry's descriptions of Japanese mothers practicing taikyô with their unborn babies reminded me of reading the Bible to my daughter, moments after I discovered I was pregnant. I felt it was important to surround her with Scripture right from the very start. Who am I to say that one needs ears to hear the Word of God?

Although Japanese pregnancy culture embraces the growing child as a current—not future, or potential—person, and the abortion rate is lower than it is in the United States, abortion is not rare in Japan. "To this day abortions are available practically on demand in Japan," Ivry writes, though there are limitations on how far into a pregnancy abortion can be performed. Ivry stresses that "the assumption underlying prenatal care in Japanese medical institutions seems to be that a woman who goes to them for prenatal care wants her pregnancy. Otherwise she would have found a way to dispose of it earlier."

This assumption that a woman seeking prenatal care intends to keep her pregnancy does not hold true for the Israeli experience. Israeli pregnancies, Ivry argues, are understood through the lens of "geneticism," whereby the random assemblage of genetic material is the dominant factor in determining pregnancy outcome. The role of the Israeli mother is to try and determine the fetus's genetic makeup through a battery of prenatal diagnostic tests, and then to act according to the information she receives. Prenatal diagnosis is both widespread and aggressive, and in the event of an "abnormal" diagnosis, abortion is expected.

Ivry categorizes pregnancy for Israeli women as a "risky business." Unlike the mother-baby dyad of Japanese pregnancies, Israeli pregnancies are strictly woman (not mother) and fetus. "When a woman walks into my office and says 'I'm pregnant,'" Ivry quotes an Israeli ultrasound expert as saying, "I don't touch her. I don't say anything to her, I open a new card, and I write that I recommend an abortion. Then I sign her up on a paper that says that she is aware of all the testing that exists. Now we can begin to talk."

This attitude characterizes the experience of pregnancy for Israeli women, Ivry says. With more and more prenatal diagnostic tests available for consumption, Israeli ob/gyns encourage women to keep looking for "deformities" throughout the duration of the pregnancy. Because the fetus does not become a baby—a person—until the moment of birth in Israeli understanding, pregnancy is seen as a state of limbo, with potential babies being gestated by women who have the potential to become mothers.

Ivry describes an Israeli advertisement for the ultrasound company Alkoa, depicting a pregnant women with a see-through womb. The image is captioned: "Alkoa gives birth to perfection." I was frankly horrified by Ivry's accounts of this aggressive prenatal testing. She describes an event she attended where pregnant women and their partners were viewing a slideshow of ultrasound images: "For each and every 'normal' organ," Ivry writes, "[the lecturer] shows pictures of the same organ deformed (with no indication of how rare they are)"; clearly, "the overall impression of the lecture is that a myriad of deformities and abnormalities occur all the time."

When pregnant Israeli women contemplate amniocentesis, a diagnostic test that can identify chromosomal abnormalities but carries with it the risk of miscarriage, Israeli ob/gyns routinely frame the decision thus, Ivry tells us: women must weigh the grief of losing a healthy child against the grief of bearing a child with a disability. Nowhere is the grief over losing a disabled child so much as even mentioned; it is taken for granted that a disabled child is unwanted. As for the disabled community in Israel, Ivry notes that "Israelis with disabilities are often quoted in the media as supporting the diagnostic endeavor to prevent the birth of other people who would suffer the kind of life that they endure."

Ivry concludes that biomedical technologies are not only medicalizing the experience of pregnancy, they are pushing bioethical decisions into the hands of the women who undergo these "routine" tests, turning them and their partners into "moral pioneers." That's one way to put it.

Elrena Evans is the author of This Crowded Night, forthcoming this year from DreamSeeker Books.