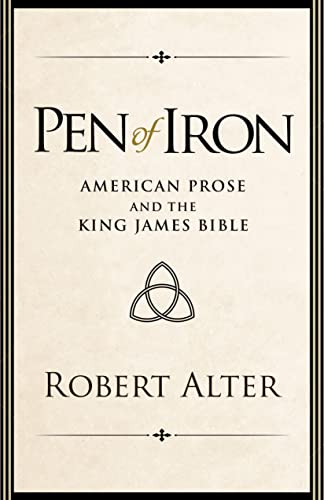 Biblical elements are not as obvious in Saul Bellow's short novel from 1956, Seize the Day, in which over the course of a few hours in a single day a much put-upon New Yorker collapses into psychological defeat. Yet through telling quotation Alter can still indicate where Bellow "had internalized something of [the KJV's] dignified, even stark, simplicity of diction" and where Bellow's prose imitates Scripture with "an unblinking gaze at life's end that excludes all melodramatic flourishes."

Briefer treatment of Hemingway, Robinson, and McCarthy comes in a chapter entitled "The World through Parataxis." The reference is to the style so prominent throughout the Old Testament, as well as in some of the New, featuring short, unadorned sentences placed side-by-side. Hemingway's The Sun Also Rises begins with an epigraph from Ecclesiastes 1:4-7 ( "the sun also ariseth" is in verse 5), but Alter sees the strongest KJV influence in Hemingway's famously direct prose, with "figurative elaboration studiously avoided." Alter makes this point through comparisons with passages from other modern novelists, where analysis, complication, qualification, and evaluation are built into the prose. Hemingway, by contrast, "showed how unadorned sequences of parallel utterances, as in the basic pattern of ancient Hebrew prose reproduced in the King James Version, could intimate strong feelings and fraught relationships."

Turning to Marilynne Robinson's Gilead, Alter recognizes that much of narrator John Ames' prose is American colloquial rather than directly biblical. But Alter shows that the narrator's consistent use of biblical images and allusions depends on immersion in the KJV. An example is a passage that Alter convincingly likens in style and tone to Jacob's first meeting with Rachel at the well in Genesis 24:

We were up before daylight to milk and cut kindling and draw her a bucket of water, and she met us at the door with a breakfast of fried mush with blackberry preserves melted over it and a spoonful of top milk on it, and we ate standing there at the stoop in the chill and the dark, and it was perfectly wonderful.

Cormac McCarthy's apocalyptic The Road tells of a father and young son who travel to what they hope might be safety in a world almost completed destroyed by a great conflagration. In this work Alter finds "a simplicity and phonetic compactness of diction, again with the King James Version as the great precedent."

The great success of Pen of Iron is to spell out the elements of biblical style that shape these books, but then also to indicate how the emotional force of these novels comes in large part from evocations conveyed by effective biblical style. The larger issue that Alter mentions at several points, yet without fully addressing it, is the awareness that when novelists invest so intensely in the language or images of Scripture, their work "is never entirely separable from an engagement with the ideas and imperative values of the Bible …. [I]nseparable from the stylistic traits [of the KJV] is a whole world of values with which both writers and readers have to contend."

This carefully posed relationship prompts questions of great moment. For Melville, Faulkner, Hemingway, and Bellow, the biblical usage that Alter details has been put to use for a vision of the world that might be called nihilistic humanism. The novelists certainly have created narratives that are in different ways driven, freighted, and empowered by biblical style. Yet the novels end in hubristic catastrophe (Moby Dick), literal and metaphorical self-immolation (Absalom! Absalom!), exhausted ennui (The Sun Also Rises), and psychological collapse (Seize the Day). They evoke with unusual power the tree being felled, but never a shoot on the stump.

A reader who is drawn into these works but who also affirms what Alter calls the Bible's own "ringing promise of redeemed history … a penetrating sense of the unfathomability of human nature … the belief in a benevolent, providential deity" might go two ways. One would be to condemn such authors for employing biblical style to subvert biblical values. In this perspective, the better these novels are at using biblical style to sweep readers along, the worse they are for denying the resolution to which the Bible's own narratives point. But the other perspective would be to welcome the intense moral wrestling of novels that, though they lack a biblical dénouement, nonetheless testify to the inescapable power of the Bible's moral universe. From this angle, we are viewing not something aflame for God, but nonetheless a flax smoldering with the spark of divinity.

For McCarthy's The Road and especially Robinson's Gilead, the ultimate questions are different. At the end of McCarthy's novel, the wandering boy—who has finally lost his father—ends up in the protection of a believing family. The boy, disillusioned by the terrors he has witnessed, cannot respond when he is asked to pray. But the mother of the family reassures him by saying that "the breath of God was his breath" nevertheless. As Alter notes, "here at the very end, the background of biblical language for the first time strikes an affirmative note."

In Gilead this affirmation, however challenged, is constant throughout the whole novel. Alter could have made more of his observation that "in Gilead there is an obvious concordance between style and subject, because the narrator, John Ames, is a preacher steeped in the Bible" who cherishes its picture of a providential deity. Surely the triumph of the novel is that Robinson both used biblical style skillfully (when so many aspiring "biblical novelists" have used it badly) and succeeded in shaping a compelling modern novel (when so few contemporary novelists would dare embrace the biblical values of John Ames).

Alter, thus, might have said more about the dialectic of style and substance in these works. If he chose not to do so, the result is still a treasure of insight and a welcome stimulus to Christian reflection.

1. For more such words and phrases, see Stanley Malles and Jeffrey McQuain, Coined by God: Words and Phrases that First Appear in the English Translations of the Bible (Norton, 2003).