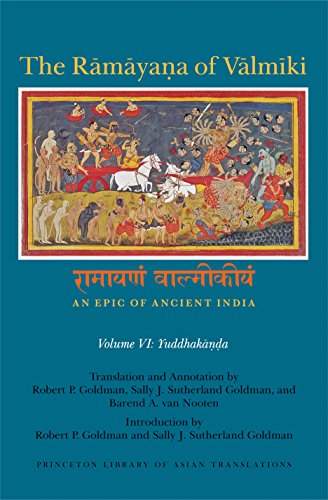 How Poetry Began with Grief

The Rāmāyaṇa of Vālmīki is the oldest Sanskrit epic. Over seven books and some 50,000 lines, the poem celebrates the life of Rama, incarnation of Vishnu, founder of the Golden Age, peerless warrior, master of scripture, obedient son and exemplary brother, dedicated lover and husband of Sita, daughter of the Earth.

Vālmīki composed his holy story of Rama and Sita sometime between the 7th and 4th centuries before the Common Era. That makes his poem younger than Hesiod's Theogony and Homer's Iliad and Odyssey, but roughly contemporaneous with writings of the Hebrew Prophets, Gautama Buddha, Confucius, Herodotus, Aeschylus, and Plato.

Nothing is hidden. Sacred legend, the struggle between good and evil, divine intention and human ambition, the cross-currents of personal obligation and right conduct, and the possibility of happiness, all unfurl in a work meant to be both read and performed. The Rāmāyaṇa informs, enlightens, and entrances, even in translation.

Bālakānda, or Boyhood, Book 1 of the epic's seven books, tells the story of the Rāmāyaṇa's own conception in its first four cantos. It also tells the history of Rama at least two ways, before the actual events unfold. Throughout, Vālmīki 's poem vibrates between heightened self-awareness and rapture.

Canto 1 opens with Vālmīki asking the sage Narada: "Is there a man in the world today who is truly virtuous?"

The sage responds that there lives a man named Rama. He then relates what might be called Rama's official history, from princely birth to exile and martial triumphs, ending with the Golden Age.

After he hears Rama's story, Vālmīki goes down to the riverbank to bathe. There, he sees a Nisháda hunter kill the male of a pair of krauñcha birds. Filled with grief at this injustice, the ascetic says: "Since, Nisháda, you killed one of this pair of krauñchas, ...