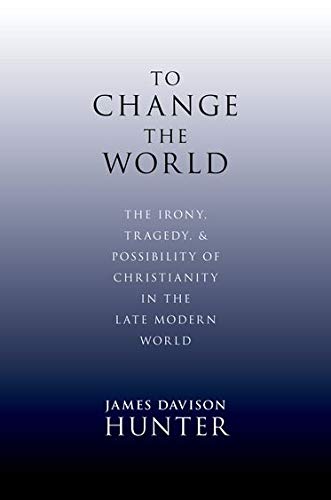 To Change the World: The Irony, Tragedy, and Possibility of Christianity in the Late Modern World
James Davison Hunter
Oxford University Press, 2010
368 pp., 40.95

How Not to Change the World

A call to "faithful presence."

It is a tale of three "essays" originating in a talk that Hunter gave a number of years ago, also called "To Change the World," which has circulated widely among leaders in the evangelical movement. The substance of that talk, with its analysis sharpened and extended, forms the first of Hunter's three essays in To Change the World, and it maps fairly neatly onto the "irony" signaled in his subtitle.

The irony is that there is no phrase more beloved to a certain kind of Christian than "to change the world." But in Hunter's persuasive account, the strategies those very same Christians have pursued are, by themselves, woefully incapable of changing the world. (Hunter's greatest interest is clearly Christianity's theologically conservative varieties, though he attends to mainline and progressive Christianity as well.) One group focuses on personal renewal and national revival, while another—championing a "Christian worldview"—locates the necessary condition for cultural change not so much in the heart as in the mind. Either way, the premise is that once the hearts and minds of ordinary people are properly revived and informed, the culture will change. "This account," Hunter says flatly, "is almost wholly mistaken."

It is mistaken because of its individualism: it ignores the central role of institutions in transmitting culture. It is mistaken because it is not just institutions that matter, but institutions at the cultural "center" rather than the "periphery"—so that an op-ed in the New York Times is of vastly greater importance than one in the Sacramento Bee. It is mistaken, perhaps most of all, in its egalitarian assumption that the hearts and minds of ordinary people matter—in fact, cultural change is almost always driven by change among a small élite who occupy powerful positions in those culturally central institutions.

And Christianity in America, as Hunter sees it, is very much on the periphery, for all its numerical strength. Its institutions, such as they are, tend to be weak, they tend not to be in culturally central locations, and they tend to address the "lower and peripheral areas" of culture—secondary education rather than university research, popular culture rather than high art, ministries of mercy rather than public policy. At their worst they glory in their marginal status, feeding a subculture that churns out substandard cultural products for consumption by other Christians, simultaneously the most energetic and the least effective culture-makers you could imagine.

If this is sounding tragic as well as ironic, wait until Hunter's second essay. In a trenchant analysis of the three most coherent Christian social movements of our time, he finds a shared fixation on politics, and on power conceived narrowly as political. Exhibit A, of course, is the Christian Right, which perennially survives the predictions of its demise. It is driven by nostalgia for Christian dominance and moral coherence. Exhibit B is the Christian Left, less well-organized but still vigorous, and driven by a desire for economic justice (and abhorrence of the Christian Right).

And Exhibit C, shrewdly presented, is the "neo-Anabaptist" faction carrying on the thought and work of John Howard Yoder, driven by a distrust for the ungodly violence of the market and the state. This last exhibit is Hunter at his best, arguing that in the very ferocity of their dissent from state power and Christian collusion with it, the neo-Anabaptists end up defining themselves in political terms just as much as the partisan movements they seem to oppose.

What none of these movements can truly imagine, Hunter maintains, is a genuinely cultural vision, one that seeks human flourishing and sees the intrinsic value of culture in its manifold forms. The tragedy of all three movements is their impoverished understanding of culture and of cultural power, and the degree to which they have become captive to ressentiment, the rehearsal of grievances (whether the enemy is secular humanists, Christian conservatives, or the imperial state) rather than the pursuit of a true common good.

And this leads to the last, and most hopeful, of Hunter's essays, in which he calls for a Christian posture that is neither "defensive against," nor "relevant to," nor seeking "purity from" the culture. (Be assured that, as with his whole argument, Hunter frames these broad categories with considerable nuance—he is no sloganeer but a deft analyst.) Rather, Hunter calls us to "faithful presence"—fully participating in every structure of culture as deeply formed Christians who also participate in the alternative community of the church. Whereas the first essay is relentlessly sociological, the last is surprisingly theological, even doxological, in its call for Christocentric, ecclesially formed cultural presence. The vision Hunter would have us embrace turns out not to aspire to world-changing at all—the very idea of "changing the world" is rooted in a quest for dominance that fundamentally misunderstands the Christian gospel and the way of Jesus, not to mention the realities of our pluralist, late modern society. Rather, we should embody a sacrificial love for our neighbors, of all faiths and none, expressed in acts of culture-making and institution-building that serve their good and leave the ultimate fate of our culture to the judgment and providence of God. And by this third essay, the strategic concern for élite presence has faded into the background—Hunter envisions Christians practicing that presence at the "periphery," in the "center," and everywhere in between.