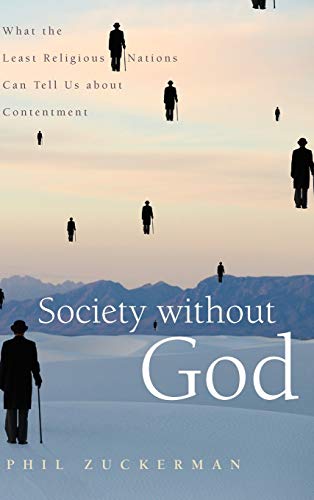 Society without God: What the Least Religious Nations Can Tell Us About Contentment
Phil Zuckerman
NYU Press, 2008
240 pp., 89.00

Happy in the State of Denmark

But now we have Phil Zuckerman's Society Without God, based on interviews in Denmark, which Zuckerman thinks is the country in all the world that registers the least measurable evidence of religion. First, a couple of caveats. Zuckerman conducted only 149 interviews (103 with Danes, 39 with Swedes, and 7 with immigrants from outside Scandinavia). As he acknowledges in an appendix, his sample was nonrandom, which means that "valid generalizability to the wider Danish and Swedish populations is not possible." Even so, there is good reason to suppose that a random survey would not produce greatly different results.

Zuckerman admits that he could not have called his book "Society Without Religion." While his interview subjects were hardly ever aware of thinking about God or considering Christianity, the great majority identify as Christians in some cultural sense. Only 3 percent of Danes claim to go to church in any given week, but 83 percent voluntarily make the traditional payment to support the state church. Half say they think they believe in a God, though only a fifth say this is at all important to them. But many more than this are married in church, baptize their children, have them confirmed, and keep the old holidays. They like church buildings, don't like to be called atheists, and have some understanding that their values go back to Christian roots.

What interests Zuckerman is how insignificant these vague feelings are to everyday life in Denmark. As an atheist/agnostic himself, he is happy to point out how well the country runs without any obvious religious faith. Denmark scores very high on social measures like health, welfare, and incidence of crime. Certainly better than the United States. Zuckerman sees the United States as a country run by fundamentalists, where politicians have to claim to take their orders from God. That seems to be the view from San Bernardino County, where he works.

But there is something in his description of Denmark that Zuckerman barely seems to notice. He does admit that children pick on classmates who are religious. As college students, religious believers are ostracized. Those he interviewed repeatedly told him that religion was an absolutely taboo subject. As one put it, "In Denmark, the word 'God' is one of the most embarrassing words you can say." Parents never talk to their children about religion. Nor did their parents before them, he reports.

Evidently, Danish society lacks any vocabulary with which to discuss religion or religious feelings. Zuckerman surveys many possible reasons for the decline of belief, but he never considers this matter of cultural fashion. He has described a spiral of silence on the subject of religion that is now into at least its third generation. A quarter of those he interviewed indicated that they thought they had experienced religious or spiritual "feelings," but they were completely tongue-tied in describing them. He quotes several as saying, "there are no words for it." None seemed to know how their families' religious observance had declined over the course of past generations. While the Danish elementary curriculum teaches children "about Christianity," one wonders what terms they use for the purpose.

Perhaps we can guess what has happened. Having an established church, like the Lutheran state church in Denmark, makes religion somebody else's responsibility. And when that church retreats in the face of political power, people look to a new authority. That authority may be public opinion. The Danish fashion, just now, is embarrassment surrounding the subject of religion, a shrinking vocabulary, and therefore a shrinking experience.

You have to wonder what in Danish culture will remind them of transcendence. Zuckerman's subjects supposed that religion had been replaced by "common sense." Zuckerman himself calls it "reason." But historians have learned to think of the invocation of Reason as a sign that reason has actually begun to shrink, to the assumptions of the semi-educated.

So what can we conclude from Zuckerman's interesting report? Maybe that a small and homogeneous society like Denmark, that nobody bothers and that doesn't depend on notable creativity or initiative, can ignore ultimacy. Was this what Kierkegaard noticed, some 150 years ago? Zuckerman calls this condition "contentment," and can't think of anything he could wish for Danish society. But what about the transcendence that inspires art and all the things of the spirit?

As we know, Aldous Huxley's Brave New World explored this territory fictionally, 80 years ago. By describing a stunted humanity, Huxley raised the question of whether "contentment" is enough. His secular dystopia did not seem to contain reading, thinking, writing, loving, creativity, or curiosity. We may soon see whether Huxley was prescient. Zuckerman puts contentment in terms of absences—of crime, of hunger, of illness. But surely human fullness must also include some sort of project for one's life and one's society.

It doesn't occur to Zuckerman to see Denmark as Harvey Cox c. 1965 might have, with completed secularization as the apotheosis of Christianity. And I would think that Cox himself would want more than just a lack of social friction to indicate that the Kingdom of Heaven had arrived.

Studying officially secular societies such as the former communist states would be a very different matter. They would have admitted they had not eliminated all vestiges of religion. Sociologists would surely detect an ideological orthodoxy that tried to function as religion. But we would expect that the material and spiritual failures of those regimes would show up in all sorts of data. History has already judged them by the boundary walls that symbolized their inhabitants' despair. It would be good to study the various communist experiments as relentlessly as we study the Holocaust, providing new generations with images of secular failure.

Secular utopias and dystopias try to escape the inevitable tensions between religious and secular elements. Oddly enough, some religious regimes also want to do away with these tensions, by sacralizing every aspect of life. Perhaps a vibrant society can only exist with some acknowledged tension between the mundane and the spiritual. Humans are ordinarily amphibious in this respect, being native to both these elements. Philosopher Charles Taylor calls it being "cross-pressured." Reinhold Niebuhr used to say that humans are part of the material universe, but also transcend it, and that it is from that paradox that religion is born.

So finally, one must ask what hope there could be for revival in a situation like Denmark's. Could the Danes recover a language to express such religious awareness as many of them have? One can hardly imagine religion disappearing entirely. If we ever make contact with beings on other planets, we can expect that they will also have had glimpses beyond the boundaries, in the way we associate with religion. Otherwise we will hesitate to say we have met with intelligent life.

C. John Sommerville is professor of English history, emeritus, at the University of Florida. He is the author most recently of Religion in the National Agenda: What We Mean by Religious, Secular, Spiritual (Baylor Univ. Press) and Religious Ideas for Secular Universities (Eerdmans).