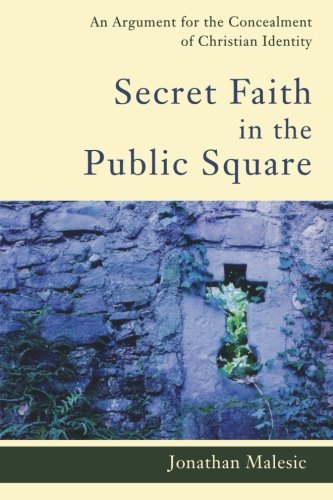 Secret Faith in the Public Square: An Argument for the Concealment of Christian Identity
Jonathan Malesic
Brazos Press, 2009
248 pp., 28.00

Should Christians conceal their religious identity in the public square?
May/June 2010

Theologian Jonathan Malesic's first book intervenes in these discussions, offering a perspective on Christian engagement in public life that is decidedly contrarian and disturbingly counterintuitive. Christians, Malesic says, should keep quiet about their Christian identity when they are in public. They should be secretive about their commitments to Jesus. They should conceal their membership in the church.

We Americans identify ourselves as Christians, Malesic charges, because we think our Christianity will get us something. Recall the state senate candidate who lists her church membership on campaign materials, or the attorney who makes his church membership known because he thinks it establishes him as virtuous, or middle-class, or upright, or trustworthy. The attempt to "use … religious identity as a means of getting ahead in the world" is "one of the longest-standing American traditions," says Malesic, and this commonplace ballyhooing of Christian identity has "done damage … to Christianity itself." It has, at a minimum, fostered serious confusion about what "being a Christian" means, and what the ends of Christian practice are and ought to be.

Most readers will be able to agree, at least, with a kind of minimal Kierkegaardian call: Christians ought not trumpet our own righteousness. But the kind of secrecy Malesic calls for is more radical than that. Because individual Christians use "the visibility of the church to serve their interests in public life," we should conceal "Christian identity in the public life characteristic of contemporary America." This concealment, Malesic hopes, will free both Christians and non-Christians "from the illusion that being Christian is meant to bring material rewards to American Christians …. In order to save American Christianity from Christendom, the assumption that Christian identity is for any worldly purpose is finally what needs to disappear."

Malesic argues that secrecy has long been a significant and distinctive component of Christian identity. In various times and places, when social and political arrangements threatened to erase the difference between "Christian" and "citizen" or "customer," theologians called for secrecy. In the 4th century, Cyril of Jerusalem crafted a liturgical secrecy, where the baptized kept the secrets of creed and sacrament from the not-yet baptized; through its very silence, this liturgical secrecy spoke back to the increasing prominence of Christians in public life, insisting that the Christian identity was principally about what happened inside the worshipping community—it was not principally about how one was perceived in the wider public sphere. Fifteen centuries later, Kierkegaard argued that secrecy could untangle "being a good Christian" from being a good capitalist citizen. For Kierkegaard, Malesic says, secrecy—specifically secrecy about the ways one loved one's neighbor—protected Christian love from commodifcation, from being turned into merely another act of bourgeois exchange. And in yet a third context, Bonhoeffer called for a hiddenness of Christian identity that aimed to protect the faith from a politics bent on coopting and ultimately destroying Christianity.

Malesic's call for secrecy revolves around the category of "identity." He does not want us to stop being Christians or doing Christian things. In a helpful analogy, he imagines what it might mean if he were to change his last name in order to conceal his relationship to his family: "I might still do what I could to support the family's causes in the wider world and adhere to long-standing family codes of conduct, and so my family membership would still be significant to my life outside the family." But what he would set aside, in changing his name, would be "any benefit or penalty it could bring me." So in Malesic's framework, people may still be the hands and feet of Christ in the world—they may still support Christian "causes" and conform themselves to Christian "codes of conduct." They simply would not identify their actions as such.

Having found precedent in Cyril, Kierkegaard and Bonhoeffer, Malesic also finds grist for his mill in an apparent antagonist: Stanley Hauerwas (or, perhaps better, "Stanley Hauerwas"). Malesic and Hauerwas agree on the problem: the appropriation of Christian identity by "Christendom"; the collapse of "Christian" into "American" or "consumer." They agree on the question: how to protect the church's distinctive identity? But their solutions are mirror images of each other. Be distinctively, visibly the church, says Hauerwas. Hide your Christian identity, says Malesic. On Malesic's terms, Hauerwas "gives too much weight to the need for a visible [Christian] witness." Like the early church in the context of empire, the church in America "does have a distinctive narrative forming its identity," Malesic concedes, "but it only need tell the narrative explicitly to its own members until such a time as the world is prepared (by grace) to understand."

The questions that animate Malesic's call for concealment are important ones. What social goods does it get me for people to know that I'm a Christian? Concomitantly, how do those goods compromise my Christian practice, my pursuit of virtue, my life with God? But the book needs another chapter. I wanted Malesic to spell out, in somewhat more brass-tacks ways, what this secrecy would actually look like for run-of-the-mill American Christians, for those proverbial people in the pews. (In the Age of Google, the distinction between "public" and "private" identity is not crystal-clear.) But at the end of the day, I'm not sure whether he has any intention of laying out the practical consequences of his proposal. Perhaps instead what he has given us is a calculated provocation.

I read Secret Faith in the Public Square at church—I went to my church, cranked up the heat in the church library, and sat there reading, because I wanted to remind myself that I was reading as a member of a particular parish, a small Episcopal church stuck on the edge of an interstate in Piedmont North Carolina. This is not the downtown Episcopal church where the governor and state legislators go; this is not one of those Episcopal churches filled with beautiful people dressed to the nines every Sunday; this is a decidedly ordinary church where on Sunday mornings we see lots of retirees, and lots of dying people, and lots of nurses, and a klatch of grad students.

It so happens that I read Malesic's book as a member of this particular church during the season of Lent, a season peculiarly concerned with secrecy and disclosure. Ash Wednesday is the day that prompts members of my church to what is for many of them their most public declaration of Christian identity. Most members of my parish will never run for office, broadcasting their church membership in that connection; but on Ash Wednesday they broadcast their entrance into Christ's life and death by going to their nursing jobs and walking around their retirement communities with a great gash of black across their forehead. And yet the rest of Lent is properly devoted to something secret. In the Episcopal tradition, this is the season when people may consider making a secret, private confession to a priest. Indeed, our parish Lenten study this year is about penance, and one of our major topics has been what may be known and what may be unknown. So—secrecy and disclosure are at the very heart of this season.

The disagreement between Malesic and Hauerwas can be read through my local church: they have different answers to the question, Where are we? If we are still in Christendom, if Christians are still running the show, if it still scores points in public to say that you're a Christian, then Malesic's call for secrecy is much more compelling than if, in fact, we are already living "after"—after the moment where being a Christian is about power. And that, in turn, may depend not only on where we are but on who the "we" is. I'm willing to say that public performance of Christian identity got the 43rd President of the United States some goodies, and we all—nation and church alike—would have been better off if he'd read, and heeded, Malesic's call for concealment. I'm not persuaded that's true of many people in my parish. Indeed, what I think when I look around my ordinary, beloved church is: It's hard enough to tell that any of us is a Christian as it is. That thought, of course, underscores Malesic's stinging insight: it's hard to tell that I and my fellow congregants are Christians precisely because our "Christian identity" is so thoroughly imbricated with our "identity" as citizen/consumer/family man/etc. Still, the last thing I want to say from this particular pulpit is "Hush up! Keep this a secret! Don't tell anyone what exactly that light-not-under-your-bushel is." But I do want to read this book with my sisters and brothers here, and let Malesic help us think—perhaps in a chastened key—about what concealment and disclosure of our Christian selves beyond the walls of this church building might mean.