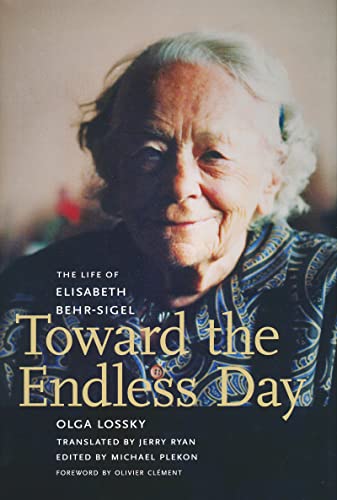 When I told people that I was writing my dissertation on Elisabeth Behr-Sigel, the first question was always, "Who?" quickly followed by, "How do you spell that?" So much for the immediate recognition factor of a Barth or Luther dissertation.

For me it was, in part, a debt of honor. An Orthodox priest friend, Michael Plekon (the editor of this volume), put her work in my hands when I was in college, desperately seeking reasons in favor of the ordination of women while in equal measure desperately trying to avoid the conclusion that I was called to ordination myself. I knew the Roman Catholic arguments against, the Lutheran arguments for (and a few Lutheran arguments against, for that matter), and then there was the hazy world of feminism, so diverse as to make its exact role in this dispute unclear to me. "Here's someone outside the Western crossfire," Plekon told me, and I settled down to read the work of an unlikely combination indeed: a very aged lay Orthodox theologian, a woman, a supporter of the ordination of women in the church most unanimously opposed to it, a reader and appreciator of feminist theory who nevertheless based her arguments entirely on the Scriptures, the church fathers, and Orthodox theology from the medieval hesychasts to 20th-century neopatristic scholars. Who would have thought it?

This remarkable woman, Elisabeth Behr-Sigel, is still barely known in the United States, but in Europe it's another story. Everybody knows of her; and it seems she knew everybody who was anybody. Draw up a list of the great Orthodox theologians of the 20th century; she knew them all—Sergius Bulgakov, Vladimir Lossky, Georges Florovsky, John Meyendorff, Olivier Clment, Kallistos Ware (to name just a few!). Her best friend at university was Emmanuel Levinas, with whom she corresponded until his death in 1995. The non-Orthodox know her as well as the Orthodox, as she was an ecumenist from the very beginning; and, not surprisingly, the chief thing known about her is her theological support for the ordination of women.

This is certainly not to be discounted. Behr-Sigel started reflecting on the topic at the age of sixty-nine, when invited to give a keynote speech at the first-ever international gathering of Orthodox women at the Agapia convent in Romania in 1976. Over the next three decades, till her death at the age of ninety-eight, she produced an impressive corpus on the subject of women in the church. Already by the early 1980s she had become convinced of the theological acceptability of women priests. The problem is that this hardly represents the whole story of her long life and varied interests. And it doesn't explain the most surprising thing about Behr-Sigel's famous opinions—namely, that she never once got attacked for them. I have found modest statements of disagreement (though virtually no engagement with the arguments themselves) but not a single harsh or dismissive word. In short, Behr-Sigel is already revered. How can this be?

The answer is found in this beautifully rich biography, its materials culled from Behr-Sigel's diaries and unpublished reminiscences, from interviews and anecdotes, from her extensive published paper trail and Saturday mornings spent together over coffee. Olga Lossky—herself a published novelist and a member of the famous Lossky clan—gives us a compelling portrait of this surprising theologian. Simply as a story of a Christian living through the tumultuous 20th century, it is fascinating reading, for Westerners as much as those in the Christian East. A few items are worth special notice.

For one, the most meaningful relationship in Behr-Sigel's life was with the priest-monk Lev Gillet. Behr-Sigel was married and stayed married to her Russian émigré husband André Behr, with whom she had three children, although he was shattered early on by his experiences in the war and subsequently struggled with alcoholism till his death in 1968. But her relationship of genuine intimacy, chaste but intense, was with Gillet. He, like her, was a convert to Orthodoxy in his youth. She came from a Protestantism whose chief dogmatic content was "freedom of conscience," the tail end of 19th-century liberalism; he came from a Roman Catholicism that declared in the 1928 encyclical Mortalium Animos that the single ecumenical goal was universal conversion to Rome, for Orthodox and Protestants alike. Both Behr-Sigel and Gillet fell in love with Orthodoxy and its sobornost ecclesiology, which they discovered through Russians fleeing the fallout of the Revolution. Yet almost immediately this love was tested by internal turmoil. The Parisian Orthodox disputed whether their churches, still largely composed of immigrants yet beginning to draw in Westerners like Behr-Sigel and Gillet, should break ties with a Russia compromised by communism and attach to the ecumenical patriarchate instead. A schism of sorts ensued right in Paris as some stayed with Moscow and others went to Constantinople. As cultural Westerners and converts, Behr-Sigel and Gillet explored together a vocation of bridge-building between estranged and hostile communities, within Orthodoxy as well as without. Loyal to the East, they were unabashed ecumenists, diligently and generously finding divine truth in all expressions of the Christian faith. This mutual understanding created the deep spiritual bond between them. Their vastly different life circumstances, and the unsurprising tension in such closeness between a man committed to celibacy and a woman committed to her husband, made it at times a rocky relationship. Lossky tells the story with a graceful mixture of honesty and delicacy.

A significant portion of the biography deals with Behr-Sigel's experiences during World War II. Wartimes tend to take up disproportionate space in the tales of people's lives, as here, but with good reason: the crisis clarifies a person's commitments just as its exposes her true personality. Herself an Alsatian, and during her marriage resident in the city of Nancy in Lorraine, Behr-Sigel was in not infrequent danger. For a while, separated from André during his military service, Elisabeth had to flee west to Brittany with her children. Back home, struggling with rations and passing off Jewish children as relatives, they were once nearly struck by a falling bomb that exploded only fifty meters away. There was always an added element of risk for Elisabeth: she was Jewish. Her mother, Emma, a distant relative of Sigmund Freud's, had come from Bohemia; all of Elisabeth's Jewish relatives were murdered in the death camps. Even in Nancy, Elisabeth had to give up work, lest background inquiries uncover her roots. She had also been the regional representative of the journal Esprit, banned by the Gestapo, which set about systematically investigating the journal's representatives. Lossky reports a particularly poignant story in which Behr-Sigel watched neighbors being loaded into the back of a truck, wondering if she should throw herself in the path of the truck to stop it—and knowing it ultimately would do no good. In all this darkness, the one light was a regular clandestine gathering she and André hosted of Orthodox, Catholics, and Protestants bound by their common Christian opposition to Nazi ideology. This was, if anything, the true "church" that she sought all her life. Her already profound ecumenical commitments were sealed by the experience.

Aside from these more dramatic experiences, Lossky shows how Behr-Sigel lived her convictions in many different spheres, from her eight months of lay pastoral ministry in the Vosges mountains for the Reformed Church of Alsace (yet after she had been received into the Orthodox church!), to her almost yearly trips to England for meetings of the Anglican-Orthodox St. Alban and St. Sergius fellowship, to her vice-presidency of an anti-torture organization, Action des chrétiens pour l'abolition de la torture (ACAT), to her participation in the massive WCC project on women and men in the church. Elisabeth's written output is impressive: she proposed the typology of Russian saints that is still definitive today; she pioneered what has been called "the new hagiography" with her enormous biography of Lev Gillet, not avoiding the difficult aspects of his personality while still convinced of his exceptional sanctity; and she was an editor, contributing a great number of pieces of her own, of the theological journal Contacts (itself an attempt to bridge the jurisdictional divides in French Orthodoxy) and Paris' francophone parish periodical Bulletin de la Crypte. But it is clear from Lossky's account that it was Elisabeth's attention to the people around her, cultivating their faith while living her own, that evoked such affection. It is no surprise that she has been called equally "Orthodoxy's premier woman thinker" and "the grandmother of western Orthodoxy."

All Christians have their saints. Even those churches without an official canonization process honor their great lights through the acclamation of the vox populi. Within the ecumenical movement of the past century that has begun to break down the walls of hostility between us, great lights have emerged to show the way past Christian division. In Elisabeth Behr-Sigel we have one of the first ecumenical saints. A pioneer of the new hagiography, she has in turn been accoladed with this honest, interesting, and uplifting hagiography by Olga Lossky. It is unlikely that any ecclesial body will canonize her St. Elisabeth anytime soon, but the church catholic can still acclaim this ecumenical saint who takes her place among the great cloud of witnesses.

Sarah Hinlicky Wilson is assistant research professor at the Institute for Ecumenical Research in Strasbourg, France, and a consultant to the International Lutheran-Orthodox Joint Commission.