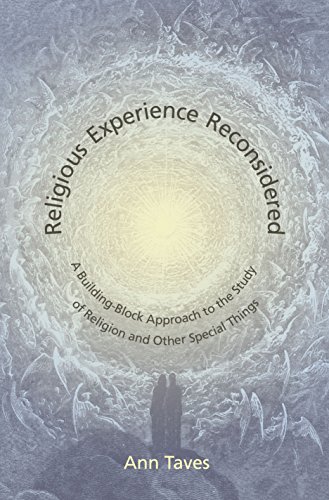 We can see now that this once-dominant set of assumptions is not really a generalized theoretical synthesis of humanistic and scientific empirical "findings" about religious experiences but rather a particular philosophy-of-religion position taken on a steeply theologically graded field of thought. It made sense in terms of its particular time and place, but it is problematic in certain ways. Among other issues, it had strong elective affinities to and resonance with theologically liberal Protestantism.

How so? The distinguishing mark of Protestant liberalism—think Schleiermacher—was its centering of human subjective experience as the originating source of religious faith, belief, practice, and organization. People first have real, subjective religious experiences; then, in response, people attempt to formulate the meaning of those experiences in belief systems, rituals, and so on. By prioritizing subjective religious experience over other authorities, liberalism thought it could insulate Christianity—the "highest" of religions, when "rightly understood"—from the skeptical corrosions of modernity, which liberals saw as having undercut the authority of Scripture, historical tradition, popes, etc. It was only a few steps from the Protestant apologist Schleiermacher to, say, the doubting-but-hopeful William James, in developing this particular scholarly approach to the study of religious experiences. James' 1902 Gifford Lectures, published as The Varieties of Religious Experience, defined religion as the "feelings, acts, and experiences of individual men … in relation to whatever they may consider divine." Eliade, Otto, Smart, and others followed that lead.

Fast-forward 90 years. In the last two decades, that older view has been largely overturned by a "social constructionist" view of religious experience, driven by the "linguistic turn" in the humanities and social sciences. This new view assumes that religious experiences are not existent things but post hoc human inventions. They are viewed as not essentially different from "non-religious" experiences, making it illicit for scholars to "essentialize" them as innately religious. "Religion" itself is not taken to be a natural kind in reality but rather a social formation fabricated by human language and interaction. Religious experiences are thus discursively constructed by and in communities of faith, which share the symbolic and linguistic resources to evoke and define them for believers. The variety of religious experiences shares nothing of intrinsic essence—people simply use the same label to identify them. And very likely such social constructions of experience serve particular people's specific political, epistemic, and theological self-interests.

Obviously, the old liberal Protestant background has been dumped from the constructionist approach. Constructionist scholars may espouse hard ontological naturalism (reducing religion to "nothing but" some part or imperative of nature—psychological need, perhaps, or socioeconomic function, or reproductive fitness, or a combination thereof) or merely methodological naturalism (bracketing away questions of ultimate reality and truth to focus on the more immediate work of scholarly explanation). But in either case Schleiermacher has been dismissed. He and his fellow Protestant liberals have been replaced by constructionist and deconstructionist theorists like Erving Goffman and Michel Foucault. A senior religious studies scholar at my former university told me that, when he was first hired decades before, the college catalogue listed a course entitled, "Christian Morality and Sexual Hygiene," a leftover from former days when religious studies functioned as a kind of glorified, liberal Protestant Sunday School amid its larger, vaguely post-Protestant academic setting. All of that was soon purged, he said. By my time there, in fact, his department seemed intent on cleaning out most traces of anything traditionally Christian, and even "Western." (Sometimes the felt need to escape from the skeletons in the closet can become obsessive.)

Many Christians (and other people of faith) will likely be put off by the social constructionist approach to religious experiences as being inherently hostile to theological claims. Yet I suggest that there is something important and valuable in the (de)constructionist approach. The more I learn from Karl Barth's Church Dogmatics, the more I am tempted to think that I should stop calling my main academic field of study "sociology of religion" and start calling it the "sociology of idolatry." It seems to me that a massive amount of "religion" in the world, including plenty in the Christian world, and no doubt lots in my own life, consists of immense human projections and constructions that are in fact driven by our own human needs and wants, and not by the reality of Jesus Christ. Theologically speaking, that is idolatry. I see no reason why Christians should have a stake in defending "religious," "faith-based," or "spiritual" experiences generally. Indeed, Barth has convinced me of the importance for Christianity of the atheist critique. Feuerbach and Nietzsche are in fact valuable helpers in providing the tools and guts to strip away the ubiquitous self-deceptions of "religion," even when in the name of Christianity—trappings that often have little to do with the living Trinitarian God. The latter, of course, needs no protection by us from social constructionists. Meanwhile, we might appreciate the harshly faith-refining perspective that constructionists offer, even if taken with a few grains of salt.

In her book, Ann Taves attempts to make sense of all of this, moving the study of religious experience forward in a helpful direction. Accepting the critiques of both the traditional and constructionist approaches to religious experiences, Taves seeks build a more adequate theoretical framework of investigation. Instead of starting with presuppositions shaped by Protestant liberalism or strong social constructionism, Taves encourages us to begin by assuming that people often do have real experiences that they (sometimes) come to consider religious, and then to examine the processes by which those experiences come to be understood as "religious" when they do. Also, rather than starting exclusively with those experiences that have already been defined as "religious," Taves advocates an initial broader scope that attends to all "anomalous" and "ideal" experiences, those which are characterized by what she calls "specialness": experiences which, through "singularization," are then set apart from the ordinary. The question then becomes how people ascribe a religious versus non-religious character to those non-normal experiences.

Taves' work draws heavily on attribution theory in psychology, which seeks to understand generally how and why people explain events and causes as they do. Taves also keys on Emile Durkheim's Elementary Forms of Religious Life, which, she argues, distinguishes between whole religions as systems per se and bits and pieces of "sacred things, that is, things set apart," which (sometimes) as parts put together compose religions. Thus, ideal and anomalous experiences having the quality of "specialness" may or may not be identified by people as "religious," depending upon a variety of factors involved. What "religion" is, Taves declines to define. In discussions more sophisticated than I can do justice to here, Taves clearly and helpfully examines complex issues of human consciousness, the unconscious, empirical access to experience, dreams, causal attributions, neuroscience, religious conversion, comparative methods, the difference between religion and religions, and ways to link humanistic and scientific studies of religion. Her approach is methodologically naturalistic yet seeks to avoid crass reductionisms—and even hints at the possibility and significance of "real" religious experiences.

More broadly, Taves helps us to think critically, but not dismissively, about claims to religious experiences. Few Christians will want to discount all religious experiences as mere coincidences, brain flukes, or human inventions. Yet when claims to religious experiences proliferate and are often trivialized ("God opened up a parking spot for me"), it is hard not to become skeptical. One parachurch organization I know of recently celebrated the seemingly miraculous saving of the life of one of its staff people after a horrible sporting accident, even while the gruesome death of the spouse of another staff member in a different sporting accident around the same time was virtually ignored. It was officially clear that God was behind the happy story, which became for the organization a collective religious experience, but not many people spoke about the dead spouse problem. In private, some raised the obvious hard questions, but in public such questions were not welcome. One felt for the newly widowed spouse.

So then, when, where, how, and why might the Holy Spirit and/or human causal attributors be involved in people's various "religious experiences"? How might believers distinguish the true hand of God from idolatrous projections of their own and others' human wants and needs? There are no easy answers here. Psychology, anthropology, and religious studies are certainly not going to adjudicate such matters. Still, smart, fair, and well-informed theoretical reflections, like Taves', when theologically read, can at least help to sort out some of the issues involved and, if nothing else, provide cautionary reminders of the immense potential for human-driven idolatry, even sometimes in the name of worship of the true God. Heaven help us.

Christian Smith is professor of sociology and director of the Center for the Study of Religion and Society at the University of Notre Dame. He is the author most recently of Souls in Transition: The Religious and Spiritual Lives of Emerging Adults (Oxford).