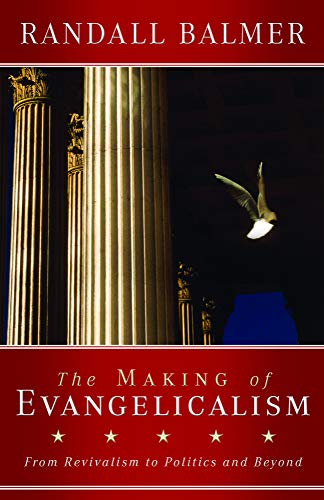 The Making of Evangelicalism: From Revivalism to Politics and Beyond
Randall Balmer
Baylor University Press, 2010
97 pp., 30.99

It would be difficult to find a more examined religious movement than evangelicalism. Every couple of months a new book appears seeking to define and describe it. Historian Randall Balmer contributed his take on the movement some time ago in Mine Eyes Have Seen the Glory: A Journey into the Evangelical Subculture in America, an engaging historical and sociological look at evangelical variety that PBS made into a documentary, and he has returned to the subject over the years.

Now Balmer offers a crisp overview, attempting to bring some order out of the chaos that surrounds evangelical definition. Few are better qualified for this task than Balmer, who grew up in an Evangelical Free Church pastor's home. (Although we did not meet each other as children, our fathers were evangelical pastors in the same midwestern city at the same time, and surely they met at least once.)

The Making of Evangelicalism is Balmer's interpretation of evangelical history; it does not pretend to be a mere presentation of facts, although it contains many facts. Rather, it's a hybrid of historiography and homiletics. By the end, the reader knows that Balmer has a passion for evangelicalism and wants to set it straight where it has gone astray. His disdain for the so-called Religious Right is palpable.

Balmer tells evangelicalism's story through four turning points: "the transition from Calvinist to Arminian theology in the embrace of revivalism," "the shift from postmillennialism to premillennialism," "the retreat into a subculture," and "the rise of the Religious Right." Every student of evangelicalism will recognize this story; it has been told numerous times in slightly altered form by historians such as George Marsden, Mark Noll, and Joel Carpenter. Balmer puts his unique spin on it in ways that make it both spell-binding and troubling.

According to Balmer, modern evangelicalism was born out of the Great Awakenings of the early 18th and 19th centuries. The First Great Awakening, led by Jonathan Edwards and George Whitefield, "introduced to American society a peculiar strain of evangelicalism that remains America's folk religion to this day." It was theologically Calvinistic but at the same time emotional. The Calvinism appeared in its assumption that revival is entirely and exclusively a work of God that humans cannot cause or control.

The Second Great Awakening changed the course of evangelicalism in an Arminian direction, especially under the influence of revivalist Charles Finney. Balmer's explanation of Finney's impact on American evangelicalism is incisive but mistaken insofar as he associates it with Arminianism. As I have shown in Arminian Theology: Myths and Realities (2006), classical Arminian theology affirms total depravity, the necessity of supernatural, prevenient grace for saving faith, and justification by grace through faith alone. In other words, it is a Reformation theology.

Finney's theology was thoroughly semi-Pelagian in that it denied total depravity and the necessity of transforming grace for saving faith. Whereas classical Arminian theology has always affirmed the divine initiative in salvation, Finney denied it and placed the initiative in revivals and salvation on the human side. Finney's doctrine of justification was ambiguous and implied a positive role for sanctification in justification.

The canard that Finney is the epitome of Arminianism has been spread by certain anti-Arminian Calvinists for almost two centuries, but anyone who reads Arminius or Wesley or later Arminian theologians such as Richard Watson, William Burton Pope, John Miley, H. Orton Wiley, and Thomas Oden (especially The Transforming Power of Grace) and compares their theologies with Finney's (e.g., in Lectures in Systematic Theology) will immediately see the difference. For Finney, truth presented clearly and powerfully is all a sinner needs to convert; for all true Arminians, every sinner needs a special work of grace to exercise faith in Jesus Christ even in the face of the most powerful presentation of the gospel.

I do not think Balmer is guilty of that canard because I am persuaded his description of Finney as an Arminian is innocent; he is simply assuming the truth of what others have said. But some of the "others" were not so innocent: they clearly had read Arminius and Wesley and the leading 19th-century Arminian theologians.

Balmer's second turning point involved another evangelist, D. L. Moody, who was instrumental in the wholesale adoption of premillennial eschatology to replace the prevailing postmillennialism of earlier evangelicals, including Edwards and Finney. As a result of this shift, Balmer argues, evangelicals gradually gave up on social transformation in favor of a purely individualistic "life boat" gospel. This is the story told earlier by evangelical historians Timothy Smith and Donald Dayton (e.g., in Dayton's Discovering an Evangelical Heritage) and repeated by many others.

Again, I recognize that Balmer's telling of the story of evangelicalism is a historian's and not a theologian's, and it is of necessity somewhat over-simplified. But at times it is a bit of a caricature as well. Not all premillennialists have been against social transformation; and postmillennialist optimism, for all the good it led to, had problems of its own, including especially its lack of biblical support.

The third turning point in Balmer's account—closely connected with the second, as suggested above—was evangelicalism's inward turn and its departure from the public square into its own ghettoized subculture. Having grown up in that world, I am painfully aware of what Balmer is talking about. Especially after the 1925 Scopes Trial debacle, conservative Protestantism in America tended to wipe the dust of secular and liberal culture off its feet and stay within its own institutions. From roughly 1925 until the 1970s, American evangelicalism had little interest in dialogue or cooperation with the wider world of politics and religion and scholarship.

Here, however, Balmer makes an important exception by noting that throughout this time evangelicals were in the forefront of using communication technology to get their message across. Although he only mentions her in passing, Pentecostal revivalist Aimee Semple McPherson was the first woman and one of the first Christian ministers to establish her own radio station. At the time of her death, in the 1940s, she was in the process of applying for an experimental television license to spread her Foursquare gospel. Other Pentecostals and fundamentalists were equally adept at adopting cutting-edge means of spreading the gospel.

Perhaps the most controversial aspect of Balmer's book is his claim that the rise of the Religious Right in the late 1970s involved deceit. Publicly the political activism that began to flourish under that banner was proclaimed to be a reaction to abortion and homosexual rights, but in fact, Balmer says, it originated as an attempt to protect evangelical institutions from government intrusion, spurred in particular by outrage over the irs's 1976 revocation of Bob Jones University's tax exemption due to racial segregation. After the fact, Balmer contends, the evangelical founders of the Religious Right masked their true motives.

What starts out as a relatively calm and insightful story of the rise and evolution of evangelicalism in America ends with an assault on evangelicalism's contemporary condition. As much as I regret many evangelicals' dubious alliances with political movements, I do not think evangelicalism as a whole deserves to be tarred with that brush. The media has done that to us, and apparently Balmer has largely adopted that view. Many evangelicals never bought into the Religious Right and have been critical of it. I wish Balmer and others who write about evangelicalism would acknowledge that fact more forcefully.

Roger E. Olson is professor of theology at George W. Truett Theological Seminary, Baylor University. He is the author of The Westminster Handbook to Evangelical Theology (WJK).