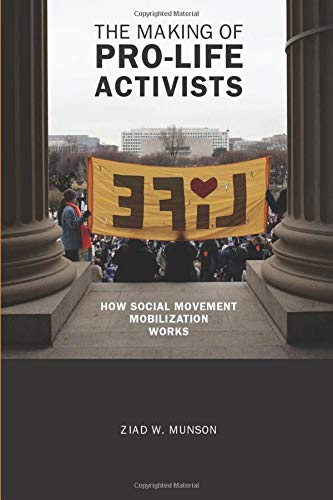 An assumption-challenging study of the pro-life movement.
May/June 2010

A colleague once quipped that the only problem with sociology is that it is overrun by sociologists. I am inclined to agree when reading sociological treatments of the abortion conflict. So it was a truly welcome surprise to read Ziad Munson's The Making of Pro-Life Activists, a book that quietly demolishes a lot of overrated sociology.

Munson conducted 82 life histories of pro-life activists in the service of asking a seemingly straightforward question: Who becomes a pro-life activist and why? One might suppose that those with strong pro-life sentiments simply join the movement. Yet Munson found that only 13 percent of the activists in his sample were "self starters"—citizens whose strong moral convictions led them to initiate contact with a pro-life organization. In addition, approximately half of the activists in Munson's sample were still ambivalent about abortion or even pro-choice prior to their participation in the pro-life movement. For these activists, pro-life sentiment was a consequence rather than the cause of participation in the right-to-life movement.

But why would the unconverted participate in the pro-life movement to begin with? As Munson explains, such reluctant participants often wanted to please a friend or colleague. One of his converts, for example, first attended a legislative hearing on abortion at the urging of her trusted pro-life physician. These unlikely activists simply "stumble[d] into contact with different pro-life organizations in the course of their daily lives." In other words, "activism emerged not because they consciously sought it out to express their beliefs but as an unintended result of their ordinary lives."

Turning other assumptions on their head, Munson also found that deeper religious conviction was often the result of movement participation rather than the cause. The most famous example of such a transformation, of course, is Bernard Nathanson, a former atheist and cofounder of NARAL Pro-Choice America, who converted to Catholicism years after becoming involved in the pro-life movement. Yet Nathanson's story is not as extraordinary as it might appear. Munson writes, "one out of every five activists in my sample found their religious faith either contemporaneously with or after their mobilization into the pro-life movement."

Munson does an outstanding job of demonstrating what a dynamic and messy process movement mobilization is. Becoming a pro-life activist is something like a religious conversion. It happens in stages and usually when people are open to new ideas thanks to a turning point in their lives. But The Making of Pro-Life Activists is less persuasive when it assesses the relationship between ideology and pro-life activism. Traditionally, sociologists have argued that abortion activists are inspired by a desire to shore up traditional gender roles and sexual norms. Munson agrees in part. He does find that it is not altogether wrong to accept "the common conclusion that the pro-life movement is really about the defense of the traditional family and an attempt to exert control over (especially female) sexuality." In fact, he estimates that nearly 25 percent of his sample fit this caricature.

Yet on closer inspection, even Munson's gender traditionalists appear far less worried about sexual control and male authority than he suggests. Munson's patriarchs turn out to be citizens who think that men should have some say over the fate of their unborn children. As one activist put it, "You know, [the biological father] helped create the child. He should have some right; he should have the right to a hearing. At least be heard and be a factor, to consider." Another female activist recalled a male friend who was "devastated" by his former fiancée's decision to abort their child. This desperate friend "even offered to support [his fiancée] for the rest of her life if she would have the baby." Such reports sound more like pleas for greater sexual equality than demands for male privilege and power.

Other sexual traditionalists in Munson's account simply think that men and women need to responsibly deal with the consequences of their own actions, especially when they lead to the creation of a dependent and helpless human organism. One subject said: "If you have the opinion that you don't want to have a baby, then I think you are responsible to make sure you don't have one …. Deal with it. I don't mean to say that without any compassion for people's situation and the pain or fear that's involved with that, but, still, now there's another person involved. They're little, they're defenseless." Once again, this subject's response sounds less like what Munson calls a "defense of the traditional family" and more like a case for a responsible and decent liberalism.

Of course, many pro-lifers do have traditional beliefs about love and sexuality. But this doesn't mean that their pro-life activism is motivated by a desire to shore up conservative sexual norms or the traditional family. As the historian David Chappell has put it in the context of the civil rights movement, such beliefs are not the ones that make the campaign for a right-to-life "move." They are present in the movement, but they don't matter very much; they don't give the movement life.

Munson concludes by arguing that the pro-life movement is ideologically incoherent: "not all the moral understandings of abortion come from commitment to a politically conservative set of ideas. Concerns over civil rights, racism, and the protection of the weak coexist in uneasy company with concerns over personal responsibility and female sexuality, the deceit of abortion providers, and the will of God." I have no idea why these concerns are necessarily in tension. Is concern over civil rights contrary to the will of God? Does worrying about personal responsibility conflict with a commitment to racial equality? Can ideologically coherent citizens worry about public deception and the weak? Munson doesn't answer these questions.

In the end, Munson believes that these apparent moral tensions within the pro-life movement make it exceptional. In other campaigns for human rights, he writes, "scholars have found a basic ideational core around which all the beliefs in the movement can be organized and understood." Yet moral traditionalism and religious ardor coexisted quite easily with liberal reform in the abolitionist and civil rights movements in America and the Solidarity Movement in Poland. Why then should we be so surprised when we find the same mixture in the pro-life movement? Or did these other Christian movements suffer from a lack of coherence as well?

Had Munson fully appreciated just how devastating his own findings are to canonical sociological treatments of the abortion conflict, especially Kristin Luker's Abortion and the Politics of Motherhood, he might have asked a different question. Why have Luker and her many academic admirers so readily accepted the view that the pro-life movement is driven by a defense of traditional gender roles despite so much counterevidence? Answering that question would require deeper reflection on the sociology of sociology departments. It may be that sociologists are generally reluctant to entertain the possibility that such religious reactionaries might be agents in progressive history. As strong supporters and even participants in the pro-choice movement, they cling to the notion that while they care about human rights, their opponents are consumed with crabbed cultural anxieties over the decline of traditional male power and female domesticity. If this is right, most sociological treatments of the pro-life movement may tell us more about the contemporary American Left than about their ostensible subject, the right-to-life movement.

None of these criticisms, however, should detract from our appreciation of what a fine book Ziad Munson has written. The Making of Pro-Life Activists is not only one of the most serious and balanced books on the right-to-life movement, it also illuminates the dynamics of social-movement mobilization well beyond the abortion controversy. Perhaps it will even help demolish the bad sociology Munson reluctantly challenges.

Jon A. Shields is assistant professor of government at Claremont McKenna College and author of The Democratic Virtues of the Christian Right (Princeton Univ. Press).