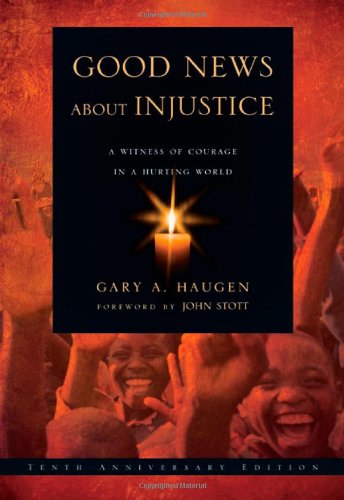 When it comes to talking about justice, the whole evangelical landscape is different today, Gary Haugen says. Looking back to the mid-1990s, when IJM was being dreamt up, Haugen recalls, "there was no teaching on this. I'd heard thousands of sermons by then in my Christian life and not one on justice. There were no books. Can you imagine how impoverished our faith would be with no books on love? On evangelism? On marriage? No one was telling the stories of Christians doing the work of justice—except for William Wilberforce's story, which was a hundred and fifty years ago." That gap motivated Haugen to write Good News About Injustice, his first book, which IVP released in a 10th anniversary edition last fall.

Today, Haugen asserts, "the obstacles of going into the church and speaking about injustice have been almost entirely removed from mainstream evangelicalism." God has a plan for fighting injustice in the world, Haugen often says, and "it's us." That message has resonated, and he is excited that "there's a whole generation of young Christians for whom the Gospel in the absence of justice is just not interesting or compelling or tolerable."

Haugen laughingly remembers having merely a handful of students at his workshop at the massive triennial student conference, Urbana 2000. Now, IJM can't keep pace with its speaking invitations. Haugen has been on the platform at mega-events like the Willow Creek Leadership Summit and the Catalyst Conference. Rick Warren plugs Haugen's books in his pastors.com newsletter. Prominent Christian musicians are producing a CD to raise money for IJM. Campus Crusade's national leadership has invited senior staff from IJM to equip them for justice mission and has plans to second a staff member to IJM to foster a deep partnership. Youth with a Mission's Discipleship Training Schools now give a prominent place to biblical teaching on justice. IJM was one of the most frequently named organizations from the stage at Urbana 2009, and over 250 colleges nationwide boast IJM student chapters. The agency's work has been featured in every major Christian media outlet (and a host of secular ones, including CNN, the New York Times, the Washington Post, The New Yorker, Forbes, and Oprah). IJM interns reviewing a decade's worth of back issues from Christianity Today found a 500 percent increase in the number of articles devoted to violent injustice. As Haugen puts it, a "sea change" has occurred.

Today, more than 250 nonprofit organizations in the United States are focused on the problem of human trafficking. Nearly 60 percent are faith-based—and a significant proportion of these are evangelical. Fifty have some kind of affiliation with IJM. These groups do everything from raising awareness to providing aftercare for victims. Denominations like the Salvation Army and the Evangelical Covenant Church sponsor church-wide initiatives and campaigns (launched in 2006 and 2007, respectively). In 2008, the World Evangelical Alliance appointed a fulltime spokesperson on trafficking issues. More trafficking occurs in Texas than anywhere else nationally, and within the Lone Star State, Houston is the hottest site. The local Rescue and Restore Coalition there is one of the country's most active, and 33 of its 69 endorsers are churches.

Crossroads Church in Cincinnati may be the best example nationwide of a church committed to the fight against human trafficking. Their journey began when then-teaching pastor Brian Wells read Haugen's Good News About Injustice in 2005. He'd seen Dateline NBC's report on IJM's work freeing children in forced prostitution in Cambodia and then heard of the book through Rick Warren's e-newsletter. "Our teaching team takes study leave in the summer to recharge, catch up on all that reading that piles up," Wells says. "Reading Good News About Injustice really challenged me." He'd digest Haugen's interpretation of a text, then check the verses in his Bible. "I'd read it in context and I'd be like, 'That point he's making—it's exactly right!' " Wells recalls. "How come I've never stopped and really read that before?"

"It really messed with me," he admits. "I came back from that experience and met with some of our leaders at Crossroads. And I said, 'You know, I just want to confess, I've been preaching an incomplete Gospel.'"

Crossroads leadership felt God was saying something to the church through Wells. When he indicated a desire to meet with Haugen in Washington, they sent him off with a $25,000 check to IJM. "I told Gary personally, 'I believe you are a prophet. You've given the church a word that we need to hear,'" Wells says. "'Now how can we help without getting in the way?'"