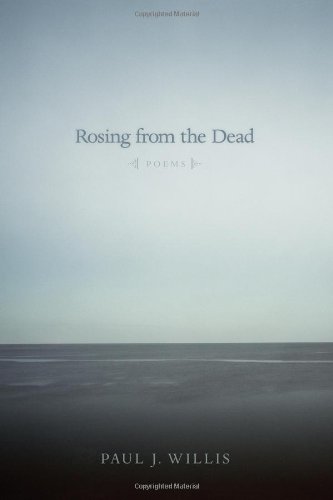 Rosing from the Dead

Paul Willis, whose name you'll recognize if you have been reading this magazine for a while, has a new collection of poems, just published by WordFarm: Rosing from the Dead. (Two of the poems in this volume first appeared in Books & Culture, and the title poem was published here after first appearing in Christianity and Literature.) The first poem in the book, "When You Say," begins by listening, at once attentively and with a certain ironic distance, to the way we talk:

When you say
my name has come up
several times, I hear it
gasp, emerging hopelessly
for air, then
sinking into voiceless ocean.

This first stanza is funny, self-deprecating, and comfortably mundane, taking a stock phrase literally and playing with it, the way many cartoons in The New Yorker do. A familiar scenario is implicit here. The "you" is a generalized figure, a superior of some kind, we might suppose. But the second stanza departs from the mundane:

When you say my
name reminds you of certain tactile
peculiarities, husks of corn or a lost
thread of glass beads, I see it caught
between your palms like a stray moth,
murdered by your chance applause.

Instead of taking as its point of departure a familiar scenario from the world outside the poem, the second stanza takes as its point of departure the first stanza, playing a mildly surreal variation on it. As many poems do, "When You Say" is teaching us how to read it. This stanza is a reminder of the self-contained nature of the poem. The valence of the "you" is more personal than it was in the first stanza, but the tone is detached, and the image of the speaker's name—"like a stray moth, / murdered by your chance applause"—is self-consciously absurd. The murder is bloodless.

Some readers will be tempted to stop at this point. But hang on. The next stanza, while offering another variation on the first, also changes direction yet again: