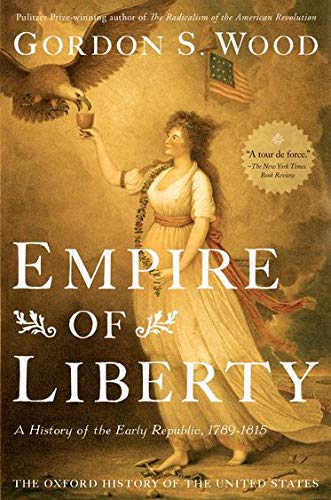 Howe's triumph was to show how what happened in non-political spheres was often as important for understanding the course of American experience as were political developments. Thus, Howe builds the experience of women into the fabric of his broad narrative, but for Wood, women appear only when a few notable voices are being influenced by republican principles to speak out for women's rights. Other female activities that were not so directly inspired by republican politics, such as explored by Catherine Brekus (Strangers and Pilgrims: Female Preaching in America,1740-1845, 1998) are absent, despite their manifest importance. Similarly, the frontier West comes into play for Wood mostly when its people or problems impinge on national leaders and their concerns. Yet compelling arguments by scholars like Alan Taylor (The Divided Ground: Indians, Settlers, and the Northern Borderland of the American Revolution, 2006) and Patrick Griffin (American Leviathan: Empire, Nation, and Revolutionary Frontier, 2007) have shown how often violent frontier experience substantially shaped the era's concepts of citizenship, understandings of race, and practices of rough-hewn democracy. Because this western angle of vision is not present in Wood's book, it suffers as a comprehensive picture of United States history.

Closely related to issues of scope are questions about causes and effects. They concern what Wood sees as the construction of society in the new American nation. For his picture, not just the most important factor, but virtually the all-comprehending factor, in American historical development was the run-on effect of the Revolution. Wood's brilliance in describing American "liberty" includes his ability to show how from the 1780s, the concept took on a more individualistic, democratic, and populist character than it conveyed before the Revolution. In conflict with Britain, liberty had meant the kind of freedom from corrupted and concentrated authority that would allow self-sufficient gentlemen to act virtuously for the public good. Increasingly, amidst conflict aimed at defining the American future, liberty came to mean the kind of freedom from any centralized authority that allowed almost all white men to pursue virtue as they themselves defined it. In this process, deference—which the major Founding Fathers had assumed would come to themselves as if by nature—collapsed as an organizing social principle. Increasingly it was not deference but self-assertion, not tradition but contract, not learning but the market, not stability through the suppression of faction but balance through the competition of factions that defined an American way of life.

In this interpretation, developments in other spheres were, of course, not unimportant—economy, demography, gender, religion, disease, commerce, learning—but none of them are allowed to crowd out republican political ideology as the driving force. The problem with this unilinear rendering is not its presentation of political ideology but rather the all-encompassing role given to the extrapolation of political ideology for explaining social change. As one of the most important spheres to highlight strengths and weaknesses of this general interpretation, religion serves unusually well.[2]

At several places in Empire of Liberty, Wood describes religion in this period as being defined, driven, or caused by the expanding logic of Revolutionary liberty. Thus, "As American society became more democratic …, middling people rose to dominance and brought their religiosity with them." Or, in the baldest expression, "The Revolution released torrents of popular religiosity and passion into American life."

Such statements are subtly misleading. As Daniel Walker Howe once pointed out, there was indeed a great surge of evangelical religion in the post-Revolutionary period, and that surge certainly did relate to Revolutionary events. But taken no further, the story is incomplete. The religious surge in the early republic, suggests Howe, resulted from a number of factors, not all of them political and not all of them rooted in the Revolution: "the Puritan/evangelical tradition did not simply adapt to, or borrow from, modernity and democracy; it actively helped form them. Individualism, voluntarism, and contractualism were features of the Puritan/evangelical religious tradition before they were taken over by the secular political philosophers of possessive individualism."[3]

Using Howe's insight, it is possible to observe how Wood, with political ideology highlighted as the primary force behind religious development, shortchanges the agency of some of the era's primary religious actors. Methodism, for example, was in this period an engine for revival, reform, renewal, and social cohesion of nearly incalculable force. And Wood does record the dimensions of Methodist advance: from no adherents in 1760 to 700 churches in 1790 to more than a million adherents in 1820. Of course Methodism did not expand in a vacuum, but in fact took full advantage of the space opened up by the Revolution's stress on freedom. Yet Methodism enjoyed a dynamism of its own that cannot be explained in primarily political terms. Its Arminian theology stressed human freedom, but of a quite different sort from the American political variety. Its evangelistic strategies certainly did empower ordinary people, black as well as white, women as well as men, but with an energy that paralleled, rather than grew out of, the workings of republican ideology.