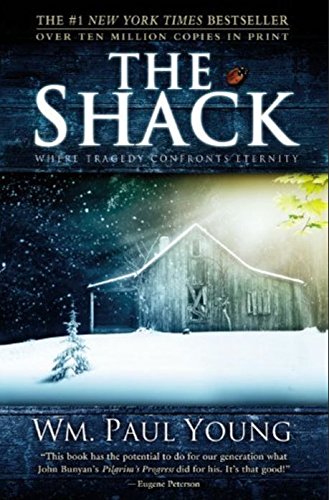 Situating The Shack in a Christian literary landscape.

In his mega-bestseller The Shack, William Paul Young offers a postmodern, post-biblical theodicy, explaining the ways of God to his readers. Whether it is also post-Christian is very much in the eye of the beholder, and may depend on how fluid one's definition of "Christian" is.[1] I will return to that question later. "Post-biblical" is itself a strong term. But The Shack is, I think, not accidentally but self-consciously post-biblical, a quality that contributes to its broad popularity.

First and foremost I want to consider the novel literarily. This may be especially salutary in light of Eugene Peterson's oft-quoted comparison of The Shack to Pilgrim's Progress.[2] But a literary approach also takes us past a mere laundry-list of the book's arguably heretical assertions (to which fans typically respond, "But it's just a Novel!") to discussion of context. In what ways does The Shack fit into the tradition of Christian fiction—especially under the headings "theophany" and "theodicy"—and in what ways is it, in fact, sui generis?

Young was an unpublished writer when, in 2005, he sent to several acquaintances a draft manuscript of a story "carved out of the caves of my experience." This "experience," including an emotionally strained relationship with missionary parents and sexual abuse at boarding school—hinted at in the book and subsequently elaborated—is foundational to the story's emotional register. Young's first readers, seeing marketable potential, became collaborators and, in effect, co-authors. The published version of The Shack owes much to their artistic shaping, including, one assumes, several concentric frames around the book's literary centerpiece: a life-transforming encounter of a broken man—the novel's protagonist, Mack—with God ("Papa," curiously cast as a winsome cross between Maya Angelou and Aunt Jemima; "Jesus," an unattractive but likeable Jewish handyman; and "Sarayu," a small Asian woman, "keeper of gardens" and ...