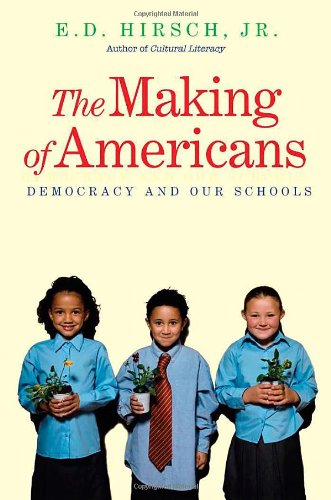 In Defense of a Common Culture

Back to the fray with E.D. Hirsch.

E.D. Hirsch is a great American, a scholar who cares deeply about the youth of this country, what they are taught, and how likely they are to become engaged and thoughtful citizens. Hirsch describes himself as having enjoyed a "comfortable life as a conference-going literary theorist" before realizing that the failure of American schools to offer students actual content rather than faddish pedagogical innovations was not only turning young people into cultural illiterates but also was preventing those at the bottom of the ladder from improving their prospects in life through education. The founder of the Core Knowledge Foundation and the author of the controversial Cultural Literacy: What Every American Needs to Know (1987), Hirsch was adopted by the Right early in the culture wars. But his actual political sympathies are more in line with Albert Shanker, the longterm leader of the New York City teacher's union (to whose memory the present book is dedicated).

Hirsch's new book is called The Making of Americans, and while he describes it as both departing from and building upon his previous work, it does more of the latter than the former. Disappointingly there is little new to be learned; anyone who has already read Diane Ravich's Left Back will not glean more history and, indeed, anyone who has read Hirsch's previous books will pretty much know the contours of the argument. Still this book is valuable because it offers a clearly written, highly accessible, and brief statement of the issues that have guided Hirsch for the past two or three decades.

Reading William Bennett from the Right or almost any product of a major school of education from the Left, one could be forgiven for thinking that the American school wars were a battle between progressive educators seeking to teach students about the wonders of race, ethnicity, and gender on the one hand and old-fashioned disciplinarians worried about the seductions of relativism and hedonism on the other. The most important contribution Hirsch makes to the way we think about educating our youth is to get us out of using terms such as Left and Right. All wars eventually end, even culture wars. It is time to take the ideology out of our educational battles, a task for which E.D. Hirsch is particularly suited.

One example of the way Hirsch does this is offered by his discussion of school choice, whose advocates seek to replicate the market by relying on vouchers or building charter schools. That school choice was advanced by libertarian economists such as Milton Friedman and has been adopted by many Republicans suggests that conservatives favor it. And that public school teachers who routinely vote Democratic by overwhelming margins have resolutely opposed it implies that liberals view school choice with the same hostility they view unregulated capitalism or any other policy prescription guided by free market principles.

Hirsch's perspective is different. School choice by its very nature militates against one of his major recommendations: the adoption of a common curriculum that all students must learn. Libertarianism, his analysis reminds us, is not the same as conservatism. Unquestioning reliance on the free market puts the individual and his or her immediate desires at the center of the moral universe, not unlike the cultural and moral liberationism celebrated during the 1960s. If the New Left was particularistic rather than universalistic, so are advocates of school choice. By contrast, Hirsch argues that we need more common space and not the invasion of the schools by consumer culture.

Although it plays less of a role in his book than school choice, another way in which arguments over the schools do not easily correspond to familiar ideological categories ought to be of special interest to readers of Books & Culture. Our culture wars are often portrayed as battles between secularism on the Left and religion on the Right. In this reading, those who insist that teachers be able to discipline their students or who emphasize the eternal verities handed down from generation to generation are viewed as people of faith. Opposing them are the secular humanists who want to take God out of the schools and insist that every student's personal need for authenticity and identity be recognized.

In fact, however, a substantial portion of the Christian subculture in the United States approaches education in ways similar to the school choice movement. Most prominent are those committed to homeschooling; however successful homeschooled children may turn out to be in life, they rarely if ever get to participate in the common culture that public schools at their best represent. Even if their parents choose for them a more traditional curriculum emphasizing classic texts, including of course the Bible, a choice is still being made. The common culture of the United States includes both religious and secular ideas. Those exposed to only half are only getting half.

Rather than homeschooling their children, many religious parents will send them to religious schools. But such schools, once again, are not part and parcel of the common culture. Even if they are not narrowly sectarian, they still teach from a particular point of view. In doing so, their insistence on Christian or religious ways of knowing borrows from advocates of identity politics in the secular realm who insist that women or racial minorities have voices that must be heard in a multicultural curriculum. I for one do not believe that there would have been a religious revival in the 1980s without the countercultural revival of the 1960s as a model. If our common culture is fractured, religious communities must share the blame.

Just as many religious Americans rely on a secular notion such as choice, so many progressives become religious in their zeal. Hirsch characterizes those progressives who question traditional pedagogy as an "anti-curricular movement," and he writes that this movement's "sense of righteousness, of being in possession of ethical rectitude and privileged truth often has a religious flavor." Those on the Left side of the school wars debate can trace their intellectual heritage back to Rousseau and the romantic movement. Let students learn the right technique and providentially students will grasp what they need to know—or so runs the theory. In practice, educational reformers frequently become otherworldly, replacing an insistence on fact and measurement with hope for a better tomorrow.

The truth is that Americans of all persuasions need more factual knowledge. The cause of religion is not well served by religious illiteracy; good citizenship requires a solid ground in history and politics. The rigorous education Hirsch champions—and his unapologetic insistence on common American values—would be as suspect to a self-styled populist like Sarah Palin as they would be to a new age therapist. I wish Hirsch's book would be taken seriously among Pentecostals and megachurch enthusiasts, people who in general set a higher priority on the power of the spirit than the life of the mind. I doubt that it will be.

We have many different religions but only one country. It is perfectly appropriate that people of one particular faith verse themselves only in their own tradition, although one hopes they'll show the curiosity to learn about others as well. The problem in our religious life is not that Christians need to know more about Muslims; it is that Christians know too little about themselves.

When it comes to schools, by contrast, anyone who would use them to promote only their ideas and the wisdom of their own faith would be seriously out of bounds. Many religious parents think our schools all too often ignore religion and in that they are correct; to leave religion out of our common experience as Americans is to shrink the meaning of Americanism. But having said that, it is also true that the schools must teach all facets of our common life, not only those shaped by one tradition. If we are religiously pluralistic, we are, or we should be, more politically united. As people of faith, religious Americans are entitled to have their voices heard. As Americans, they are obligated to hear the voices of others.

E.D. Hirsch is an antidote to our culture wars, our polarization, our taste for demagoguery, our feel-goodism. Reading him always reminds me of this country's great potential. That is what makes him such a great American.

Alan Wolfe is director of the Boisi Center for Religion and American Public Life at Boston College.