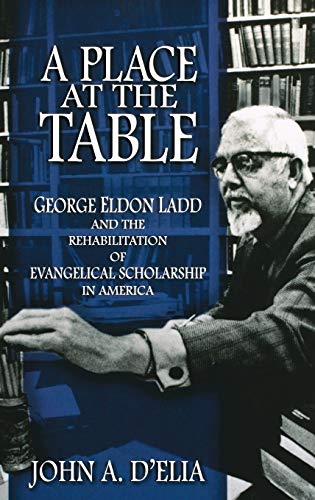 A Place at the Table: George Eldon Ladd and the Rehabilitation of Evangelical Scholarship in America
John A. D'Elia
Oxford University Press, 2008
304 pp., 66.00

Present and Not Yet

I have vivid memories of the 1947 Gordon Divinity School faculty family Christmas party. My missionary father, on extended health leave as he recovered from four years as a pow in China, was filling in for Paul King Jewett, then completing doctoral studies at Basle. That day as the children gathered for party games played out incongruously in the parlor of the Brookline mansion that was the home to the seminary, I was aware of a dark and brooding presence in a corner. Father of a boy not much older than I, he did not seem to be having much fun. Turns out, according to John D'Elia's biography, that Professor George Eldon Ladd (1911-1982) never did have much fun.

A Place at the Table: George Eldon Ladd and the Rehabilitation of Evangelical Scholarship in America is a gripping account of a man who was an integral part of the renaissance of postwar evangelical scholarship. That rebirth was accomplished, as is becoming evident from an increasing number of "tell-all" accounts, at great personal cost. (Whatever happened to fundamentalist hagiography?) Rudolph Nelson's 1987 classic The Making and Unmaking of an Evangelical Mind: The Case of Edward Carnell comes to mind. Edward John Carnell, Ladd's colleague and erstwhile boss at Fuller Seminary, likewise self-immolated. What was it about these men that drove them on in such intense psychic journeys?

The title of Ladd's biography answers the question: for his obsessive commitment to establishing his place at the table of scholarly and academic discourse, George Eldon Ladd paid a high price. D'Elia, senior pastor at the American Church in London, is to be commended for patient and well-documented research (the book began as a doctoral thesis with David Bebbington at Stirling). It is a story that needed to be told, though one hopes Ladd's deserved reputation will not be obscured by details of his tempestuous personal struggles, now fully disclosed.

Today, as D'Elia notes, no fewer than six George Eldon Ladd titles are still in print. ...