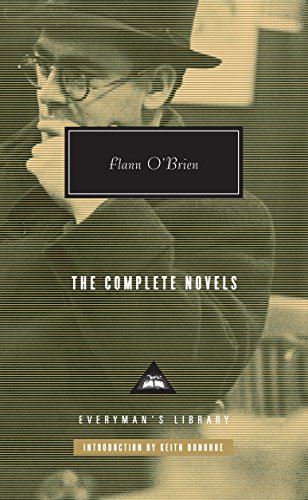 Flann O'Brien was one of the funniest writers who ever put pen to paper. Yes, he set the English novel ablaze with experimental fireworks that still dazzle. He was a brilliant linguist, who wrote Irish and Latin with witty fluency. He was a gifted playwright, who, if the Abbey and the Gate had been more receptive, might have gone on to rival O'Casey and Shaw. He was a legendary drinker whose great dictum—"A pint of plain is your only man"—has become the motto of the drinking classes around the world. He was an uncompromising satirist who subjected the pretensions and idiocies of his Irish compatriots to daily mockery in an incomparable Irish Times column. Yet more than anything else he was sublimely funny.

The Everyman's Library edition of the complete novels should gain many new readers for the work of an author who is still not as well known as he deserves to be. Born in Strabane, County Tyrone in 1911, the fifth of twelve children, Brian O'Nolan studied English, Irish, and German at University College Dublin before joining the Irish Civil service in 1935 where he was Private Secretary to successive Ministers for Local Government until 1953. In 1940, under the pseudonym Myles na Gopaleen, he began his famous column for the Irish Times, "Cruiskeen Lawn," which, translated back from the Irish, means "The Little Brimming Jug." His five novels—for this purpose he was Flann O'Brien—included At-Swim-Two-Birds (1939), which Graham Greene persuaded Longman to publish; The Third Policeman (1940), which Longman rejected (it wasn't published until 1967); The Poor Mouth (1941), which was originally written in Irish as An Béal Bocht; The Hard Life (1961); and The Dalkey Archive (1964). He died in 1966.

Flann O'Brien is often paired with Joyce. Both were masters of English prose, both looked askance at the pretensions of Irish nationalism (Joyce insisted on keeping his British passport, not only after the founding of the Irish Free State in 1922 but ...