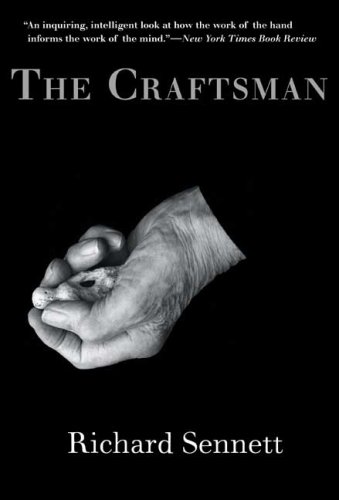 Thinking with Your Hands

The implications of craftsmanship.

I was reading The Craftsman, by the distinguished sociologist Richard Sennett, when then President-elect Barack Obama was selecting persons for his cabinet. The universal response of the media to the cabinet appointments was that Obama was selecting pragmatists rather than ideologues. Sennett's book led me to see that Obama was picking craftsmen—people who believe that there is such a thing as governing well and who are both capable of doing so and committed. Whatever the philosophy of governance of the preceding administration, certainly it was not this. The members of the administration did not think of governance as a craft that they were called to practice.

Sennett opens his book with a little story explaining his motivation in writing it. Just after the Cuban missile crisis he ran into his teacher, the German philosopher Hannah Arendt, on the street in New York City. So intent was Arendt on making sure her student drew the right lesson from the crisis that she was oblivious to the freezing cold weather. The lesson was that "people who make things usually don't understand what they are doing."

This was by no means a momentary and isolated conviction on Arendt's part; it was the application to the topic at hand of her philosophical framework. Animal laborans is the laboring human being, engaged in the task of making something; he shuts out everything that does not pertain to the task as hand. Homo faber is men and women making a life together. Animal laborans is fixated on the question "How?" Homo faber asks "Why?" Thus homo faber is not the colleague of animal laborans but its superior, standing above as guide and critic. For Arendt, thinking comes after making, politics transcends labor.

The Craftsman is dedicated to the thesis that this picture of making is mistaken. "Thinking and feeling are contained within the process of making," Sennett writes. We need a "fuller, better understanding of the process by which people go about producing things, a more materialistic ...