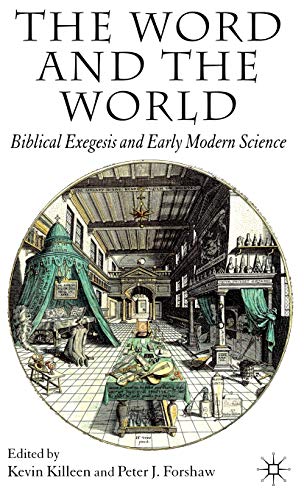 The Word and the World: Biblical Exegesis and Early Modern Science

Did Protestant biblical exegesis play a vital role in the formation of modern science?
July/August 2009

Editor's Note: This piece first appeared in the July/August 2009 issue of Books & Culture. We could wish that many participants in the "religion-science" debate had read it and taken it to heart. But there's still time to do so.

Once upon a time the Catholic Church dominated every area of life, particularly the life of the mind. Free thought was suppressed, and the West's precious Greek heritage was rejected. Miraculous explanations for natural events were routinely invoked, and belief in a flat earth was universal. However, in the 16th and 17th centuries, a few plucky thinkers like Copernicus, Galileo, and Bacon threw off the chains of church hierarchy and scripturalism to offer bold new interpretations of the cosmos. Thus modern science was born. While medieval theories about nature were often circular and religiously biased, the new discipline relied solely on impartial experimentation and inductive logic.

What I have rehearsed here is, of course, a reductive and erroneous version of one of Western culture's most influential narratives, that of the so-called Scientific Revolution. Though this version may continue to dominate the popular mind, 20th-century historians of science have disputed many of its claims. For example, Thomas Kuhn famously argued that throughout history scientists have been predisposed to interpret data in various ways—to see some things and miss others—according to paradigms that influence them, usually unconsciously. Similarly, Michael Polanyi contended that even the most rigorous scientific knowledge involves a substantial element of belief, and demonstrated that scientists are often motivated as well by seemingly non-scientific notions like elegance and beauty. Jeffrey Russell has made the case that virtually no one, either in antiquity or in the Middle Ages, believed in a flat Earth. (Washington Irving, creator of Rip Van Winkle and Sleepy Hollow, invented the error and read it back into Columbus' audience with Queen Isabella.) And Stanley Jaki has demonstrated that the Scientific Revolution may in fact be better viewed as an evolution, pointing out that Copernicus and Newton had important—though seldom acknowledged—medieval predecessors, most notably Jean Buridan, Nicholas Oresme, and Nicholas of Cusa, all of them churchmen.

The Word and the World, a splendid collection of essays, sheds light on these matters, approaching the religion-science debate in a fresh, even startling way. Rather than considering how religion in general may have nurtured or hampered the rise of science, this book examines the role of biblical exegesis in the formation of the early scientific method. Featuring twelve essays by a variety of American, English, German, and Swedish thinkers—two teach at Catholic universities, the other ten at secular institutions—The Word and the World is organized around the provocative thesis that the new science and biblical interpretation, "far from being implacable enemies … seem to have been inextricably intertwined." The opening essay is by Peter Harrison, whose seminal 1999 book The Bible, Protestantism, and the Rise of Natural Science argued that "the Protestant call for a return to literal interpretation provided the intellectual conditions and the hermeneutic mode conducive to the development of science." By eschewing the elaborate, often abstract modes of allegory common in Roman Catholic discourse, Protestantism fostered a kind of scientific consciousness, one given to reading God's other book, nature, as attentively as it did the Bible.

At this point some readers might object that while general arguments for the consilience of science and religion are all very well, arguing that biblical literalism nurtured early science means turning a blind eye to history. Didn't the church try to suppress the emerging discipline on the basis of obstinately literal interpretations of passages such as Joshua 10, in which the sun supposedly stands still for a day, and Ecclesiastes 1:5, which claims that "the sun also rises, and the sun goes down"? One strength of The Word and the World is that it anticipates such objections. Indeed, not only is it an anthology, it is also a dialogue of sorts, with each contributor responding to Harrison, some extending his thesis, others refining it, still others contesting it. For instance, several essays point out that close readings of Scripture were not the sole province of Protestant commentators. One counter-example is the humanist Cornelius Valerius (1512-78), a Latin professor at the University of Louvain (Belgium) and a compiler of scientific textbooks. Irving Keltner argues that Valerius practiced a "Mosaic cosmology" based on a literal reading of Genesis and other biblical texts, which led Valerius to dispute key principles of Greek astronomy, including aether, the universe's eternal nature, the hardness and incorruptibility of the heavens, and a fifth ("quint") essence in space. Regarding the quintessence, Valerius maintained that Genesis assumes that earth and sky are composed of one substance, not five. And as for the allegedly eternal universe, he adduced Isaiah 51:6: "The heavens shall vanish like smoke,and the earth shall be worn away like a garment." Nonetheless, Valerius' literalism was double-edged and did not always lead to scientifically sound conclusions. For instance, it caused him to regard Ecclesiastes 1:5 as convincing evidence against heliocentrism.

Some of the collection's strongest essays complicate Harrison's treatment of the literal. Among these is Peter Forshaw's discussion of the Lutheran alchemist Heinrich Khunrath (1560-1605). In a sense Khunrath was the ultimate literalist, offering radically material readings of the Genesis creation account. For instance, he figures God as a proto-alchemist, working in a kind of cosmic laboratory, and creating heavens which presage "the spirit of the alchemical quintessence … the Spirit, Water and Fire that the [alchemists] reveal in their laboratories." Paradoxically, however, Khunrath's exegesis is also highly symbolic, and teems with references to Hermes Trismegistus, Moses (who is for him the ultimate kabbalist), the ancient philosophers, and other alchemical discourse. Furthermore, he presents a lengthy argument on how Jesus parallels the Philosopher's Stone. Reading Khunrath's multi-layered, arcane texts is thus a dizzying affair, and suggests that the understanding of the literal in early modernity was quite multi-faceted.

James Fleming challenges Harrison's characterization of the literal as a trans-historical category that functions as a pre-condition for science. In a dense but rewarding account,Fleming contends that the very notion of literalism is itself a hermeneutical construct, one that arose simultaneously with the new science. Fundamental to his essay is the concept of "intensional literalism," a method that allows one to interpret not merely according to the meaning of the words of an utterance, but also by the speaker's intent—which may sometimes be the opposite of the utterance's grammatical and syntactical meaning. This sort of exegesis allowed Galileo and other early modern Copernicans to account for biblical texts that would seem to contradict their claims. Fleming shows that early modern theologians also practiced this kind of literalism. The rub, of course, was how to determine intent. One solution to potential hermeneutic anarchy was the formation of what Stanley Fish calls interpretive communities, that is, authoritative bodies that adjudicated conflicting readings. For centuries, the Catholic Church had functioned as such a community, yet strikingly, even though Galileo ran afoul of this body, he and other Copernicans nonetheless invoked interpretive communities when presenting their work to the public: Copernicus himself, along with Kepler, situated his findings in a Pythagorean tradition, while Galileo adduced speculations on geomotivity by Augustine, the Bishop of Avila, and other church authorities.

Other essays in The Word and The World engage similar themes. Paul Muller considers the role interpretive communities played in relation to the new science, particularly the scholarly community that dealt with manuscripts of ancient texts, and offers an intriguing analogy: Many of the practices utilized by 17th-century natural philosophers to decide between conflicting experimental results were based on very similar techniques deployed by textual critics to deal with divergent manuscripts of the Bible and other incunabulae. Also noteworthy is the essay by Hakan Hakansson, which surveys the surprisingly large role biblical prophecy and astrology played in the career of famed astronomer Tycho Brahe, generally regarded as a paragon of clear-sighted empiricism, and Jonathan Sawday's absorbing study of how the Babel narrative persisted well into the 18th century, a narrative that functioned not as we might expect, as a cautionary tale, but rather, as a story that frequently inspired technological innovation.

While reading The Word and the World, I found myself wondering how Peter Harrison would reply to some of his critics, though I realize that including his response would have enlarged an already sizeable book. I also question one of the claims in the book's introduction: "Literal interpretation of the Bible is an affront to any modern scientific procedure." I suspect that what's being referred to here are strict creationist readings of the Genesis account. However, while most modern scientists would dismiss the notion of a young Earth, and many would reject the claim that God created the world, don't they agree, at least implicitly, with the Bible's frequent—and frequently literal—statements about the order, regularity, and stability of nature? Indeed, absent such a belief science would seem to be impossible. These quibbles aside, The Word and the World more than succeeds in its stated goal: To show that in the early modern period "natural philosophy [was] characterized by its willingness and desire to marry scripturalism with its study of the natural world."

Timothy J. Burbery, professor of English at Marshall University, is the author of Milton the Dramatist (Duquesne Univ. Press, 2007).