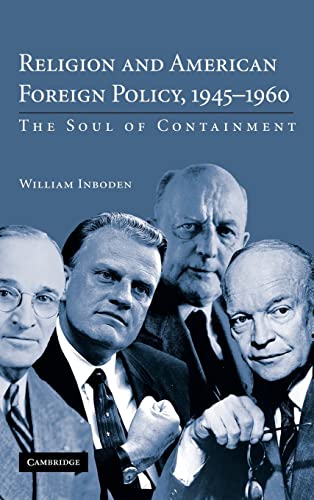 Religion and U.S. foreign policy in the first phase of the Cold War.
July/August 2009

Renewed debate over the direction of U.S. foreign policy has focused on several contending schools of political thought: Wilsonian idealists, Kissinger realists, liberal interventionists, and the neo-conservatives. Though the debate is important in that it takes big ideas seriously, there is a hollow quality to much of it: a remarkable inattention to the role of religious belief in the formation and execution of public policy.

This problem has become institutionalized in our foreign policy enclaves. In college classrooms, textbooks such as American Foreign Policy Since World War II somehow manage to discuss the Cold War without mentioning the stark religious divide between atheistic communism and the American democratic creed. Henry Kissinger, the quintessential Cold War realist, produced an 800-page tome, Diplomacy, that fails to reference religion in its index. The U.S. State Department still functions largely as though the First Amendment precluded the promotion of America's greatest contribution to democratic government, namely, freedom of conscience and religion. It's as if the great forces moving the hearts of men and nations were indifferent to their deepest appetites and aspirations.

With the publication of William Inboden's Religion and American Foreign Policy, 1945-1960: The Soul of Containment, the conventional, secular approach to political science and public policy seems conspicuously deficient. We learn, for example, that in early 1951 the State Department held a two-day conference with Protestant theologian Reinhold Niebuhr and other national figures to help the United States develop an "ideological offensive against international communism." This was the era of the Truman doctrine, the U.S. policy to contain Soviet communism, and the administration understood that a political theology defined the conflict between the two superpowers. That meant the government needed all hands on deck—yes, even the hands of ministers and theologians, of whatever faith. "I share your apprehension over the threat to Christian civilization," Truman wrote to Pope Pius XII in an effort to court domestic Catholic support for his policies. "All who cherish Christian and democratic institutions should unite against the common enemy. That enemy is the Soviet Union, which would substitute the Marxist doctrine of atheistic communism for Revelation." The president went on to describe his Marshall Plan, the U.S. program to rescue postwar Europe from economic ruin, in frankly religious terms.

Part of what makes Inboden's book so necessary and so rewarding (full disclosure: the author is a friend) is that he combines the skills of an intellectual historian with a practitioner's awareness of the limits of converting ideas into policies. After getting his PhD in history from Yale, Inboden served in the State Department in the Office of International Religious Freedom and then held a senior post on the National Security Council in the Bush White House. Such sobering experiences might have produced a work that was cynical or hostile to faith. Instead, the author treats religion on its own terms—intelligently, even sympathetically, but without illusions about its capacity for mischief.

This scholarly approach is especially important for the period under consideration, the early phase of the Cold War. For it was the Truman Administration, Inboden says, that designed a "systematic effort by the U.S. government to employ religion as an ideological weapon in the effort to contain Soviet communism." That program continued, unabated, under Dwight D. Eisenhower, despite his personal disdain for his predecessor. What they shared, it seems, was a set of convictions about the bedrock importance of religion to American democracy: the biblical roots of human rights, the spiritual (not merely political) evil of atheistic communism, and the divine mission of America in the world.

There are dangers, of course, when political leaders hold some of these ideas. There is the temptation to superpower hubris. There's the potential idolatry of America's "civil religion," in which democratic values and symbols are invested with religious significance. Some readers may wish Inboden were more zealous in exposing these features of U.S. domestic and foreign policy. Other authors have taken up that task—Kevin Phillips in American Theocracy, for example—but too often their personal animosities have produced dark, contorted, and ultimately unconvincing narratives.

Inboden has a different objective in mind: a desire to explain how religion functioned as both a cause and an instrument in the Cold War. Much has been written to interpret why the United States, so soon after the cataclysm of World War II, was prepared to expend blood and treasure to resist the expansion of Soviet communism. Historians and political scientists tend to round up the usual suspects: the struggle for global hegemony, a lust for economic dominance, the "psychological need" for an enemy to destroy. When scholars acknowledge the role of religion, it often arrives in the form of a shallow, "America as crusader nation" critique.

It is here that Religion and American Foreign Policy makes its immensely important contribution. Inboden, himself a person of Christian faith, delivers a nuanced and judicious look at the religious ideals and motivations of the period's cast of characters. His narrative adds depth to familiar figures and introduces us to others not as well known but nonetheless important in the overall story. We learn about Dr. Walter Judd, for example, a medical missionary and leading voice in the Congress on U.S.-China relations in the 1940s and 1950s. Few Americans had his personal knowledge of the "utterly ruthless" nature of Chinese communism, an insight that was sadly vindicated by agricultural policies that killed tens of millions of peasants in the largest man-made famine in human history.

Thanks to Inboden's research into recently declassified documents, we also learn more about the Eisenhower Administration's outreach to a potential ally in the Cold War—the Muslim world. In an effort to counter Soviet influence in the Middle East, Eisenhower held unprecedented meetings with Muslim leaders. He launched a series of diplomatic overtures, emphasizing the religious values shared by the United States and the Islamic community. He ordered the National Security Council to mobilize "spiritual and material resources"—including Voice of America broadcasts in Arabic as well as covert economic assistance—to help those fighting against tyranny. Eisenhower's results in the Middle East, of course, were decidedly mixed. The cia's help in overthrowing Iranian premier Mohammed Mossaddeq—and replacing him with Shah Mohammad Reza Pahlavi—arguably held back the Communist tide, but it brought to power a thuggish and unpopular regime that helped set the stage for the Iranian Revolution twenty-five years later.

In Religion and American Foreign Policy, we are reminded that the political leaders who took America into a long, costly, and ultimately successful struggle against the Soviet Union did not do so primarily because of "power politics." They did so because they feared, quite reasonably, that the triumph of atheistic communism would mean the wreckage not only of human rights but also of human souls. "Without this theological context," Inboden writes, "the Cold War cannot be understood." His book validates that judgment, one that the contemporary foreign policy establishment, facing a new ideological threat, would do well to heed.

Joseph Loconte is a senior research fellow at the King's College in New York City and the editor of The End of Illusions: Religious Leaders Confront Hitler's Gathering Storm (Rowman & Littlefield).

Copyright © 2009 by the author or Christianity Today/Books & Culturemagazine.
Click here for reprint information on Books & Culture.