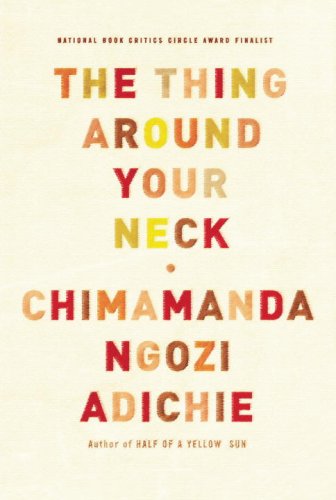 A collection of stories from Nigerian writer Chimamanda Ngozi Adichie.

Chimamanda Ngozi Adichie's collection of short stories, The Thing Around Your Neck, revolves around questions of identity in an era of globalization. We live in a world of ethnic neighborhoods with hazy geographic borders, a world of immigration, diasporas, and hybridization. The "things" hanging around all of our necks are complicated strands of social, cultural, religious, and historical roots that gradually weave into the cord of one's self.

In twelve absorbing stories, Adichie realistically portrays the lives of (mostly) women in contemporary Nigeria and the United States. The Nigerians living in the United States have come for a variety of reasons: one wife joins her medical-student husband after a six-year separation, a young woman enters into an arranged marriage, and the wife and children of a wealthy businessman enjoy an upper-middle class suburban existence in the U.S. while he travels back and forth to Lagos. All the characters struggle to find their identity in their unfamiliar settings.

The stories set in Nigeria depict a range of concerns: a woman stands in line to apply for political asylum at the American Embassy after the flight of her journalist husband and murder of her son; an Igbo Christian medical student takes shelter with an older Hausa Muslim woman in an abandoned store while machete-wielding mobs randomly kill people in the streets, and a brother and sister from the U.S. visit their Nigerian grandmother one summer and experience an Edenic fall into sin and death.

"Jumping Monkey Hill" relates the experiences of a young Nigerian writer, Ujunwa Ogundu, who is attending an "African Writers Workshop" in South Africa after quitting a Lagos banking job (where she was expected to provide sexual services for her clients). Except for Ujunwa and the elderly British South African workshop director, Edward Campbell, the rest of the characters are named only by their national and gender identity: "the Kenyan man," "the Senegalese woman."