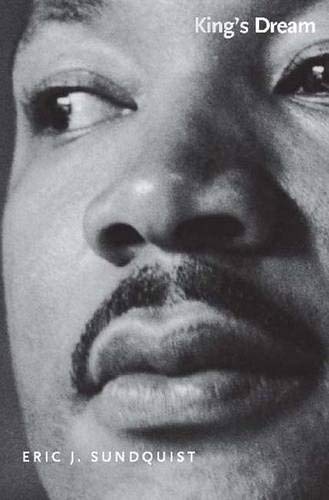 "Think with Me Today"

I have a dream … ." This simple collocation of four words has become one of the most instantly recognized quotations of all time. The Rev. Dr. Martin Luther King, Jr.'s trademark refrain is frequently borrowed the world over by journalists, preachers, politicians, screenwriters, and other communicators seeking to convey to their readers and listeners certain visions to be actualized. It marked the high point of a grand and powerful speech delivered in the heart of his country's capital, at a time of wrenching national soul-searching.

The public image of what is known today as the civil rights movement has come to be symbolized by the 1963 March on Washington. There, from a stage erected in front of the Lincoln Memorial, King addressed some 250,000 supporters rallying for protections that would take form within the Civil Rights Act of 1964, the Voting Rights Act of 1965, and the Fair Housing Act of 1968. The capstone of the historic assembly was his "I Have a Dream" speech, an oration televised around the world. Coming near the midpoint of King's public ministry, the speech encapsulated the essence of a saga begun with the local bus boycott in Montgomery, Alabama, in 1955–56 and ended by his death from an assassin's bullet in Memphis in 1968. So comprehensive has been the subsequent journalistic and academic treatment of the movement that that the meaning behind the famous words that now identify it is simply assumed.

Such unexamined assumptions can prove problematic, according to UCLA professor Eric J. Sundquist, who is author or editor of eight books on American literature and culture. In his latest offering, King's Dream, the distinguished scholar grapples with the question of what King's dream actually was. Taking the "I have a dream" speech as his unit of analysis and recorded history as his data set, Sundquist synthesizes, contextualizes, and answers the question in a number of ways.

Sundquist first reviews the history of American debates about racial justice, spanning three centuries. He then demonstrates how King's speech pristinely embodies the story of African American freedom. Next, he surveys the extent to which the meaning of the speech "has been obscured by its appropriation for every conceivable cause." He finally asserts its continuing relevance for contemporary arguments about equality. Covering some of the same territory explored in Drew Hansen's 2003 book The Dream: Martin Luther King, Jr., and the Speech That Inspired a Nation, but from a fresh perspective, Sundquist sets King's speech within the cultural and rhetorical traditions on which the civil rights leader drew in crafting his oratory.

At the outset, Sundquist lauds King for having "departed from his prepared text and spoken so eloquently about his 'dream' of racial justice in America"—a seemingly spontaneous move, reportedly encouraged through the call-and-response exhortation of gospel great Mahalia Jackson near the end of the address, that led to his sketching a brilliant image of how a righteous America would look when freedom finally had rung.

As Sundquist notes, the speech is still studied for its evidence of King's unwavering belief that equal rights for black Americans entailed nothing more, and nothing less, than returning to the nation's founding ideals. Knowing what King meant is important because the Baptist minister is universally and undisputedly regarded as the timeless spokesman for black Americans. Resting any claim on the authority of this modern-day prophet can prove determinative in efforts to make policy. And Sundquist calls attention to significant debates over King's meaning that rage on even today, among them whether King was calling for a liberal reordering of American society that would favor race-based preferences on some road to remediation for slavery and Jim Crow segregation, or whether the legislative actions designed to ensure equal opportunity, or formal equality, go far enough that his dream is thereby fulfilled.

Sundquist is never nostalgic in his treatment of the times, the man, or the speech. A comprehensive investigator, he draws on the input of King's friends, critics, and other assorted contemporaries to shed light on the subject. For example, he suggests that "I Have a Dream" might not have been King's best speech in purely rhetorical terms. He cites three other contenders in that category: the 1965 speech at the conclusion of the Voting Rights march from Selma, Alabama, for its commanding capping of two months of tension and violence that ended with a final march on the steps of the former capitol of the Confederacy in Montgomery; the 1967 anti-Vietnam War speech at New York's Riverside Church, for its stinging censure of his country's foreign policy, which cost him support and prestige among constituencies white and black; and the 1968 speech delivered in Memphis's Mason Temple on the eve of his assassination, which foretold the tragic fate that awaited him the next day, when he was shot to death. In the end, though, Sundquist rests on the judgment of the Rev. Ralph David Abernathy, a lieutenant of King's while the two simultaneously served Baptist congregations in Montgomery and, later, Atlanta, and one of the ministers who walked out onto the hotel balcony moments after King had been assassinated. Abernathy's reason for preferring "I Have a Dream," Sundquist concludes, "was exactly right": The speech was "a prophecy of pure hope at a time when black people and the nation as a whole needed hope more than anything else."

In light of the iconic rise of President Barack Obama, a contemporary observer can hardly avoid drawing parallels between "I Have a Dream" and the then-U.S. Senator's famous March 18, 2008, race-relations speech at Philadelphia's National Constitution Center, "A More Perfect Union." Both speeches included critiques of longstanding racial injustice and official inaction caused by what many regard as America's original sin, slavery. Both gave legitimacy to particular African American grievances. Both were offered at a time of national division and subsequent yearning for leadership toward unity. Both were delivered to the nation by men beloved within the black community. Both appealed to the whole of the American family. Current events in the United States are bound to keep Sundquist's readers ever mindful of the parallels between the visions of these two historical figures whose ascendancies are separated by fifty years.

Given Americans' warm bipartisan response to Obama's address, the realist must applaud with them. The fact that Americans of all ideologies enthusiastically embraced the words of a man both critical and supportive of both blacks and whites while also criticizing the status quo in a time of political brokenness showed that the country is more open-minded than it used to be. Once the applause subsides, however, the realist is further obliged to recognize that, as President Obama himself has insisted, we have not yet seen the fulfillment of King's dream. The country surely will confront more racially suspect police shootings, more Jena Six situations, and still more African American men dropping out of high schools and becoming trapped in the prison-industrial complex—the kinds of disparities King despised.

Though Sundquist does not venture far into the community that empowered King to take such liberties, he rightly implies that "I Have a Dream" was no extraordinary offering for a preacher of King's ability. King, if nothing else, was a black Baptist pastor, and the most distinguished black Baptist churches have always produced extraordinary men by encouraging creativity and promoting leaders who accomplish great things. At Morehouse College, at Crozer Theological Seminary, in his PhD program at Boston University, and in the early years of his ministry, King worked hard on both his pulpit style and on the content of his sermons. In fact, Sundquist reports, "his sermons included little of the straining, moaning, and whooping that constituted the performance essence of some African American preaching."

The initial incubator for his ministerial development was, of course, the Dexter Avenue Baptist Church, an élite black congregation whose principal place of worship was a handsome edifice erected on a fashionable Montgomery thoroughfare during the heady days of black Reconstruction. In this "class church" founded by an erudite faction intentionally segregating itself from the "mass church" First Baptist, professional black people called senior ministers offering academic distinction and leadership potential. Dexter approached the seminarian when he was only 26, and, upon accepting the pulpit after the dismissal of the legendary Rev. Vernon Johns (a doctor of theology from Oberlin), King treated his charge to thoughtful and challenging messages that called them to all forms of service.

In a typical sermon, King would ascend the pulpit in a conservative black robe and invite the congregation "to think with me today" as he argued points under titles such as "The Three Dimensions of a Complete Life" and "Paul's Letter to American Christians." Some of his sermons can be heard on recordings from those days. Listening in on a representative Sunday at the Dexter Avenue Baptist Church, one could hear a pin drop as King addressed his members in perfect diction and with deliberative restraint before concluding in a profound silence. A relevant, pre-selected hymn of invitation would mark the end of King's proclamation, King would pronounce the benediction, and the congregation could visit with their preacher at the sanctuary doors or enjoy a great classical work performed by the organist. Out of this intentionally contemplative environment came many of the ideas that would make their way into King's later sermons and addresses —a body of orations that compelled hearers to agitate for transformative change, starting with those patient Dexter deacons and trustees who supported the bus boycott and reaffirmed their young pastor's leadership even after the parsonage was bombed in response to the church's activist successes.

With "I Have a Dream," King did what he routinely had done, this time to eternal effect: "In the midst of speaking, King rewrote his speech and created a new national scripture," Sundquist states. (The head of the FBI's Domestic Intelligence Unit concluded that King's "demagogic" speech, because of its power to influence the masses, made him the nation's "most dangerous Negro," even though his more radical voice would not emerge until years after he delivered the speech.) One wonders whether there exists a comparable contemporary context for developing the kind of program that King built from Dexter; so many once-sedate black congregations' newfound embrace of noisy, undignified Sunday services and sermonic material heavy on self-help applications of Scripture has supplanted the refined theological expositions that motivated liberal Protestant listeners to change their country fundamentally, fomenting righteous reverberations that still startle societies to this day.

Amos N. Jones is an Associate at Bryan Cave LLP in Washington, D.C.