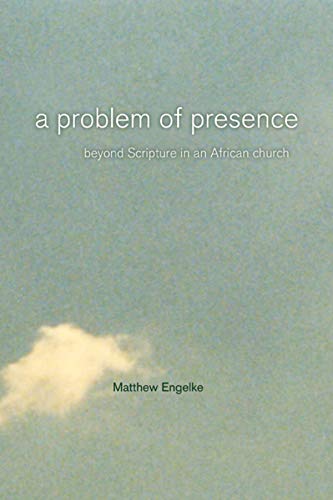 A Problem of Presence: Beyond Scripture in an African Church (Volume 2) (The Anthropology of Christianity)
Matthew Engelke
University of California Press, 2007
321 pp., 34.95

The Letter and the Spirit

An apostolic movement in Zimbabwe that rejects the Bible as a source of authority.

Johane Masowe was an African Christian prophet who founded a religious movement that stretched from Cape Town to Nairobi. Prior to May 1932, he was simply Peter Shoniwa Masedza, a humble shoemaker, working near Salisbury, the capital city of Southern Rhodesia (now Zimbabwe). But in May of that year, according to one of the traditions, he fell ill and died. On encountering God, he pleaded for a second chance to return to earth and lead Africans out of darkness. He was sent back to life, commissioned to save Africans from original sin. A heavenly voice told him that he was now Johane, or John of the Wilderness, an African John the Baptist. And so he began a ministry of teaching and healing in the Shona villages of east and central Zimbabwe, and subsequently in South Africa, Zambia, and Kenya.

Soon a new distinctive brand of African Christianity emerged. Masowe's followers, the Vapostori (Apostles), worshipped barefooted in white robes. The men shaved off their hair, wore long beards and carried staffs. And the women covered their heads with turbans. They believed that Saturday was the Sabbath and worshipped in circles under shady trees, their meetings animated by fiery sermons from prophets and beautiful melodic singing. Nighttime meetings on hilltops were often noisy dramatic affairs with exorcisms, trances, and a good deal of glossolalia. Many similar "apostolic" or "spirit-type" movements appeared in the World Depression of the 1930s, during which mission Christianity went into decline and African Christians regained the initiative. There was a good deal of schism from the original Masowe movement as ambitious young men with new revelations founded their own churches.

In the 1960s and '70s, it was enormously fashionable to study these spirit-type movements. To historians they represented a proto-nationalism, the early signs of African resistance to colonialism later manifested in fully fledged nationalist parties. To anthropologists they were remarkable examples of African ...