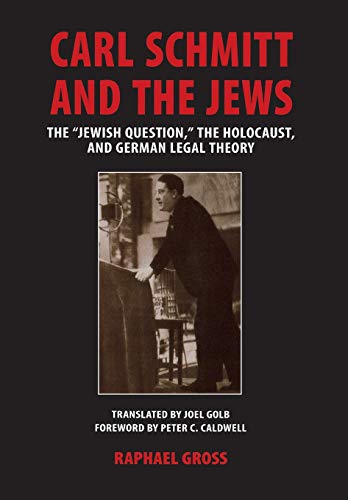 As Carl Schmitt's intellectual reputation continues to rise in scholarly circles, so does the critical heat surrounding his anti-Semitism. The more he is recognized as one of the greatest political thinkers of the 20th century—he is to political thought what Karl Barth is to theology and Martin Heidegger is to philosophy—the more acrimonious the charges become. With every scholar praising him, another—including Raphael Gross—comes to bury him. The plethora of books written about him in recent years is evidence that the race is on to decide whether the essence of his thought can be salvaged from the wreck of his racial prejudices.

Schmitt (1888-1985) joined the Nazi Party in 1933, the same month as did Heidegger. By 1936, he fell out of favor with the Nazi élite. After the war, the Allies did not permit him to resume teaching, and he spent much of his time shoring up his reputation by obscuring the evidence of his anti-Semitic fulminations.

There are two camps warring over Schmitt's anti-Semitism, one defensive and the other prosecutorial. The defense insists that his involvement with the Nazis was purely opportunistic. He was vain and ambitious, his defenders explain, and seized a chance to make history when he should have stuck to the classroom. Besides, he had a deeply fatalistic worldview that led him to disparage resistance to any reigning regime. The prosecution contends that he actively placed his political theory in the service of the Nazis. Even more disturbing is the argument that his political theory found its logical fulfillment in racist ideology. Raphael Gross enters this debate as judge and jury. He condemns Schmitt outright by arguing that every aspect of Schmitt's thought is shaped (and thus contaminated) by his anti-Semitism.