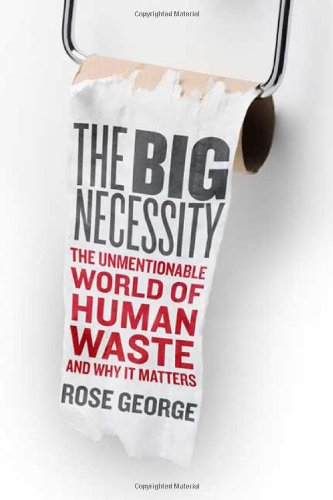 The Big Necessity: The Unmentionable World of Human Waste and Why It Matters
Rose George
Metropolitan Books, 2008
304 pp., $26.00

The unmentionable world of human waste.

This remarkable volume is in certain ways the story of euphemism, and the damage euphemism can do. We are, almost universally, at least a little disgusted by defecation and urination, and so our impulse is to turn away, to ignore the huge problems created when, several times a day, six billion of us shit and pee. Solving those problems—both at the level of the village, and of the globe—will require, Rose George says, fighting the urge to look the other way.

Here, for instance, is how Dr. Kar proceeds when he visits a Bangladeshi hamlet where there are, as in so much of the world, no working toilets—a village where people shit in the field. He asks residents to take him on a walk through their town. "It is important to stop in areas of open defecation and spend quite a bit of time there asking questions and making other calculations while inhaling the unpleasant smell and taking in the unpleasant sight of large-scale open defecation. If people try to move you on, insist on staying there despite their embarrassment. Experiencing the disgusting sight and smell in a new way, accompanied by a visitor, is a key factor which triggers mobilization."

Kar then sits the village down and gets them to calculate how much shit they're producing a day—person by person, family by family. They then try to figure out where it goes—"into their bathing ponds and rivers, and from there onto their clothes, their plates and cups, their hands and mouths." Eventually the villagers calculated that they were eating 10 grams a day apiece of fecal matter. And after that—after that they were far more open to the idea of building ...