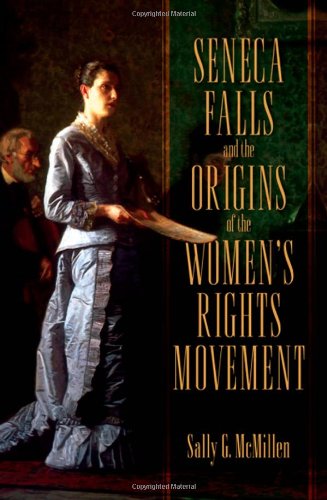 How the movement for women's rights got started.

Chatting casually with historian James McPherson, Davidson professor Sally McMillen learned that he was co-editing a series called Pivotal Moments in American History. "Surprised by what I did not hear, I responded, 'But you have nothing on women!' He looked at me and asked, 'Do you have any ideas?' 'Well, as a start,' I answered, 'Seneca Falls.'"

McMillen tells that anecdote explaining how she came to write the story of the American women's rights movement in the 19th century. For her "pivotal moment" she chose the 1848 two-day convention in Seneca Falls, New York, the first substantial meeting dedicated exclusively to women's rights. She weaves her account of the movement around four prominent leaders: Lucretia Mott, Elizabeth Cady Stanton, Susan B. Anthony, and Lucy Stone. (Unnervingly, McMillen refers to them throughout by their first names—"because I have come to know them well and because using their first names make [sic] them seem more human.") The result is a very readable, brief history—just what someone needs to begin to learn about the early trajectory of women's rights in America. McMillen is thorough and even-handed, with no ideological axe to grind. She writes well. Bravo.

Nevertheless, an unspoken question from her conversation with McPherson reverberates: how could you overlook women's rights? We are speaking of half of America, deprived of the rights of citizenship for well over a century by the greatest democracy in the world. Not even anti-slavery had such scope. Susan B. Anthony had reasons for saying, two years afterward, that Seneca Falls was "the grandest and greatest reform of all time—and destined to be thus regarded by the future historian."

And yet a great historian apparently overlooked it. And so might many others. As one woman put it to me, the story lacks testosterone. The movement's work was an almost endless series of unproductive conventions, speeches, petitions, and publications, with content and leadership that rarely ...