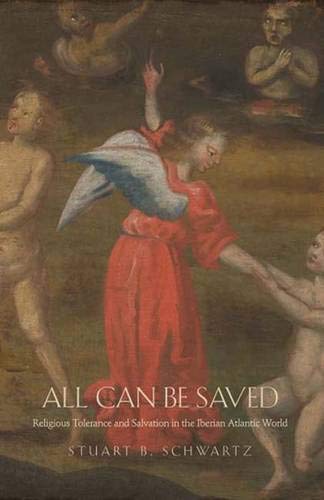 All Can Be Saved: Religious Tolerance and Salvation in the Iberian Atlantic World
Stuart B. Schwartz
Yale University Press, 2008
352 pp., 52.50

Pluralism side-by-side with the Inquisition.
November/December 2008

Religious belief in the 21st century is a matter of personal choice. In fact, belief is hardly different from any trinket purchased at a shopping mall: what you choose becomes good, true, and beautiful simply because you have chosen it. And it can become false when you rue your choice and ask for a refund. You can believe whatever you want, mix and match theologies, argue that ancient taboos within your tradition are outdated nonsense, or perhaps start a new religion if you prefer not to chuck them all. You can also tell pollsters what you believe without fear of reprisal. Belief and consumer confidence are equally open to quantification, with only a small margin of error.

We tend to take this pluralism for granted, and expect nothing but tolerance from our neighbors. In fact, 80 percent of the students in my freshman seminar recently argued that the most dangerous heresy confronting us today is the claim that there is such a thing as "truth." But how did we get here? What if we were all expected to believe in every tenet affirmed by one church that claimed to speak for God, as was the case in Western Christendom up until the 16th century, or much later in some places? Spain and Geneva might come to mind instantly, along with their notorious watchdog agencies, the Inquisition and the Consistory. How were their noisome fires snuffed out, and how did tolerance win the day?

Stuart Schwartz argues eloquently and convincingly in All Can Be Saved that the kind of plurality we now take for granted also existed in the distant past, albeit more cautiously hidden. Disbelief, indifference, and unbelief have always been an option, he affirms, and so has tolerance, which he distinguishes from toleration. According to Schwartz, tolerance—the acceptance of a live-and-let-live attitude toward those who believe differently from oneself—was practiced in Spain and elsewhere long before actual toleration became a business necessity or a legal reality. The steep and tortuous road to state-supported religious toleration, then, was not built so much by freethinking theoreticians such as Locke, Hume, and Voltaire, whose role was akin to cartographers and engineers, but by thousands upon thousands of ordinary men and women, and a few extraordinary ones, who simply refused to accept all of the theological and ethical norms that their church and state handed to them willy-nilly at baptism, or nolens volens, as the elites of that day would have said.

Relying on the meticulous records left behind by inquisitors from various tribunals in Iberia and its American colonies, Schwartz turns a bright spotlight on men and women who rejected their church's soteriological exclusivity, proposing instead that salvation was equally open to all, as long as they followed their conscience or the dictates of their faith. All of these Inquisition files analyzed by Schwartz involved people who made "propositions," or statements that were contrary to church teaching. Most of the cases concern the then-provocative suggestion that all can be saved in their own religion, summed up in the Spanish adage "Cada uno se puede salvar en su ley."

A very revealing fact is almost lost in translation here, and the key word is ley, or "law." Many of those processed by the Inquisition for their laissez-faire soteriology or agnosticism made no distinction between theology and ethics, that is, between "religion" and "law." In fact, they understood what we call "religion" as a code of behavior rather than as a set of beliefs, and were not only convinced that God offered salvation to all, but that it was offered through ethical norms. Symbols and rituals were a part of God's "laws," and therefore necessary for salvation, but the key element in this pluralistic soteriology was that of faithfulness and obedience to whatever was prescribed by the divine, not the specifics of what was prescribed (or proscribed). In many ways, the tolerant pluralists dragged before the tribunals of the Spanish Inquisition were similar to today's Unitarian Universalists, only with a stronger emphasis on the concept of salvation through adherence to a very specific code: they believed in a good and merciful God who could be reached through different paths. Some, of course, had convictions derived from indifference to religion. In any case, for all of these individuals accused of error, "otherness" was not intrinsically evil, much less demonic.

Keeping in mind that the "other" was always close at hand in the Iberian transatlantic world, due to the large presence of descendants of Jews and Muslims and of New World natives who had been forcibly converted, Schwartz admits that tolerance of such neighbors might have had some unique features in Iberia and its colonies. But he also proposes that the kind of tolerant pluralism persecuted by the Iberian Inquisitions could also be found in the rest of Western Christendom, especially after the Protestant Reformation created more "others" than ever before. Unlike Carlo Ginzburg, who made a quantitative leap of faith in his classic microhistory The Cheese and the Worms by arguing that one freethinking miller in a remote corner of Italy was representative of a vast, silent majority, Schwartz is always cautious enough not to make too large a claim about the number of tolerant pluralists.2 He also takes into account William Christian's warning about reconstructing the history of early modern Spain through the eyes of the Inquisition—which, as he says, would be akin to writing American history solely from FBI files.3 But he does suggest repeatedly that what really matters the most is not the number of dissenters but rather what they stood for. As he sees it, their inchoate, street-level acceptance of all religions was an attitudinal substratum of sorts, as essential for the development of the Enlightenment as for the eventual triumph of laws of toleration. In his own words: "All of these people provided the context of tolerance in which the ideas of the Englightenment could flourish … . They were as much the precursors of modernity as their more literate and eloquent contemporaries."

Schwartz's book packs a hefty conjectural punch, but its heart and soul is a flowing narrative that is at once gripping and enlightening. His tolerant deviants seem to be everywhere, and despite vast differences among them, all seem to share a common attitude toward religion, and toward life in general. Given how widely and how deeply he has cast his net (twelve different archives on three continents), it would be immensely difficult to disprove Schwartz's claims. Spain, Portugal, and their colonies seem as awash in tolerant "propositions" as in informers who are eager to report their neighbors to the Inquisition. These doubters are there, no doubt about it; and so are the inquisitors, recording all the challenges to authority in great detail, tending to be relatively lenient in most cases—a far cry from the sadistic monsters imagined by the so-called Black Legend. Tolerance and intolerance relate to one another in this narrative as opposite magnetic charges in an electric motor, keeping things in motion.

In a similar way, deviance and discipline are also inseparably intertwined. Many of Schwartz's tolerant or indifferent pluralists are as casual in their approach to certain behaviors as they are toward belief. This is not to say that they are all antinomians, but rather that they simply choose not to observe certain norms. Disregard for the church's sexual ethics seems to be an especially salient common link, and quite often it is a casualness about consensual extramarital sex, or simple fornication, that brings these people to the attention of the Inquisition. As the inquisitors themselves would argue, and as theologians of all stripes have argued for centuries, "heresy" and immorality are inseparably linked, for any sort of disregard for the church's teachings brings one to a slippery slope. A single case brought to light by Schwartz sums up hundreds of others: the Peruvian mestizo Francisco de Escobar, who not only made light of theology and piety but also slept with as many Indian women as he could—including mothers and daughters—and argued that fornication was not a sin, but rather a way to obey God's command, "be fruitful and multiply."

All Can Be Saved should prove to be a very important contribution to our understanding of religious belief, past and present, on several levels. First, it offers us a different kind of "history from below" which takes belief as seriously as material factors, as something that makes a difference in people's lives and is no mere response to deeper, "real" factors, such as grain prices. Second, it takes individuals as seriously as the classes or cultures and states to which they belong, simply assuming that then, as now, what one is offered by those who dominate the public sphere, or direct one's destiny, does not have to be accepted and indeed is often rejected. Third, it widens and deepens our understanding of the ways in which religious toleration—a key marker of "modernity"—developed at crucial time in Western history, not so much as an idea or a legal principle, but rather as an attitude, among the common folk. It is as much an affirmation of the significance of the individual as it is of one of the rights that even secularists are eager to consider "sacred": that of freedom of religion. Fourth, it provides further proof that the Spanish and Portuguese Inquisitions were not as monstrously sadistic as previously thought. Fifth, this book lays to rest any romantic notions anyone may have ever had about the distant past as an Age of Faith, when Christian values were monolithic. In addition, this book has many lessons to convey to all who are caught up in the culture wars that bedevil political discourse in our own day.

Oddly enough, this book about deviance has much to teach those who see themselves as anything but deviant. St. Augustine and many other a Christian thinker from the so-called Age of Faith would have appreciated what this book argues: that individuals have always been capable of questioning authority, and that belief can never be enforced. Of course they would have probably read a theological lesson into it concerning original sin and free will, and the need for salvation, as would have many of the inquisitors who haunt this book.

"Scholars do not usually approach the history of toleration from the bottom up," says Schwartz. We should all be very glad that he has done so.

Carlos Eire is Riggs Professor of History and Religious Studies at Yale University. The author most recently of Waiting for Snow in Havana (Free Press), he is currently writing a survey history of the Reformation and researching attitudes toward miracles in the 16th and 17th centuries.