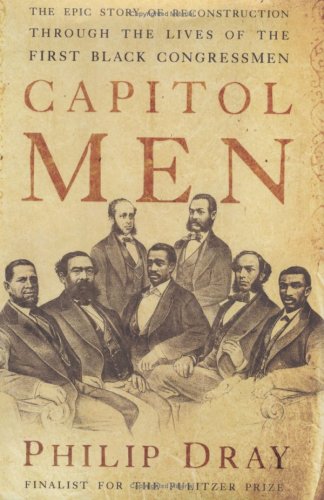 Capitol Men: The Epic Story of Reconstruction Through the Lives of the First BlackCongressmen
Philip Dray
Houghton Mifflin Harcourt, 2008
480 pp., 46.13

Another angle on Reconstruction.
November/December 2008

Being "the first black anything," declared the Rev. Dr. James Alexander Forbes, Jr., in a recent sermon before a large, historically distinguished black congregation in Washington, D.C., always presents considerable challenges. Forbes should know. He was installed as the fifth Senior Minister of the Riverside Church in New York City on June 1, 1989, and retired on June 1, 2007, after a periodically tumultuous tenure. The 2,400-member congregation's first black senior pastor, Forbes—a former professor at Union Theological Seminary—is himself the son of a North Carolina pastor. Forbes' statement in 2008 is made more poignant by virtue of the fact that he had been elected to lead Riverside, that bastion of theological and social liberalism, a full 22 years after the church had resonated to the Rev. Dr. Martin Luther King, Jr.'s radical speech "Beyond Vietnam—A Time to Break Silence." King had spoken there at a time when many mostly white Baptist churches would have denied membership to blacks on account of color, and had acknowledged privately that leading Riverside was the kind of position he had envisioned all through his formal religious studies and early ministry. Yet in 2008, Forbes, the Pastor Emeritus and a charismatic optimist, lamented the role of "first black," and did so after having served an Upper West Side church that proudly proclaimed itself "Interdenominational, Interracial, International, Open, Welcoming, Affirming."

If serving in an ostensibly friendly religious context over recent years proved racially vexing, then what must it have been like for a black man of distinction to break the color barrier in a secular institution designed not just by and for the dominant white culture, but also organized to preclude black participation in it—and to break this barrier in 1870 (only five years after the end of the Civil War)? This is the question Philip Dray authoritatively answers in his carefully researched and elegantly written book Capitol Men: The Epic Story of Reconstruction Through the Lives of the First Black Congressmen.

In 1866, two seminal acts of Congress set in motion a chain of events that would lead to unprecedented black political power in a region of the country in which there were many Congressional districts containing black majorities. The Civil Rights Act and the Reconstruction Act dissolved all but one of the former Confederate governments and divided the South into five military districts to protect the rights of newly freed blacks. The Reconstruction Act served an ultimatum on Southern legislatures: The former Confederate states would ratify constitutions conferring citizenship rights on blacks, or the former Confederate states would forfeit their representation in Congress.

The impact of federal action was swift and high-profile. Blacks acquired the right to vote across the South, and in the states of Mississippi and South Carolina, where they were the majority of the state population, they formed coalitions with pro-Union whites to take control of the state legislatures. In those days, state legislators elected United States Senators, and during Reconstruction, Mississippi's legislature elected two black Senators. The first of these came to power on February 25, 1870: Hiram Rhodes Revels became the first black member of the Senate. Later that year, Joseph Rainey of South Carolina won his Congressional election, becoming the first black member of the U.S. House of Representatives and thereby the first directly elected black member of Congress. Blacks subsequently were elected from Alabama, Florida, Georgia, Louisiana, Mississippi, North Carolina, and Virginia. Eminent Columbia University historian Eric Foner, who authored the definitive history Black Reconstruction, has identified more than 1,500 black officeholders during the Reconstruction Era.

Dray is eminently prepared to analyze this complex political earthquake from a newly specific angle. He is the author of other books treating related topics in American history, including At the Hands of Persons Unknown: The Lynching of Black America, which won the Robert F. Kennedy Book Award and the Southern Book Critics Circle Award, and was a finalist for the Pulitzer Prize.

The most noteworthy contribution of Capitol Men is Dray's placement of these public servants in an integrated-community context that includes not only "the challenging world in which they lived [but] the stories of the men and women of both races whose actions affected their role." From the outset, he goes to the local conditions that gave rise to these remarkable men. Chapter 1 paints a picture of an episode in Charleston Harbor in which Robert Smalls, a mulatto pilot with a slave crew, was left in charge of a battleship in Charleston Harbor by Confederate officers who had gone ashore to rest for the evening of May 12, 1862. The slaves hatched a plan to ease out of the harbor into the hands of the Union brigades, which had shelled this vital and imposing Southern city one year earlier as war broke out at Fort Sumter. The slaves stole the ship, delivered it to the Union, and freed themselves. "With this audacious act," Dray writes, "Robert Smalls was exploiting a lifetime of trust and privilege placed in him by his white masters—first as a favored house servant, then as a semi-independent laborer and skilled sailor." Dray offers a detailed account of Smalls' uncommon path from plantation servitude to his seat in the House of Representatives in 1875, where he would serve two Congressional districts over a legislative career spanning several years.

In addition to rescuing from obscurity the lives of exceptional black leaders, Capitol Men recovers for our instruction forgotten examples of interracial cooperation. Nowhere have more striking strides been made than in the South, and many of these in the 1800s. In a contemporary setting in which well-educated Americans would be at a loss to explain how old black churches with small memberships wound up possessing prime real estate in some of the South's best neighborhoods for so many years (consider Washington's Georgetown section, for instance, home to not fewer than three such churches), it is well that Dray calls readers to an earlier time in which many ordinary whites demonstrated the capacity to love their neighbors.

In his January 1922 article "The Evolution of the Negro Baptist Church, 1851," published in The Journal of Negro History, the Rev. Dr. Walter H. Brooks, by way of background, noted that "[w]hite persons … have been converted through the preaching of Negroes, and a few Negroes, even in the Southland, have been pastors of white Baptist churches." Brooks cited a powerful instance reminiscent of the opportunities that would be afforded to blacks decades later when the right to vote was granted. In 1818, the Louisiana Baptist Association was constituted from a nucleus of racially mixed congregations organized by Joseph Willis, "a colored Baptist preacher." "[T]hat a Negro was the first moderator of Louisiana's first white Baptist association, and rendered the denomination fifty years of service," Brooks stated, "causes us greatly to marvel in these days of race division and race antipathy."

Pulling from archived documents, newspaper coverage, and congressional records, Dray enhances the reputations of the men who led a valiant, integrated struggle for social justice before wrapping up the story on the sour chord of "race antipathy." All of the Reconstruction-era black Congressmen were members of the Republican Party, for it was heralded by the newly enfranchised blacks as the producer of Abraham Lincoln and the progenitor of the Emancipation Proclamation. The disputed presidential election of 1876 put the secession-sympathetic Democrats back into play, however, leading to a compromise by which Democrats conceded the election to Hayes and pledged to acknowledge the political rights of blacks, with Republicans agreeing to no longer intervene in Southern affairs while appropriating a portion of federal monies to the South. Reconstruction essentially became toothless, and Congressional black political power from the South would fizzle to almost nothing over the next generation.

As Dray notes, history and popular culture for decades characterized Reconstruction as an atrocious failure. While he is hardly blind to the forces of reaction that made this a "shameful time in our nation's history," Dray argues persuasively that a full accounting of the period must also acknowledge Reconstruction's outstanding achievements: strides in universal education, the forging of black political know-how and leadership, and broad national efforts to solve problems of racial prejudice and injustice. The most obvious lasting legacy of the Reconstruction-era Congresses, Dray reminds us, is the creation of laws that, although largely nullified by the Supreme Court, stayed on the books, in scandalous disuse but available nevertheless for reactivation, most crucially during the civil rights revolution of the mid-20th century.

Extending Dray's contemporary application of Reconstruction's accomplishments, readers of good will should be encouraged in the knowledge that, even today, the Civil Rights Act of 1866, passed before a single black person ever was seated in the United States Congress, remains a popular law under which blacks and others challenge discrete and systemic racist practices before American courts of law. Beneficiaries of a racially sensitive, integrationist national leadership, today's plaintiffs move society closer to the more permanent freedoms for which Congress's first black legislators advocated. Like those demanding trailblazers, these public fighters tread what Dray termed a "brief transit across history's pages" that stands for "something eminently decent."

Amos N. Jones is an associate at Bryan Cave LLP in Washington, D.C.