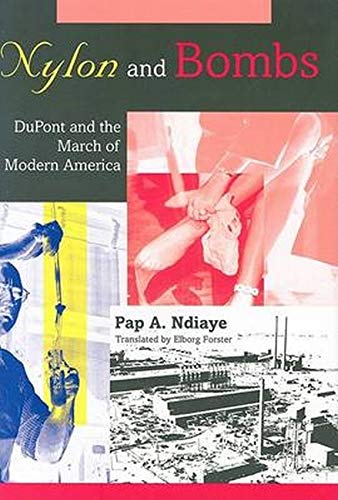 Nylon and Bombs: DuPont and the March of Modern America (Studies in Industry and Society)
Pap A. Ndiaye
Johns Hopkins University Press, 2007
304 pp., 50.0

The story of DuPont, first in French, then in English.
November/December 2008

Translation is not a transfer of meaning from one language to another, but a dialogue between two languages. —Richard Pevear

People of every nation are learning English. The language of the once-global island empire and its former colonies has conquered the worlds of technology, commerce, and popular culture. Bankers, pilots, commodity traders, film stars, and ship's captains have to know the language of Shakespeare, Lincoln, Churchill, and Yogi Berra. But the conquest is not complete. History, literature, and lab reports still first appear in French, Russian, German, Mandarin, Japanese, Serbo-Croat, Greek, and Hebrew. Authors who want their books and research to reach a global audience will eventually have to translate those results into English. Right at the moment when a scholar who writes in French or Farsi wants to reach the world, a long negotiation begins. For the French author of a recent history of DuPont and chemical engineering, that negotiation led to a book in English very different from the original in French.

We all know that some names and some subjects simply sell books. The reverse can also be true. Certain words can cut the sales of a book. Have you ever read a popular book on science that included differential equation in its title? For those few of you who have searched Amazon or your local bookstore for a page-turner on pipes and valves, the words "chemical engineering" do not appear in the titles of books on the popular science shelves. The 24 books Amazon.com lists from the search string "chemical engineering" include only handbooks and textbooks.

If you are thinking a book like this should have a title such as Formula for Success: How Chemical Engineering Changed DuPont and the Chemical Enterprise, you would agree with the author but not with his publisher. Ndiaye had a working title that included the words "chemical engineering," but his French publisher convinced him to accept a more provocative title. The title of the French edition is Du nylon et des bombes: Du Pont de Nemours, le marché et l'État américain, 1900-1970. Translated literally, the title is Nylon and Bombs: DuPont de Nemours, the Market, and the American State. To complete the sales pitch, the black-and-white cover of the French edition features a photo from the late 1930s showing a group of pretty young women in nylons. Actually une bombe (feminine) in French is best translated as "sex bomb" in English: with pretty women in nylons in the picture, you have both kinds of bombs in the DuPont arsenal. The more sterile, stylized American cover uses bold colors and a collage not open to the charge of sexism.

The American edition retained the eye-catching title but made a subtle change in the subtitle that looks like a mistake. In French the masculine noun marché means "market." Drop the accent on the final "e" and the feminine noun marche has the meaning "walk, step, or march." Did Johns Hopkins University Press make an error, or see the switch of genders as an interesting pun? We?ll probably never know. When asked, the author was silent on the subject. The word "March" adds a military connotation in the English subtitle that is different from the French version, but since the main title is "Nylon and Bombs" it is a change in emphasis that the content allows.

Those who can read the book in both languages will find that the differences go well beyond the cover. The book is longer in French by almost a third. The main reason is cultural. This project represents years of study by Ndiaye at the Hagley Museum, keeper of many DuPont archives. It is his doctoral thesis edited for publication. In France, people buy and read doctoral theses on subjects they find interesting: you can find a Parisian reading a published thesis in history at her local café. Writing standards are very high in France, where a dissertation is expected to be readable and enjoyable as well as scholarly.

The American version is shorter in part because the publisher omitted the first chapter of the French edition, putting some of the information from it in the other six chapters and the balance in a "Note on Historiography" at the back of the book. American readers want to jump right into the narrative. But even apart from this editorial decision, Ndiaye says, the style of the American edition is very different from that of the original French.

This isn't surprising. French writers in general use longer sentences than their English-language counterparts. Moreover, the logical structure of the argument is carefully embedded in the French, whereas in English it is more often implied than made explicit. At the same time, however, the French also love playing with connotation and multiple layers of meaning. This is clear, for instance, in the very first pages of the introduction to the French edition, where a lyrical paragraph becomes almost an ode to nylon. A sentence that begins with an alliterative list of adjectives is cut in two in English, ending with an assertion of nylon's central place in Western culture in the past half century. In this sentence, the author uses the French verb tramer, which means to weave, to plot, and to engineer: a perfect word to express the cultural meaning of this man-made textile. The English passage sounds dull by comparison: "Nylon revolutionized the textile industry. It led to the creation of plastics, and became a part of our culture." Much of the fun with the language that can be found even in a French PhD thesis has disappeared from the English version of the book. But on the other hand, in several places the narrative has been clarified.

Did the well-told story in French survive in English? The short answer is yes. This year DuPont Corporation is five years into its third century. Founded in 1803, the company still bears the name of the French égré who founded it. And the oldest industrial company in America is well into another centennial transformation. In 2007, DuPont sold its last carpet fiber business, having already moved out of nuclear power engineering a good while before. DuPont is now a chemical company that pins much of its hope for the future on its stake in the rapidly growing biotech industry.

The company that E. I. DuPont founded shortly after America itself became a nation made gunpowder. In its first century of operation, DuPont plants had an enviable safety record with artisan skills passed from operator to operator. DuPont made explosives using processes and expertise learned on the job and passed through shop apprenticeship. DuPont's commitment to safety is legendary. The owner and the workers lived next to the DuPont plant. Clearly the incentives for strict attention to safety were high.

When the profession of chemical engineering was born in the late 1800s, DuPont at first had no place for these new mavens of analysis. As the 20th century dawned, DuPont continued in its traditional powder-making business, but began to see promise in new processes and started a transformation that, by midcentury, made DuPont the leading employer of chemical engineers in America. In the 1950s, one in every ten chemical engineers in the United States worked for DuPont.

In 1903, DuPont kicked off its second century by opening the Experimental Station in Wilmington. The company planned to diversify into new markets away from their central explosives business. In 1904, DuPont entered the lacquers business; 1910 saw a foray into the synthetic leather market. In 1911, diversification plans got a boost when DuPont was forced to sell some of its explosive production assets. DuPont was so dominant in the gunpowder market that the (Teddy) Roosevelt Administration decided DuPont was a monopoly. From the divested factories, the Hercules and Atlas corporations were formed.

During this period, the DuPont commitment to engineering would grow as the company invested in ammonia production. While the main ingredient was free—nitrogen in the air—making ammonia required an enormous capital outlay. And though DuPont had some success increasing the ammonia business, high-pressure chemistry and ammonia were a drain on profits. With the Depression of the early 1930s, the ammonia operation struggled further. Then Wallace Carothers invented nylon. Large-scale manufacture of this new synthetic fiber required high-pressure precursors: hexanoic acid and haxamethylene diamine. Suddenly ammonia and high-pressure chemistry were vital to a fast growing market, and the long DuPont commitment to ammonia and high-pressure chemistry payed off in a big way.

Nylon took the fibers market by storm in the late 1930s, but far more ominous clouds gathered over the rest of the world. When the United States formally entered World War II in December 1941, DuPont was one of only a few chemical companies building its own plants, a major reason the Delaware-based manufacturer was chosen as the lead contractor for production of the atomic bomb. Ndiaye tells this story in considerable detail. He says that although the physicists were in charge at the beginning of the project, eventually their calculations had to be fleshed out in an actual production facility, and DuPont-led engineers took control. As Ndiaye observes, the engineers possessed "a thorough understanding of the blueprint, its special language, and the changes it called for. Here the translator has a strategic position: the apparent modesty of his role in reality conceals a transfer of power from the 'theoreticians' to the 'practitioners.'" Chemical engineers turned the ideas of the physicists into reality.

Nylon and Bombs continues the story of DuPont through its heyday in the 1950s into the early 1970s, when changes in the public perception of chemistry—in part resulting from environmental concerns and anti-war sentiment—damaged the image of the chemical enterprise. Nuclear power, which flourished in France, was increasingly on the defensive in the United States. Why the stark difference between the two countries? Not only words but also ways of seeing the world require translation, a risky but indispensable enterprise.

Brigitte Van Tiggelen is on the faculty of the Université catholique de Louvain and is the president of Mémosciences.
Neil Gussman is communications manager for the Chemical Heritage Foundation.