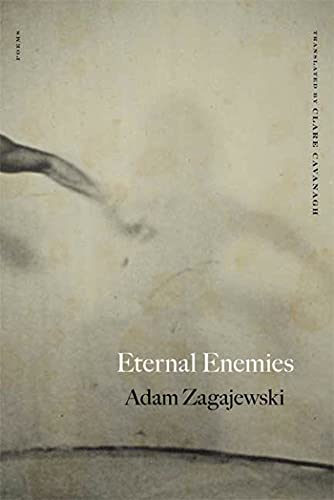 To open Adam Zagajewski's new book Eternal Enemies is to find oneself in motion. "To travel without baggage, sleep in the train / on a hard wooden bench, / forget your native land," begins "En Route." A few pages later the narrator wonders whether it was "worth waiting in consulates / for some clerk's fleeting good humor" and "worth taking the underground / beneath I can't recall what city" ("Was It"). Other poems find him in cars, imagining the "great ships that wandered the ocean," on a plane flying over the arctic, on more trains, and occasionally on foot.

Often the motion is not just from one city or country to another, but from one historical era to another. In "Notes from a Trip to Famous Excavations," for instance, the narrator sees "campaign slogans on the walls / and know[s] that the elections ended long ago," yet when a gate swings open, the past becomes present as "wine returns to the pitchers, / and love comes back to the homesteads / where it once dwelled." The poems move, as well, from concrete particular to the abstract and transcendent—from an epiphany, as Zagajewski once wrote in an essay, to the kitchen and "the envelope holding the telephone bill."

Some of poems' loveliest effects are achieved by juxtaposing one time or dimension with another, as in "Star," the opening poem. "I'm not the young poet who wrote / too many lines," the narrator recalls:

and wandered in the maze
of narrow streets and illusions.
The sovereign of clocks and shadows
has touched my brow with his hand

Notice how the narrator links "narrow streets" with "illusions," and "clocks" with "shadows." Small gestures like these give this poem, like many in Eternal Enemies, a tone that is somehow both wistful and particular. So too do the precise, loving references to buildings and streets that will be unfamiliar to most American readers (such as "Long Street" and "Karmelicka Street" and "Staglieno"—the first two in Krakow, the third a graveyard in Genoa, Italy, if you're wondering). Zagajewki's places are always more than simply places. They are both mythical and real, a quality that will come through even for readers who are less traveled and don't put down the book long enough to Google the names.

The restlessness of the poems is at least partly a function of Zagajewski's long exile. Shortly after his birth, his family was forced to move from Lvov, a lovely city in what is now Ukraine, to Gliwice, a dirty industrial town further west. (Edenic memories of Lvov haunt much of Zagajewski's work, but they are present in Eternal Enemies only indirectly and in a sly reference near the end of the book.) Forty years ago, he left Poland for Paris; he taught for many years in Houston; and he now splits his time between Chicago, Paris, and Krakow, the ancient Polish city where he went to the university and began his poetic career.

Whether Zagajewski would have been a wanderer were it not for the upheavals of his youth and early adulthood is impossible to know. But it is hard to imagine him otherwise. He sees everything with an outsider's eyes. As a critic once wrote in praise of Elizabeth Bishop, another poetic vagabond, one encounters in his poems "a magical illumination of the ordinary, forcing us to examine our surroundings with the freshness of a friendly alien."

If Zagajewski is an alien, he is an alien with a sardonic sense of humor. "A bronze Boy-Zelenski gazed at me," the speaker says in "Morning," a love poem set in Krakow, "his eyes / retained the image of a firing squad, / that masterpiece of Prussian architecture." "If only we read poetry as carefully as menus in expensive restaurants," the speaker of another poem muses, and a few lines later: "Varieties of longing; the professor counted six" ("Antennas in the Rain").

As one might expect from so restless a spirit, Zagajewski is suspicious of certainties of all kinds, religious and otherwise. His own earlier self is often the target of his critique, as when the narrator of an elegy to the Polish painter and theater director Tadeusz Kantor repents for once "having dismissed him with the pride / of someone who's done nothing himself / and despises the flaws of finished things." Although faith is a recurring theme in Eternal Enemies, it is a faith of "endless questing" and "imperfect prayers." "We don't know, we can't know," the narrator of one poem concludes, in a line calculated to unsettle devotees of the assurance of salvation, "if we'll be saved / when time ends" ("Conversation").

Eternal Enemies is Zagajewski's fifth book of poems to appear in English. Born in 1945, he emerged in the New Wave of Polish poets in the 1960s, writing raw, stripped-down verse that implicitly and sometimes overtly challenged the totalitarian political establishment of his seedtime. Zagajewski later reinvented himself, employing the first-person perspective of traditional lyric poetry, a shift that has been criticized by some as abandoning the earlier commitments.

To hint at least at what I assume is the music of the Polish originals, Clare Cavanagh, Zagajewski's longtime translator and a perceptive scholar of Slavic literature in her own right, uses intricate but usually understated patterns of sound, as in the l's and o's and b's of "that dusty little apartment in Gliwice, / in a low block in the Soviet style / that says all towns should look like barracks." ("In a Little Apartment"). The poems are so beautifully rendered it is easy to forget that English is their second language.

The book is very cleverly crafted, its three sections proceeding in loosely reverse chronological order. The streets of Krakow, and the narrator's return years after his university days, turn up frequently in the first section (as in "Star," quoted above). In the second are elegies to some of the writers who helped shape Zagajewski's own voice: Czeslaw Milosz, W. G. Sebald, Joseph Brodsky. Ancient history and myth link many of the poems in the final section- Sophocles, Syracuse, a poet from Telos who died at nineteen.

But the deep structure of the book is symphonic, with images from one poem reappearing elsewhere. "Antennas in the Rain," the book's final poem, serves as a kind of key to motifs that are developed in other poems. "Reading Milosz by an open window. The swallow's sudden trill," for instance, is the bittersweet bud from which both an elegy to Milosz and a short, haunting poem about Auschwitz blossom.

One recurring motif, which appears in poems in each of the book's three sections, is the narrator's assurance to his beloved that "music heard with you was more than music." The Caravaggio masterpiece "The Calling of Saint Matthew," in which Jesus beckons with outstretched finger to Matthew, appears in three different poems, the first focusing on Matthew himself ("was I truly / summoned to become human?"), the others on the "nobleness … of Christ's face"). The soloist in an Orthodox church "recalls the voice / of Joseph Brodsky reciting his poems / before Americans, unconvinced / by any sort of resurrection, / but glad that somebody believed" ("The Orthodox Liturgy"), a theme further developed in "Subject: Brodsky," one of the most beautiful poems in recent memory.

The voice of these poems—the mixture of faith and doubt, humor and longing, history and urgent present—is unlike anything else in contemporary poetry. If the settings accurately reflect Zagajewski's own life, his travels have not yet taken him to Sweden. If there is any justice in Stockholm, he will be invited there soon.

David Skeel, a law professor at the University of Pennsylvania, blogs about Christianity, law, literature, and other topics at www.lessleast.com.