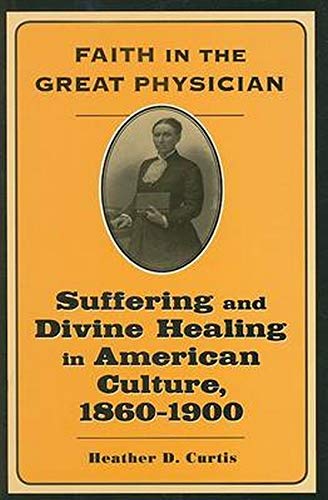 A friend of mine who pastors a large church in North Carolina recently totted up the prayer requests he gets from his parishioners. When they ask him for prayer, what do they want him to pray for? In short, healing. He realized what prompts the vast majority of these prayer requests is illness—something like 95 percent of their prayers are for healing, either for themselves or for someone else.

It's a safe bet that surveys of your church would turn up similar results. How did we come to pray so fervently for recovery from illness? As Heather Curtis notes at the outset of her fascinating first monograph, it has not been ever thus. Although one can certainly find prayer for healing popping up throughout church history, for much of the last 2,000 years those prayerful desires for healing went hand in hand with a certain veneration of bodily affliction. Suffering was seen as a privileged spiritual state: bodily pain presented the believer an opportunity to identify in an especially intense way with the suffering Christ. Hence the many medieval women mystics who actively sought bodily affliction.

By the 1850s, the long tradition of sanctified suffering had combined with Victorian etiquette and gender roles to produce a norm of "passive resignation" in the face of illness. Sick people, in particular female invalids, believed that their sickness was God's will, and the most faithful response was humble submission. Women who patiently bore illness that kept them confined to bed for decades were understood as "spiritual virtuosos," who were often blessed by God with special visions that would sustain them through their trials. Their very bodies, passively propped up on pillows, were tokens of faith in the sufficiency of God's grace.

Between that assumption of sanctified suffering and the characteristic outlook of American Christians early in the 21st century lies a great gulf. How did we arrive at a Christian idiom in which praying for healing is the most natural thing in ...