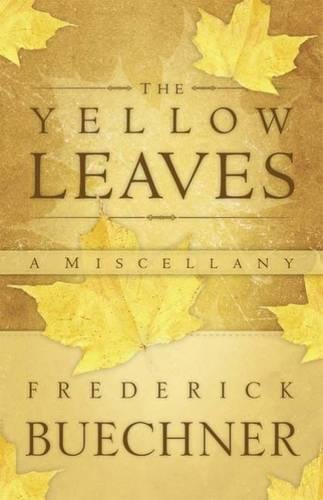 In January of this year, King College in Bristol, Tennessee hosted the inauguration of the Buechner Institute, a faith-and-culture center directed by Dale Brown. Frederick Buechner himself was present, and when he addressed the audience, there was an expectant hush.

The guest of honor, without much preamble, told his listeners that for about ten years he had been unable to complete any substantial writing project. A very quiet auditorium became quieter still. Buechner went on to say that each day he goes out to his "Magic Kingdom," the separate place—set apart from the house—where for decades he has done his writing. There he is surrounded by his magnificent collection of first editions and assorted objects of significance to him. He writes, yet nothing comes to fruition.

Recently, he said, he had sorted through the accumulated fragments of the last few years and found some bits that seemed to stand up on their own, enough to make up a small volume, a miscellany, to be published under the title The Yellow Leaves. He quoted the relevant lines from Shakespeare's Sonnet 73:

That time of year thou mayst in me behold
When yellow leaves, or none, do hang
Upon those boughs which shake against the cold,
Bare ruined choirs where late the sweet birds sang.

He then proposed to read a couple of the pieces he had salvaged, and did so, to great applause. And now, six months later, as promised, the book has been published by Westminster John Knox Press. "I can still write sentences and paragraphs," Buechner says in the half-page introduction, "but for five or six years now [or ten, perhaps], I haven't been able to write books. Maybe after more than thirty of them the well has at last run dry. Maybe, age eighty, I no longer have the right kind of energy. Maybe the time has simply come to stop. Whatever the reason, at least for the moment the sweet birds no longer sing."

It's a very slim volume, mostly consisting of short reminiscences, but also including a scene from an unfinished novel (its incompleteness much to be mourned, since it would have added to The Book of Bebb) and, at the end, a gathering of "Family Poems."

Please don't suppose that I'm bringing this book to your attention dutifully, hinting that you might want to acquire it for old times' sake and place it on your Buechner shelf more or less unread and tactfully unmentioned. I love miscellanies, and this particular miscellany—uneven, of course—has much to offer. The two pieces Buechner read that day at King College, "Our Last Drive Together" and "Presidents I Have Known," are both superb, and the contrast between them—in the way they proceed, in their imaginative register—helps to illuminate Buechner's distinctive appeal.

Go back a moment to that ceremony at King College and put yourself in the crowd. You might well feel contradictory emotions, as I did, after Buechner's opening confession. We expect this sort of candor from the author of Telling the Truth, and there was an irresistible pathos to the lines from Shakespeare, yet the prospect of hearing a writer we have much admired read fragments of unfinishable work is not exactly welcome. For a moment I was afraid for him and overcome by that awkward embarrassment which is in part, via empathy, a fear for oneself.

No need to worry, it turns out. "Our Last Drive Together," which Buechner read with occasional asides, is a blackly, terribly funny account of a car-ride from Vermont, where Buechner's aged mother (known as Kaki) had been visiting, to New York, where she lived. As so much of Buechner's writing does, it touches on his father's death "in a garage filled with bitter fumes when I was ten and Jamie [his brother] going on eight." In his asides, as elsewhere, Buechner gave the impression that he blames his mother for his father's suicide, though that isn't explicit in this piece, which concludes with an account of Jamie going to their mother's apartment after her death, having been summoned by the housekeeper. There is a mix of tenderness and savagery in Buechner's account of his mother in old age—do the imperatives of truth-telling really extend this far?—and if, as I suspect, Buechner's title is intended to remind us of Browning's "The Last Ride Together," there's an extra twist to the sardonic knife. "What if," Browning asks at the end of that poem, he and his beloved find themselves after death

Changed not in kind but in degree,
The instant made eternity,—
And heaven just prove that I and she
Ride, ride together, forever ride?

But if that twist is intended, certainly the writer feels the blade in his own gut.

"Presidents I Have Known" (the title delightfully self-mocking) is a dreamy piece that is driven by leaps of association and insight. Buechner's encounters with three presidents—Franklin D. Roosevelt, Harry Truman, and Dwight Eisenhower—frame childhood memories that cover some of the same territory touched on in "The Last Ride Together," but more expansively here and with a different tone. What's most striking about the piece is the combination of an exquisite eye for absurdity with a lyric poet's momentary ecstasy and an unabashed expression of feeling that 99 percent of all "serious" writers would avoid for fear of being dismissed as sentimental.

Ah, you say, I'm sorry that Buechner's father killed himself, but another piece circling around that loss? I don't think so. Well, I understand the reaction, and you'll have to decide for yourself. But I'm awfully glad that this piece didn't remain buried in a heap of fragments in Buechner's hideaway. It's full of the rich strangeness of our lives, beginning with his memory of seeing FDR in a hotel lobby in Washington, D.C., when Buechner was about six years old. There was a moment when the president stood framed by the doors of an elevator, "standing between two men," each of them supporting an arm. "He was the most important man in the world. But I could see with my own eyes that if he didn't have those two men to help, he would be helpless."

Then to Paris in 1956, where Buechner and his wife are taken by her parents for dinner at the fabled Tour d'Argent. At the restaurant there's a sudden bustle, signaling the arrival of President Harry Truman and his wife, Bess, accompanied by a group of French dignitaries. The angle of vision is such that, after Truman is seated, Buechner finds that for a moment he is able to look through the president's "thick-lensed glasses" and, "more wonderful still, … look through them at Bess." And "the Bess he saw was of course not the Bess I saw"—"stout, dowdy, making the best of things as she tried to think of what to say next to their fancy hosts"—"but the fact that we were both seeing her through the same glasses made it almost seem so." There's a second revelation later in the meal, when all the lights in the restaurant are briefly turned off. Through the windows Notre Dame is visible, and the Seine, "like a river of stars. The glittering necklace of lights along the quai. The April moon":

All in a moment it was laid out before us for the sake of that one small man from Missouri with his double-breasted suit and wire-rimmed glasses and the woman beside him he referred to as the Boss.

And finally Eisenhower, whose inaction as president on various fronts dismayed Buechner but whose smile charmed him: "It was an utterly spontaneous smile. It was a smile that held nothing back." (Here you can imagine the scorn of sophisticates for Buechner's sentimentality.) At an Exeter commencement where Eisenhower was the speaker (his grandson David was among the graduates), and where Buechner was to give the invocation, they talked about the stray dogs that manage somehow to make their appearance at such ceremonies: "We had our little laugh together, President Eisenhower and I, and for the last time I got to see that smile that made me almost believe that maybe everything would turn out all right in the end even so."

That is our wildly improbable hope—that all will be well—and it runs through this miscellany from beginning to end.