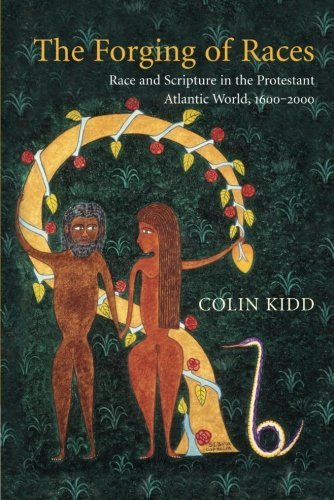 Not from the Bible.

The secular mind is apt to assume that the Bible has been an immense drag on human progress. Over the past several centuries, Western culture has moved triumphantly toward affirming the noble goals of liberty, equality, and fraternity. This march has been slowed, however, because of the dead weight of biblical authority. An antiquated tome from the days when the propriety of oppression was taken for granted has continually blocked the road. Slavery and racism held on so long in the United States and apartheid in South Africa because white Christians stubbornly clung to ancient texts as the last word on human relations.

Colin Kidd's well-researched, wide-ranging, and insightful book, The Forging of the Races: Race and Scripture in the Protestant Atlantic World, 1600-2000, demolishes such assumptions when it comes to the issue of race. Kidd's persuasive and learned monograph is no gloating work of Christian apologetics. If anything, he seems slightly embarrassed by how well orthodox Christianity comes out in his narrative, trying to tone it down with mitigating statements calculated to make the accounts look more balanced than they actually are. What are in fact the obvious conclusions from his evidence repeatedly appear coyly as questions. Kidd also has a habit of using refracted or muted language.

Nevertheless, there is no effective way to offset the decisive direction in which his evidence takes us. Even the Old Testament—that vast, stagnant pond in which all manner of offensive viewpoints are supposed to lurk—offers no support to racists. Kidd admits this candidly: "the Bible is itself colour-blind with regard to racial difference." Racists have often quoted Scripture when expounding their views, but Kidd observes that they imported these racial readings into the text rather than finding them there. The New Testament teaches unequivocally that God "hath made of one blood all nations of men" (Acts 17:26 KJV). In traditional scientific terms, this is a denial ...