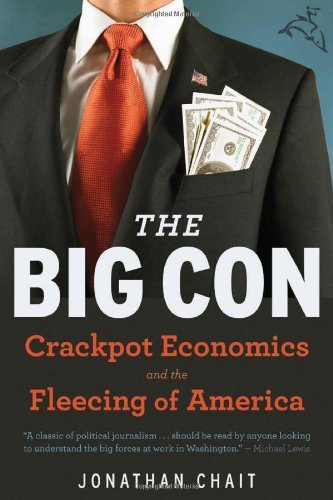 The Big Con: The True Story of How Washington Got Hoodwinked and Hijacked by Crackpot Economics
Jonathan Chait
Houghton Mifflin Harcourt, 2007
304 pp., 25.00

The Government We Deserve

Are we forever to be at the mercy of thieves and ruffians?" cries Mrs. Lightfoot Lee, the socialite protagonist of Henry Adams' Democracy. "Is a respectable government impossible in a democracy?" An ill-mannered Red might have asked Mrs. Lee how she thought her inheritance was acquired and protected. Alas, such people aren't invited to Washington dinner parties, and so an answer comes from Senator Silas P. Ratcliffe, a thief and ruffian with presidential ambitions. Hoping to seduce the earnest Mrs. Lee with philosophical charm, Ratcliffe opines on the state of democracy like an Aristotle on the Potomac. "No representative government can long be much better or much worse than the society it represents."

Unlike Mrs. Lee, Jonathan Chait is no naïf. Senior editor at The New Republic and author of its venerable "TRB" column, he's had a front-row seat at the spectacle of decadence that's been running in the Beltway. In lucid, brisk, and wonderfully sardonic prose, Chait relates the history of the Second Gilded Age, during which a new generation of rogues and knaves has purchased the rights to the republic. Wacked-out eggheads, legislator-lobbyists, shilling pundits: the imperial city is a pestilent bedlam of chicanery, avarice, and fraud. In the finest tradition of progressive dudgeon, Chait recites the roster of corruption and shame and calls on a vigilant and outraged people to reclaim the halls of self-government.

It's an infuriating tale and a noble call, but as Ratcliffe shows, there's wisdom if not honor among thieves. Like so many wizened scoundrels, the senator exhibits the detachment that comes from a lifetime of successful malfeasance. Chait's research is impeccable, and his umbrage is justified, but Ratcliffe may have the final word: the government can't be any better than the society it represents. By all means, throw out the rascals, but it's the world outside the Beltway echo chamber that truly needs to be transformed.

So how did Washington get so loony? Once ...