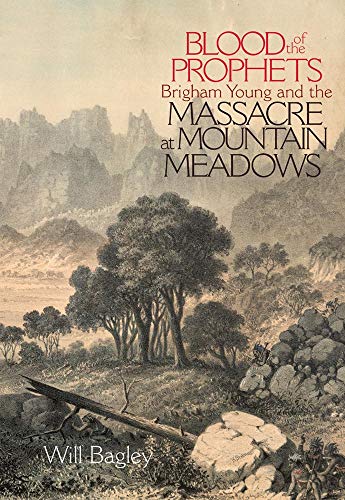 Blood of the Prophets: Brigham Young and the Massacre at Mountain Meadows
Will Bagley
University of Oklahoma Press, 2004
544 pp., 26.95

On Friday, September 11, 1857, a Mormon settler named John D. Lee used a white flag to approach a besieged emigrant train in southwestern Utah. Unexpectedly, the pioneers had traveled into a maelstrom. As they made their way from Arkansas to Utah, roughly one-third of the entire American army was journeying toward the Great Basin, escorting a non-Mormon governor designated by President James Buchanan to replace Brigham Young. Only 13 years after the murder of Joseph Smith and with stark memory of his people's expulsion from Missouri and Illinois, Young prepared for war, ordering Mormons not to sell needed food or ammunition to gentile emigrants. Throughout August, tensions between Mormon settlers and the pioneers flared as the group made its way through southern Utah.

When Lee approached them, the emigrants had been holed up for four days at a lush watering place called the Mountain Meadow. On Monday, a barrage of Indian gunfire and arrows had surprised them at daybreak. After losing a dozen or so of their number, the pioneers successfully circled their wagons, dug fortifications, and fought back. By Friday, however, they were running low on ammunition, parched from thirst, and out of hope. Lee, a major in Utah's Nauvoo Legion militia, offered to help. If they would surrender their weapons, he and his men would protect them from the Indians.

Despite their suspicions, the emigrants accepted Lee's offer. Lee placed the wounded and young children in wagons; behind them marched the emigrant women and older children, followed by the men. Next to each unarmed man marched a Mormon soldier. Alongside the trail, Paiute warriors were hidden in the brush. When Nauvoo Legion Major John Higbee gave the signal, the escorts turned and shot the emigrant men at point-blank range. The Paiutes, joined by some of the Mormons, butchered the women, older children, and wounded adults. No one escaped, although the attackers spared seventeen young children. The exact number remains uncertain, ...