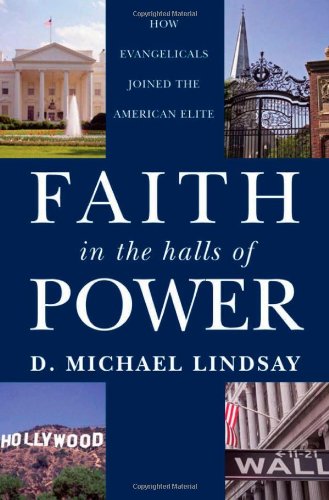 Thankfully, the publication of Faith in the Halls of Power suggests that the American publishing industry's season of silliness when it comes to covering evangelicalism's influence in the public square has come to a close. In the last two years, we have had to endure such awful books as Kevin Phillips' American Theocracy and Randall Balmer's Thy Kingdom Come, with their crude and simplistic attacks on populist evangelical efforts to shape public policy and the culture. By contrast, sociologist D. Michael Lindsay's new book offers a nuanced and engrossing account of the complex role that evangelical elites are now playing in U.S. politics, academia, the entertainment industry, and corporate America.

Instead of dreaming up a right-wing evangelical cabal guided by the Christian Reconstructionist writings of R.J. Rushdoony and intent on taking over American politics, academic life, popular culture, and business, Lindsay looks hard at evangelical elites in these different domains and reports what he finds. Among other things, Lindsay finds that American evangelical elites approach these domains from a range of political, ideological, and theological perspectives. He points to politically progressive evangelicals such as former President Jimmy Carter and to hard-to-pin-down figures such as Dr. C. Everett Koop—who angered the religious right by calling for early sex education and condoms in the fight against HIV/AIDS—to remind us that evangelical leaders in public life are not uniformly associated with the right wing of the Republican Party.

The portraits Lindsay paints of evangelical elites in academia, business, and Hollywood also suggest a good deal of ideological heterogeneity in their midst. For instance, he quotes an evangelical Hollywood director who has this to say about Ted Baehr's Movieguide, which evaluates the moral content of films: "It is stuff like this that trivializes the artistic works we are seeking to produce. Am I going to censor my work for Ted Baehr's 'wholesome' rating? Some would say I should … . [But] as an artist, I'm disgusted by that … . Where's the commendation for making an authentic movie, one that points to truth—no matter how bloody or dirty the truth may be?" With countless examples like this drawn from the worlds of Hollywood, academia, business, and politics, Faith in the Halls of Power punctures the crude caricatures of evangelicalism's influence in the public square that have been drawn by the likes of Phillips and Balmer.

Of course, the story here is not one of infinite diversity; there are important patterns that capture Lindsay's eye. Perhaps the most important pattern he finds is that evangelical elites can basically be categorized into two different groups: the populist elites who hail from the institutions embedded in the evangelical subculture (think James Dobson, chairman of Focus on the Family), and the cosmopolitian elites who hold high positions in the secular world (think Francis Collins, director of the National Human Genome Research Institute).

The populist elites rely on mass mobilization, political action, and appeals to the common believer, and they exercise a big role in Christian ministries, Christian publishing, Christian music, and the growing field of Christian film. They often employ a moralistic rhetoric, and adhere to a traditional worldview, that puts them in clear tension with the broader secular world. In Lindsay's words, "Unlike more cosmopolitan public leaders, these movement leaders derive their authority from the evangelical subculture, and the subculture remains their primary point of reference."

Indeed, evangelical populist elites have managed to make a difference in the broader society—especially in the world of politics—by drawing on their standing in this subculture. In particular, populist elites have played a crucial role in focusing the attention of politicians on matters like abortion, same-sex marriage, and judicial reform. Were it not for their networks, their institutional resources, and their mobilizing power, the United States would look a lot more like Sweden than it currently does on matters related to sex, marriage, and judicial policymaking.

The populist elites have also managed to have a major impact on the public's perception of evangelical Christianity, and not always for the best. In part because of their standing in the evangelical subculture and in part because of their polarizing rhetoric on contested social issues, the media has anointed populist leaders such as Dobson and the late Jerry Falwell as spokesmen for evangelicalism. Of course, the irony is that the most parochial and polarizing figures from the world of evangelicalism tend to be the ones most likely to be called to speak for evangelicalism in the public square. This is one major obstacle standing in the way of evangelical legitimacy in the worlds of politics and especially academia, the entertainment industry, and business.

The cosmopolitan evangelical elites who are embedded in the secular worlds of politics, academia, Hollywood, and business take a very different approach to their engagement with the world. A large minority of them shy away from the word "evangelical," and many are leery of being associated with the public face of evangelicalism—especially populist elites, whom they view as simple-minded, unhelpful to the Christian witness, and sometimes even dangerous. Lindsay reports, "One business leader told me he prefers to read Leo Tolstoy or Dorothy Sayers rather than the 'evangelical kitsch' at his local Christian bookstore." Because they are affluent, hail from the secular world, and mingle with people from a range of different religious backgrounds, these cosmopolitan elites shy away from strident rhetoric and confrontational tactics. Instead, they try to use their knowledge, networks, and abundant resources to share the Gospel and reform society from the inside.

Take Dennis Bakke, the former CEO of energy giant AES. In 1992, he and his family founded the Harvey Fellows Program, which was designed to bring evangelicals into the halls of academic and political power. Since then, the program has supported more than 250 graduate students in the fields of arts, humanities, law, medicine, and business. Many of the program's graduates have gone on to positions of leadership in the White House, Wall Street, and the ivory tower. This effort is designed, in Bakke's words, "to redeem the structures that shape society, as well as the people in it." So, rather than mount a public campaign against Hollywood depravity, as Don Wildmon might, Bakke has tried to equip bright young evangelical men and women with the skills they need to change the world from within the citadels of power.

Over the long term, Lindsay suggests, the "move-the-dial-Christianity" of evangelical cosmopolitan elites has the potential to exert more influence over society than the polarizing techniques of their populist brethren. That is, by taking up positions of responsibility on Madison Avenue, Wall Street, Cambridge Square, and the White House, evangelical cosmopolitans will be well-placed to steer America's leading institutions towards the common good and to persuade their non-evangelical peers that they too should pursue that common good. And by entering the citadels of power in a peaceful and prudent manner, the cosmopolitans are more likely to gain real, enduring influence in those citadels, compared to their populist brethren, who are usually to be found assaulting the outer walls of those very same citadels with rhetoric and public policies that often do more to repel than persuade our nation's nonevangelical elites.

But so far, at least, cosmopolitans have achieved few major successes outside the political sphere, and there are at least three obstacles standing in the way of such an enterprise. First, most cosmopolitan evangelical elites, despite their relative sophistication in comparison to populist activists, do not have ready access to a public philosophy that would enable them both to articulate a secular vision of the common good and to convince a substantial number of nonevangelical elites to join with them in pursuit of that good. If evangelical elites wish to advance the common good on a range of fronts—from the environment to abortion, from HIV/AIDS to the renewal of our popular culture—they need to be able to articulate a vision of the common good that is winsome and compelling to nonevangelicals. They have not yet articulated such a vision, and it will be profoundly difficult for them to do so in the near future, given the moral divisions in contemporary America.

Second, Faith in the Halls of the Power reveals that cosmopolitan evangelicals are often desperate to distance themselves from the excesses of populist evangelicalism and gain legitimacy in the eyes of their secular peers. "As evangelicalism is seen as more legitimate (i.e., 'normal' or 'acceptable' in elite circles), [cosmopolitans] believe, it will gain both prestige and prominence and will be embraced by more people," writes Lindsay. "Hence the quest for legitimacy takes on not just social but also religious significance." The problem with cosmopolitan evangelicals' drive for legitimacy—accompanied by a fervent desire to keep their populist brethren at arm's length—is that many of them may be tempted to walk right into the embrace of leaders and institutions who harm the common good. Recall the evangelical Hollywood director who seems downright eager to make "bloody or dirty" films in service of the "truth."

Finally, and most important, Faith in the Halls of Power reveals that many evangelical elites have established only the shallowest roots in a specific church and a specific religious tradition. A large majority of evangelical leaders have switched congregations and denominations more than once, according to Lindsay. Most adhere to an "elastic orthodoxy" that stresses faith in Jesus but downplays doctrinal differences regarding baptism, ecclesiology, and communion. Many leaders focus more of their spiritual lives on parachurch ministries—where they get to associate with like-minded and similarly well-heeled Christians in comfortable settings—than on their local churches. Men and women who are not rooted in a local church and a clear tradition would seem to be particularly vulnerable to the individual sins that afflict those who enjoy privilege and power. And without a clear theological framework and Christian community to guide them, these leaders would also seem vulnerable to committing the corporate sin of accommodating their institutions to the zeitgeist, even when that zeitgeist threatens the common good.

So the fundamental and unanswered question that Faith in the Halls of Power leaves the reader with is this: are cosmopolitan evangelical elites destined to renew the halls of power or be conformed to them?

W. Bradford Wilcox is assistant professor of sociology at the University of Virginia and a fellow at the Baylor Institute for Studies of Religion.