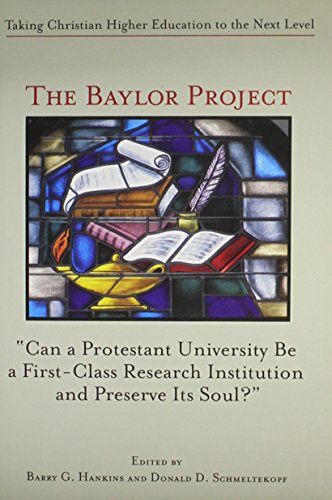 The Baylor Project: Taking Christian Higher Education to the Next Level

Our story so far: The conservatives have won control of the Southern Baptist Convention and its seminaries. Will they capture Baylor, the "World's Largest Baptist University"? President Herbert Reynolds engineers a brilliant political coup and makes Baylor independent while the "fundamentalists" fume. Satisfied that Baylor is safe, Reynolds turns the university over to Robert Sloan, only to see Sloan unveil a plan for a most extreme makeover. "Baylor 2012" will turn Baylor—mainly a Texas undergraduate school—into a national university with Ph.D. programs and research professors. It will change Baylor from a Baptist university into an "intentionally Christian" university whose professors integrate their faith with learning. Dismayed, Reynolds and his allies resist. This produces so many controversies that Baylor becomes the Britney Spears of higher education. The Board of Regents turns against Sloan, he resigns, and the unknown John Lilley becomes president. Everyone wonders: What will happen to Baylor 2012?

The book is The Baylor Project, and its publication history sounds like a Texas tall tale. Editors Barry Hankins and Donald Schmeltekopf initially planned the book as a dialogue between proponents and opponents of Baylor 2012, with responses by Reynolds and Sloan. But Reynolds and all but two opponents refused to participate. The director of Baylor University Press indicated he would publish it, then backed off. The book "did not survive peer review," he said, but he refused to let Hankins and Schmeltekopf see the reviews.

Then John Lilley agreed to have the university itself publish the book, and 500 copies were printed. Enter Reynolds, shooting from the hip. He fired off one e-mail deriding the book as a "historical embarrassment," an unscholarly attempt to salvage "the concerted efforts of a few over the past decade to create a new orthodoxy at Baylor." Then he threatened Hankins and Schmeltekopf. If they published the book, he would release secret documents that he had kept in his "asbestos files." These would expose Sloan as a fraud. Claiming to be an expert in "psychological warfare," he was waiting for "the most strategic moment to strike" at "their soft underbelly." "Since you have dispensed with moderation," he closed ominously, "so shall I." At this point Lilley cancelled publication and sequestered the print run. Undaunted, the editors reworked the book and found a new publisher. Then on the eve of publication, Reynolds unexpectedly died. The secret documents remain a mystery.

The Baylor Project is not nearly as inflammatory as Reynolds' attempt to suppress it. Anyone hoping it will reveal the down-and-dirty about Baylor politics will be disappointed. Most of the Sloan-era controversies go unmentioned, including the idea of selling the 18-hospital Baylor Health Care System and the creation of a science-and-religion center devoted to intelligent design. The book consists of twelve essays on topics related to Baylor 2012, plus a lengthy response by Sloan. Though a few of the essays raise questions about how Baylor 2012 was implemented, none are critical of the vision itself. Their collective argument is that 2012 is a continuation, not an abandonment, of Baylor's traditions.

As this suggests, the war over Baylor's future has been fought on the battlefield of its past. Competition for students and money is fierce, so every college constructs myths about itself that it tends with elaborate care. History is sacrificed to the imperatives of image management. The enemies of Baylor 2012 deployed four of Baylor's favorite myths: (1) Despite Baylor's low tuition, it had already achieved true academic excellence. (2) Undergraduate education and faculty research are a zero-sum proposition. (3) Low tuition kept Baylor affordable for worthy students of modest means. (4) Individual freedom is the Baptist prime directive, and therefore individual freedom would safeguard Baylor's Baptist identity.

One way to fight myth is with history, so several of this book's essays reconstruct key events in Baylor's recent past. Larry Lyon, currently Dean of Baylor's graduate school, recounts how difficult it was to convince the Regents that Baylor needed serious academic improvement. At one point a Regent took him aside and told him "to remember who paid my salary before making any more negative comments about Baylor." The book explains that Baylor 2012 added faculty and decreased teaching loads, which gives every undergraduate as much access to professors as before. Baylor 2012 also added numerous undergraduate programs, moved more undergraduates into on-campus housing, and better integrated on-campus living into the curriculum. David Brooks, Sloan's CFO, shows that higher tuition packaged with an increase in scholarships actually produced a more diverse student body with a lower average family income. He also explains that Baylor's use of debt to finance expansion—a change in policy that had Sloan's critics rending their garments—was actually profitable. Baylor made more in interest on its investments than it paid on its loans. Hankins' perceptive observations of the identity crisis among Southern Baptist colleges in the 1990s make the genesis of Baylor 2012 much more understandable. And Hunter Baker's essay shows how the conservative takeover of the SBC drove their opponents to tenacious defense of the Baptist principle of "soul liberty."

Several essays point out what should be obvious—it takes more than freedom to make a Baptist, and the idea that "freedom" is enough to preserve the Baptist character of a university is jaw-droppingly disingenous. Only one essay offers sustained treatment of a major controversy—Sloan's dustup with the Alumni Association. C. Gwin Morris tells the story with such equanimity that even Sloan is forced to admit he could have handled it better. Which does make the reader wonder if a more deft political touch might have minimized controversy at Baylor.

Three essays show how it was Reynolds, not Sloan, who first set in motion elements of Baylor 2012. Schmeltekopf, provost under both presidents, reveals that Reynolds aspired for Baylor to be an elite research university. Despite faculty reluctance, he quietly created many new graduate programs. Historian Thomas Charlton explains how entry into the Big 12 athletic conference plopped Baylor into a peer group of national research universities, and this immediately began reshaping Baylor's programs and lifting its aspirations. And philosopher Michael Beaty has written a fascinating chapter on the "charter change"—Reynolds' preemptive strike that made Baylor independent of the denomination, forestalling a conservative takeover.

The question is, independent to be what? Reynolds believed that fundamentalism was the only threat to Baylor's religious character. The charter change was his Maginot Line—a powerful defensive system, yes, but useful against attack from one direction only. Sloan and his allies, however, knew that Baylor faced a threat on another front. Now that fundamentalism had been defeated, the border on the frontier with secularization had to be secured.

The key was hiring Christian faculty. Sloan and his provosts aggressively recruited Christian scholars from every denomination and from all over the country. They also rigorously screened departmental hiring recommendations, and provoked much resentment by rejecting several each year. They weren't just looking for Christians; they sought those who could "integrate faith and learning" in a way that would "engage the world from a uniquely Christian perspective."

Several essays in this book defend this, but such a perspectival approach to faith and learning did not quite fit Baylor. It's a northern evangelical idea, and the Yankee evangelicals who brought it to Baylor reminded many Texans of modern-day carpetbaggers. More important, perspectivalism is a creation of philosophers, and it works better for the humanities than the sciences. It speaks volumes that of the book's 14 contributors, there are four philosophers and not a single scientist. Lyon notes that the administration's hard push for integration stirred far more trouble than anticipated, and he argues that Baylor should also seek faculty who use a complementarian approach to faith and learning. Tellingly, Sloan continues to disagree. Baylor's trouble with this form of faith-and-learning integration suggests that, while adequate for a Christian college, it may be too narrow for a Christian research university.

In the end, The Baylor Project turns out to be part history of Baylor 2012 and part apologetics on its behalf. The historical portions have a satisfying combination of the immediacy of first-person accounts, the benefit of access to key documents, and a consistent tone of fair-mindedness. All the essays help us understand the thinking of those who developed and implemented Baylor 2012. On the other hand, several of the book's characteristics—reluctance to address major controversies, internal uncertainty about the degree to which Baylor 2012 is a story of continuity or change, absence of opposition perspectives, and of course the fact that no one knows how the Christian identity question will come out—add up to the conclusion that there's a lot of historical work left to be done. Fortunately, this book will be an enormous help to those who take up the story after more of the smoke has cleared away.

—Editor's note: During the last three years of Robert Sloan's tenure as president, Baylor contributed to the support of Books & Culture.